We have been working on new tools for VR as part of RunTime and this will be available for Free in the indie pack shortly! A sneak preview of the UI 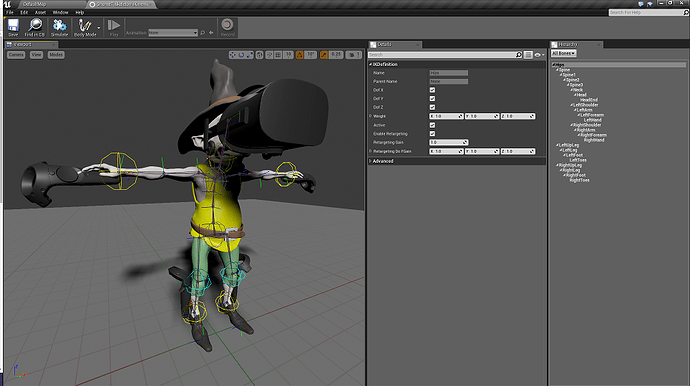 This is the solve in action

Hey Alex, is this functionality in yet?
Is there a tutorial series on implementing the Ikinema setup within a Vive game?
I don’t have any experience with an IK setup, as we are using floating hands currently.
I am wondering how easy it is to setup up and plug into my Character Animation Blueprint.

Hi there, yes this will be available in the upcoming release, not long than 2 weeks from now. We have a tutorial if you wish to have a look and prepare

I am VERY interested in this, i am currently evaluating the Indie Runtime for use in my VR games, and would love to know if there is an updated eta or beta version available, if so, guaranteed purchase for me. The tools so far are great, and i can foresee them hugely adding to our work.

This will be relesed sometime next week

@alex-ikinema - is the VR solver functionality in the current trial?

Is this feature released yet for the purchased runtime ?

Yes the feature is “quietly” released and you can grab it from your account page by downloading the latest 4.12 integration. We will do proper mailshot this or early next week, but you are free to use it.

We will share a demo VR map on this shortly.

Is this feature released yet for the purchased runtime ?

I downloaded the plugin again. The readme file shows it is version 1.12. It does not show any VR items in the changelog.
Right clicking the skeleton does not give me any “Create VR Rig” option. I tried the 4.12 plugin from the \launcher\ dir.

Should be all updated now - sorry for the confusion. The latest version with VR support is 1.13

Hi there, i purchased the indie runtime yesterday based on the vr features, which seem promising, however following the tutorial yields unsatisfying results, there is a portion of the video in which you refer to calibrating the user proportions or offsets within the character blueprint, but do not show this or clearly explain how users could find that solution elsewhere. This appears to be paramount to achieving results such as you demonstrate, could you please elaborate on the purpose and nature of the process so that we can find appropriate resources for this step? Thanks in advance.

Hi there, i purchased the indie runtime yesterday based on the vr features, which seem promising, however following the tutorial yields unsatisfying results, there is a portion of the video in which you refer to calibrating the user proportions or offsets within the character blueprint, but do not show this or clearly explain how users could find that solution elsewhere. This appears to be paramount to achieving results such as you demonstrate, could you please elaborate on the purpose and nature of the process so that we can find appropriate resources for this step? Thanks in advance.

So, assuming you have set up your project as in that tutorial, it does indeed need some extra logic outside of the IKinema features. You need a way of computing a ratio which is used to scale between your players proportions and those of the avatar they are in control of. If you do not find this ratio and scale accordingly, the movements of the player wont map accurately to that of the avatar.

I’m sure there are a number of ways to do this. A simple method I recently implemented was to begin with a calibration prompt during the start of a game.

Here, the user had to enter a ‘T’ pose (standing straight backed, with arms parallel to the floor) and press both the left and right triggers on the controllers at the same time before the VR avatar is spawned. On this trigger, the position of the players hands (tracked by the motion controllers) are used to calculate the magnitude of the distance between them (their wingspan) in world space. The same is done for the avatar provided you have a ‘T’ posed skeletal mesh (import with T0 pose as reference). Then, dividing one length by the other gives you the ratio you can use to scale the player to the avatar. This ratio is passed to “Set world scale 3D” for the VROrigin.
Here is an example of the above process with a few extra things (I used a 3rd person and 1st person mesh which I turn on and off during calibration) that take place during this calibration process. The bottom left is concerned with finding the scaling ratio specifically.

The set tracking origin and reset orientation and position, followed by locking the camera to the HMD were necessary to ensure correct alignment of the camera and avatar.

Thanks simon! Ill sit down and have a crack tonight, thanks for the comprehensive breakdown, ill post my results and any tips i stumble over to help others new to ikinema. Very promising and exciting!

Alex, this looks great. Decided to give your VR Demo project a go, however after downloading and unzipping the project I get tons of reference errors as below.

It appears that you do not have the RunTime indie plugin installed. You can download a trail version from www.ikinema.com.

I have been testing out the trial version of IKinema to see if it fits my project, and it seems that by default the player’s head height does not affect the character’s head height properly. In other words, if I crouch down, the character doesn’t crouch down (in fact it seems almost like there is no IK happening on the legs at all as I move around). I assume that allowing the character to crouch is possible with IKinema, but I would like to be sure before investing in this asset. Could anyone give me some guidance on getting this to work?

This looks exactly like what I am trying to achieve (without big success).
As mention above the crouch down and walking part is very important for me too, are you planing to release a tutorial / example on how to do it?
Also, does it support replication for multiplayer games? or I`ll need to set it myself?

This could be great and I`ll be surely buy the indie RunTime plugin.

Thanks a lot,
Doron