So i have been trying to make a ‘realistic’ particle system similar to a hydrothermal vent like the image and video below. I know it is basically smoke, but the ‘smoke’ in hydrothermal vents act a little different than smoke in air. I guess its less like smoke and more like a thick liquid flowing up through water.

Does anyone have pointers on what to try? Been messing around with it for a few hours and cant seem to come up with anything better than thick smoke and doesnt look very good =-/

Share your texture, What you’ve done so far as well.

A few things you can look at:

Share your texture, What you’ve done so far as well.

Good point. Didnt think showing what i had would really help as I dont think anything ive done is close, but now that i look at it again it doesnt seem too terrible, just needs some tweaking i guess.

The material i made is a combo of a few different bits of other materials and the texture was the thick smoke one used for the volcano in the Elemental example. 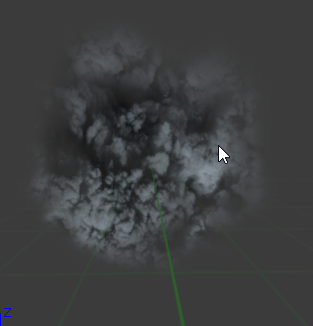 Below is where im at with the particle system, and while i think the texture doesn’t look too bad, the smoke movement doesn’t seem as naturally ‘billowy’ as most of the hydro thermal vents do in the videos i see and the thickness of it doesnt seem right. I’m really trying to figure out how to get it looking like its just going nuts churning smoke out, almost shoving the slower smoke away. I think i could live with the smoke texture if i could just get it shaping more like its forcing its way up through the water and it seems like the smoke in the RL videos is moving faster inside the cloud than out. Sorry, I’m terrible at explaining this stuff =-/

I have a feeling most of what i want to accomplish with it has to do with adjusting the material more, and tweaking the size over live, speed, etc. but I am more of a programmer type, so being able to translate what i see in my head to actual items in the particle system is the hard part and i’ll probably make it more complex than it needs to be.

Hah thanks! But there’s no way i could get that kind of realism

I did look into your suggestions and I think they are totally helpful. Now i just need to spend some time learning how to properly do some of those things. I did start a new PS that is utilizing those but im not really sure the performance impact if i have quite a few of these around my level. I think the elemential demo volcano would almost be perfect for what im trying to do, but i dont know what that would look like up close. I think the distance from it allows the designers to cheat a little and give a stronger effect while in my case, the camera will be right up next to some of these.