How to watch Blueprints in motion?

Now, I know that when you’re playing in-game, you should see changes/event chains, or whatever you want to call it while playing and the blueprint runs. I don’t see anything at all. Is there some setting for this I missed, or does this only happen under certain circumstances?

I think it’s just a bug. I have one test project where I added some nodes to MyCharacter, and even though the debug prints get called and are visible on the screen, the lines leading to them never light up. I have no work around, just sympathy for you.

Be sure that you choose to specify which Blueprint you want to watch from the Blueprints Dropdown menu, see this thread: 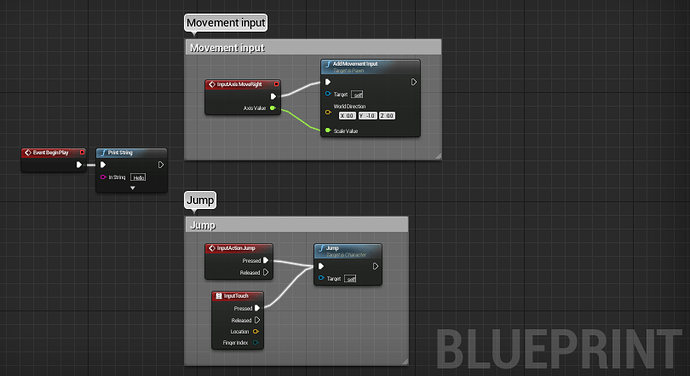 Blueprint execution wires not lighting up

I’m in the side scroller template and looking at the MyCharacter blueprint. I don’t see any of the wires lighting up when playing the game. I added a begin play event too, and that doesn’t light up either, although it does work. I see the level...

Ah hah. yes, that worked for me, although this is crazy unintuitive. I never had to do this for any other BPs, just this character one… Also mycharacter_c is only listed in the dropdown after hitting play and once I’ve clicked to move, I can’t get focus back to the BP editor to select it.

Press Shift+F1 to regain mouse control then re-select your Blueprint. The Level Blueprint usually runs by default, for other Blueprints you want to watch, you’ll have to select them to watch them.

Thank you so much for the excellent support. You rock Wes!