How to set particle system along bone?

I’m trying to set a burning effect, which will be applied when my character casts spell. As I read about some official document, there is a way which can emit particle at location right at the bones/sockets, called Bone/Socket Location module, but as I tested it, I found that it wasn’t quite satisfactory as it can only set particles at ends of bones, not along the whole bones, so the result would only be some flames coming out at certain points of my character’s arm…

So I’m confused, is there anyway I can attain the effect of flames burning along the whole set of bones of my character’s arm, not just some points on they?

Considering a socket will rotate along with a bone, you could for example set a socket to the arm, then use whatever the correct axis is and set the emitter initial location to a range that’s covering the entire arm (for each bone separately then to have the correct rotation).

I set my particle emitter initial location to X=0 min and X=30 max and attached it to a socket on upper arm and forearm. It’s probably not the best animation to display it on, but you can see how it follows along the bone somewhat.

Is this the kind of effect you were looking for?

You can spawn particles from vertices/triangles of mesh. There are also some functionality to mask this effect to just some bones/materials.

Thank you both for your advice.

To Jenny Gore,
Can you explain how should I do that mask functionality? Or would you give me a tutorial? I can’t find any discussion about my question, don’t know if that’s a wrong choice of key words, or just nobody ever disturbed by this problem… 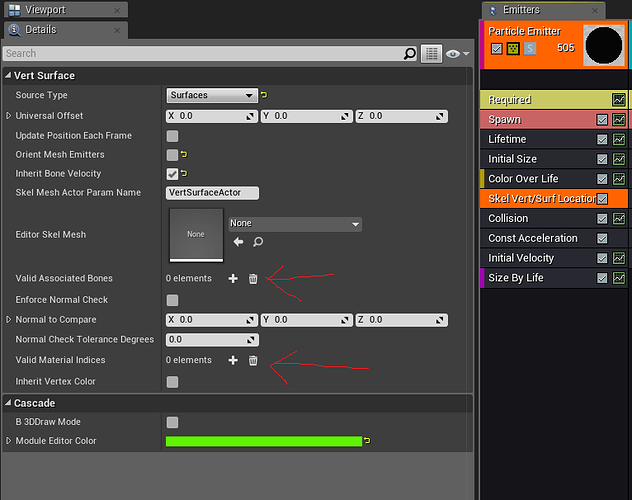 You have two options. Either you limit particles to certain bones or materials.

Thank you both for the answers again.