How To Modify Navmesh Settings For 4.13 VR Template?

In the 4.13 VR template room scale map, how do I alter nav mesh settings for the Motion Controller Pawn so I can teleport to higher up planes, such as on top of the box that has all the grabbable cubes?

The behavior in my map matches the green navmesh areas, but I don’t see how to alter the navmesh settings like Max Step Height and Max Slope:
-the VR Pawn doesn’t seem to have its own step height and slope settings
-changing those in Project Settings -> Navigation Mesh has no effect on the navmesh

I want to teleport high, low and onto ramps, so I: 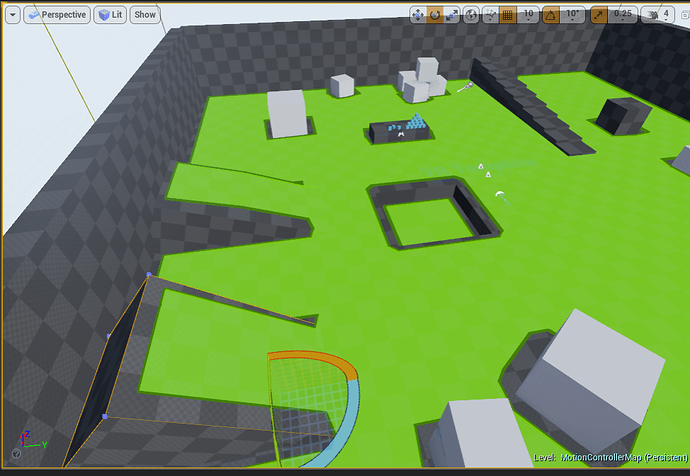 This is my 1st month with Unreal, so I assume I’m missing something obvious. Thanks

I am starting to look at teleportation and running into a problem or two. It must be said that I am a newcomer to UE, so to get as far as I have its been largely through trial and error (more error than not!) and trawling through forums and youtube videos. Its been a hard slog.

I have managed to use the Virtual Relaity template in UE4.13 and create a new level (a box for a floor and a 2.5m cube in the space for something to navigate around). Somehow (!) I have managed to get this working with the MotionControllers (the grabbing hands) and the teleport functionality. Cool!

Here is a screengrab:- 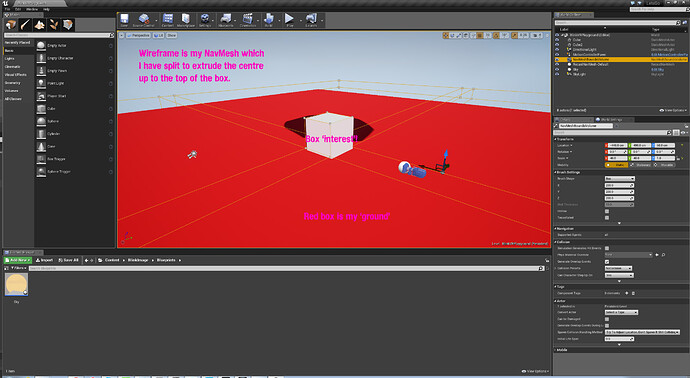 I solved my OP issue.

My NavMeshBounds didn’t extend along the Z axis to cover my lower and higher areas. I solved by extending the NavMeshBounds hugely along Z, so it exceeded the floor and ceiling. Now I can teleport to every elevation in the bounds.

From the image, it looks like your bounds is even with the box top. Suggest scaling it to be well above the top. Hope this helps.

Thanks Guyal - your suggestion of scaling in the Z seems to have helped.

See also the “RecastNavmesh” object that should appear in your Map’s World Outliner window in the Editor.