How to make movable line trace with player's forward direction?

Socket Location is in World Space and you always add in Worldspace Y Direction. If you want to Add something in a relative Direction get Forward,Right or Up Vector from your Actor or from the Sockets Rotation (depends on your needs) multiply it by a float and add your Socket Location to it. The bottom Part looks good to me (assuming you left Z out for a reasson)

If I missunderstood your Question scribble it out on http://sketchtoy.com/ what happens and what you want to happen. I get back to it in time.

Hey all!
First:
So I’m trying to make a line trace by channel to detect player’s forward direction & it’s all working
tried to move the start & end of the trace by timeline upward & it’s working & the out hit array is every point from his from the Pelvis to the head!

The Problem:
when I tried to move the trace left & right of the character for start I thought it was working! but when I rotated my character to a different direction it got weird movement!
the rotation is good! as I rotate the trace rotate with me…
If I faced a direction let’s called east, it goes perfect as I wanted from left (center of the character) to right (away from the character) the same goes for west!
but when I face let’s say north the moment of the trace become from forward away a little bit, to the character (like a knife in stabbing movement)

Question:
How can I fix it? I want it always goes from left to right no matter what direction I faced!

like what you see the timeline is linked to Y,
if I linked it to Z it will fix the other direction but the first direction will not be working anymore…
I know the idea of why it’s not working, but can’t fix it… 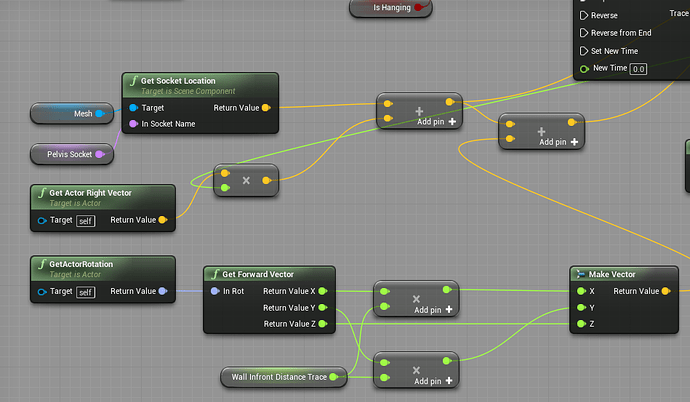 now this working perfectly! Thanks!