I already have the sprite sheet and uv sub images set up and everything. Just trying to figure out how to animate it. 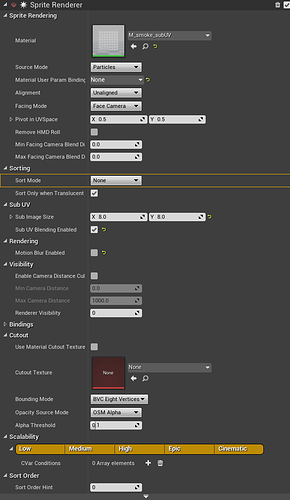 Have you tried the “Sub UV Animation” module in your Particle Update?

Just added it and it isn’t doing anything.

This is what I have the properties set to: 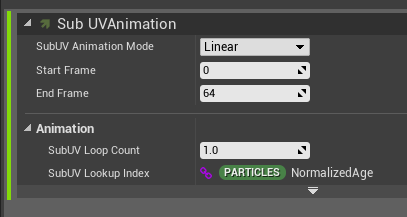 Is it stuck on the first frame, or are you seeing the entire SubUV sheet on your particles?

For me, the SubUV Animation node in the Particle Update stack will make the animation play over the lifetime of the particle.

Yes, it’s stuck on the first frame, and doesn’t appear as the whole sprite sheet.

Unfortunately, I’m not a total expert with Niagara, and I won’t be able to resolve your problem.

At least you tried, guess I’ll be waiting for someone else to see this post then.

Update: I noticed that the particles seem to go to the next frame right before they get killed, so I changed the “SubUV Loop Count” property to 10 and it started animating now.