How to Loop ai?

I have two target points all I’m trying to do is make the ai go back and forth.

In BT make sequence and 2 nodes Move To, In first one select first taget position (stored in Blackboard) and in second - second target position.

When AI will move to acceptable radius of 1 target it will then finish execute of first Move To node, etc…

this depends on your setup. Are the target points within the character BP or do they resist as a target point in the world and you store em as reference in an array? Only two target points or an unlimited number in the future? Are you using the behavior tree?

For my stuff I personally use the BT. I have an array of e.g. type target point as reference in my character BP (well it’s technically not on the character BP, but for the sake of this example it doesn’t really matter). Within the BT I get the target points from the array and store the actor location in the Blackboard. Then I move the Character with “move to” to that location. 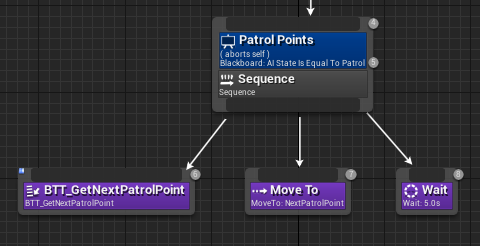 My BTT next patrol point checks if the last target point has already been reached and then starts again with the first entry = loop. This is an example of one of my first projects I was working on and maybe it’s not the best way to do it but you will get the idea. Also it’s not exactly the solution you are asking for because I was able to use an infinite amount of target points.