How to load variables to a server from a client's save Game?

hello everyone I am building a multiplayer game where a player is able to pick there name, and save that variable to a savegame. How can i make it so that their name from the savegame displays on the server.

Is this even possible? If anyone knows how to do something like this, that would be awsome. Because i’ve posted several times on the forums but no one seems to answers. This is a crucial part of my game, and i need it working before i can continue.
Plz help!

WHAT I HAVE TRYED SO FAR: The player loads up a menu that asks them their name, they type it in and it makes a savegame to their computer. Then, when the player joins a multiplayer server, when the game starts it launched an event on the server that sets the text above the players head based on the clients variable.

THE RESULT: is that everyone is named the exact same name. So if i named myself caelan, and joined a game, now suddenly everyone on the server is named caelan! This obviosly is not the desire effect. Because they should display their own name above there head.

What about having an array of say 16 players, and as each person logs in the server matches their name with the variables in the array? I want to say Replication, but you probably know that already.

Okay so like i assume that i would create the array in the level blueprint. but im not sure what you mean by “Matches their name with the variable in the array”
I figure i just want to have each player named the appropriate name based on their save game. 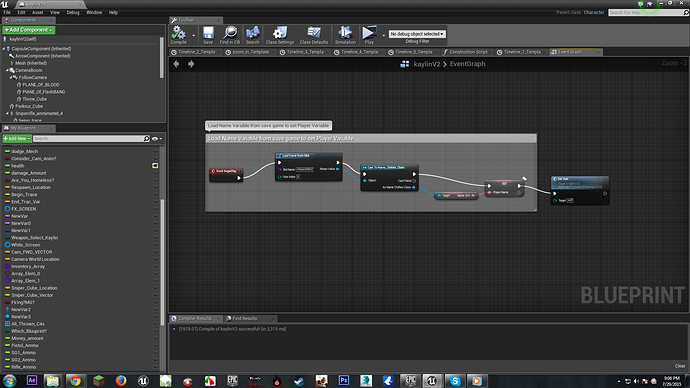 here is what i have so far, on the character blueprint, the player will load, the names from the save game onto the player. But even so If you remeber THE RESULT, thats what happens the wrong name is above the wrong heads.