The question is, I try to display a simple background, the frame is about 15 fps, but the graphics usage is only about 20% and 10% respectively. Is there a reason or a way to increase the fps by increasing the graphics usage? 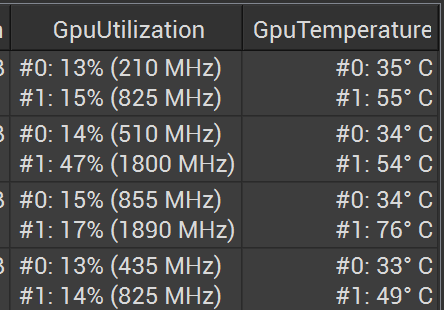 I found it. It seems to be affected more by genlock than graphics usage.

I put a genlock source of 60fps and it came out 30fps and I thought I solved it.

but not solved my problem
Half the frames of all genlock sources are output. If you know a workaround, any help would be appreciated. Current cable change, monitor change, sync generator change, graphic driver reinstallation 472.47&472.98, Windows 10 reinstallation, system initialization and reinstallation, half frame problem has not been resolved yet.

Having the same issue with low frame rate. Runs fine in editor over 100fps but when launched in ndisplay frames under 24fps when using 24fps genlock sync. Tried older drivers, but same issue with using 4.27.2 and still have not been able to solve issue.

The EDID in windows Nvidia topology was limiting the FPS capabilities when ndisplay was rendering to the wall. I only have single 4K output, single render node but the 2 a6000 GPUs were at around 20% max while FPS was stuck in red 12-15fps. You need to create custom EDID for the resolution and genlock sync refresh you will be shooting at.

You are right. When I tested, I tried to create edid, but first of all, 24fps>24fps 30fps>30fps with cvt rb standard, but 60fps still output 30fps. The level used the default ICVFX LEVEL.

Thank you Timizims11
I succeeded in genlocking multiple syncs by changing the edid. Thank you.

Hey @RvSeok we are having the same issue,

only running our ledwall with rendernodes 01 and 02, we get our 25 fps genlocked sync. though if we add rendernode 03 for the roof ledscreen we only get around half the performance so 15 fps. so not realtime, we treid alot but cannot figure it out to get it running realtime with all nodes. we followed this page exactly except the mosaic part. nDisplay Synchronization with NVIDIA | Unreal Engine Documentation

Any idea what the problem can be? and or could you maybe explain your process in a bit more detail?

First of all, the biggest factor that dropped frames in half when I used them was the EDID issue. Can you change or check the EDID of the controller before outputting the LED?

Hey! We fixed it indeed by correctly configuring the edids. The problem was that we had 2 EDIDs corresponding to the different LED controllers we use, Brompton and Helios megapixel.

And we had to configure all the edids using the megapixel led controller! so that they all 3 pcs had a helios EDID instead of 1 pc a brompton edid and the other 2 Helios.

Does it mean that it was solved by reflecting the EDID of Helios megapixel?

Glad you solved it! I also had two edids.

Hey! It was solved by hooking up all 3 renders nodes to the helios one after the other. and running the edid setting procedure as described by the unreal documentation. After this we hooked everything up to their respective led controllers. so rendernode 1 and 2 are going in to a megapixel helios. and render node 3 in to a brompton led controller. BUT with a helios edid.

to be clear, in the end the problem was indeed that rendernode 1 and 2 had a helios edid and rendernode 3 had a tessera(brompton) edid. the brompton edid did not play well with unreal and helios. as a result half of the fps.

But now that we have the helios edid on rendernode 3 we are essentially tricking render node 3 in to thinking that it is hooked up to a megapixel helios. and that was our fix.

Thanks RvSeok, lets stay in touch!

Thank you so much for the useful insignts on the half FPS problem. I am setting up a studio right now with 4 render blades hooked up to 4 brompton processors and we tried following the NVIDIA synchronization page line by line from the Unreal documentation but still came across this problem. We setup the EDID files one by one on each render node while it was connected to its intended processor + Wall zone in the NVIDIA control panel by exporting and loading it into the control panel and now Unreal Maps that were running at 36fps before genlock sync + edid setup are running at 12 fps. Infact, everything is running at 11-12 FPS which is just half of the 24 FPS we set in genlock device + nvidia control panel custom resolution + brompton tessera canvas properties. I am going to follow PlanetXAmsterdam1’s advice and export just one edid file from nvidia control panel on the master machine and load it onto all 4 render blades. I will report back to you with the results on Monday but please let me know if you guys have any more aces up ya sleeves against this issue.

Thank you so so much again.

Did this work for you @TetraHydroCannon?

to be precise, we didnt copy paste ONE edid to each machine. but hooked up all the machines one by one to the same LED processor and then did the edid procedure. after this we just followed the steps in the documentation.

Hello guys! sorry seeing this right now. We do have the same edid, exported from the processor connected to the first node/render machine, across the different GPUs in the 3 different render machines. We can now get 24FPS on our LED wall. Will try out your recommendation of generating edid by connecting each render machine to the same processor and generating an edid and report back.

Thanks so much again guys.