How to get detailed control over depth of field blur

I would like to have detailed control over depth of field blur: strength, distance at which it starts, distance at which it ends, separate controls for foreground and background blur and tilt shift options. So far I haven’t been able to find how to do that: the cinematic camera uses a realistic model (not quite what I want), while the normal camera gives only a few options and they don’t quite seem to do what I want.

I saw that Airborne Kingdom gives exactly the controls I want in its Photo Mode: 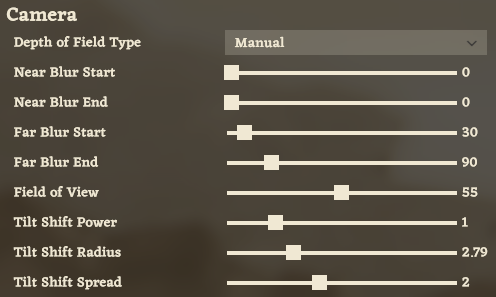 That’s made in Unity however. So I was wondering: how to achieve something similar?

I thought the Depth Of Field Blur settings in Unreal would do most of what I need, except for not splitting foreground and background blur. However, I can’t get these settings to actually behave as advertised. Are they broken, or is there some odd way of tweaking these to behave as expected?

Note that I need depth of field blur (and optionally tilt shift effects) in both the main view and in a smaller screen-in-screen view (which I currently make by rendering to a texture using a SceneCaptureComponent2D).