I’m running Linux. I’ve gone to the marketplace website but can’t find any way to download any of the content. It cunningly provides a method for me to pay for it, but not to actually get it.

How do I get content that I pay for?

You can run the epic game store on Linux using Lutris. I have not tried downloading marketplace content but it is worth a try.

So Epic don’t provide me with a method of accessing something I might have paid for, I have to use a Linux community provided work around? Which judging by the comments doesn’t work anyway…

I may possible be wasting my time here… 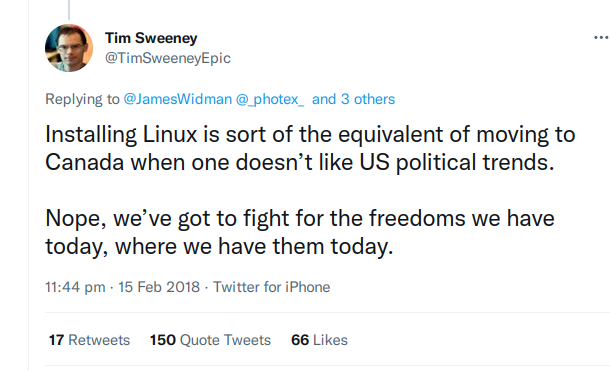 So the various clients written for native Linux are broken because Epic have introduced a captcha.

So , the only option left is to dual boot my system, borrow someone elses Windows machine or try Lutris which, looking at many of the comments is a 50/50 chance at best.

Using windows in linux virtual machine is also an alternative

Nope. doesn’t work. The Launcher checks for the graphics card and a virtual driver doesn’t cut it. It point blank refuses to start. 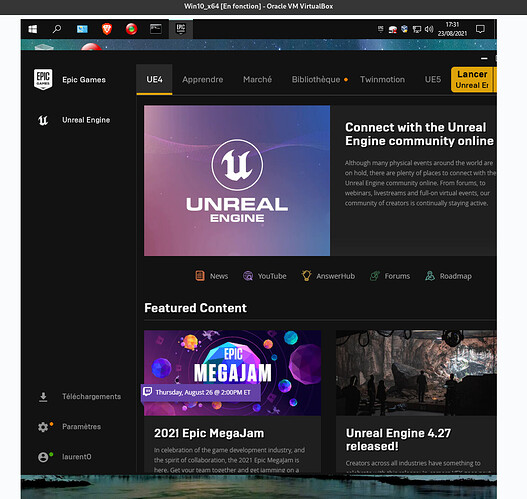 It’s SLOOOOOW !!! but it works

Could you advise on what you did? Seeing how Epic is giving us zero support whatsoever.

Hi,
I’ve made it a few month ago, I don’t remember precisely what I’ve done .

It seems to me that…

Finally it was rather simple to solve.

Note that I’m sharing folders and drives between my windows 10 Guest and My Linux Host.

All my Linux projects are installed on folders that I can “see” from my windows guest (so on ntfs partitions).

The engine versions I use are installed in both OS.

As it, when I install a plugin in an engine version for Windows, I can copy its content to the SAME version of the engine but on its Linux installation. So,If the plugin is compatible with Linux it will be rebuilt and it could be loaded in the Linux version.

For downloading some project contents , I create a project with the Linux version then I add the asset to this project from my windows 10 guest , then I work with the project on Linux.

For “full project” assets, I create the project from the windows 10 version and I open or convert it from the Linux version

I presume that the same workflow can also be applied when running the “Lutris version” of the launcher.

I Hope it will help.

Thanks for the detailed response. I’ll give it a go and see where I get to.

Unfortunately that video doesn’t apply to Virtual Machines, none of it works for fix the Launcher in a virtual machine.

I’ve found lots of post with this problem. No answers though.

The settings is to apply to any windows 64 system that has graphic issue with the launcher, virtualized or not.
It seems to me that it was the only issue I’ve had when I wanted to run the launcher inside VirtuaBox.

And I know that Epic won’t give support in that case , that doesn’t mean that is it not possible !

What is your issue with epic launcher ?

It refuses to run - just says the graphics card is unsupported. The youtube video fix doesn’t work. Neither do any of the fixes around WARP or opengl switches, compatibility modes, run as admin etc etc that I’ve found. Reports of it not working seem to outnumber the claimed fixes by at least 10:1.

There are poeple who have it working but there’s no coherent pattern of how. It appears that if you got it working you were just very lucky.

Very strange indeed, because an OS running in a virtualbox will have nearly the same detected hardware to run on, depending on the virtual manager settings.

Perhaps You should try to change some settings of your virtual machine.

You could create your virtualbox machine for windows 10 and compare your .vbox file with mine to see what could explain what causes the fail

As far as I can tell my settings are identical to yours, except you’re running Win10. Looks like you’re running a 5.x something version of VirtualBox as 2D Acceleration was got rid of in 6.

no, my VB version is up to date: 6.1 (I’m on arch linux)
but the virtual machine was created months ago, with an older version, perhaps the config file kept traces of that
You said that I’m running win10, not you ? because it’s a HUGE difference no?

Win 7 is what I’ve got in a VM. Never used Win10, never needed it. Not sure I’d even know where to pirate a copy these days. And honestly I’m not sure it’s worth the hassle given that ignoring this issue completely, I can’t even build the template games in Linux. Nothing about UE seems to work on Linux, not convinced it ever will given Epics attitude towards Linux users.

Thanks for the help and all, but UE seems to be dead end on Linux.

I’m using UE4 on Linux without issue, even with C++ scripting.
Only the download of content could be painful, and some plugins that are not compatible with Linux

You really don’t have to find a “copy” of windows 10.
Its ISOs can be downloaded for free on microsoft website.

You can use it for free too
After 30 days , you need a key to activate windows.
If not, some customization options will be disabled but you could still use it !!!

If you have an activated windows 7 legal version, you could try to gain a win 10 key by upgrading your system. Sometime your official key would be updated too.
More info here