How can i do high quality reflections without raytracing in lumen?

Is there a way to change the quality of low poly reflections? 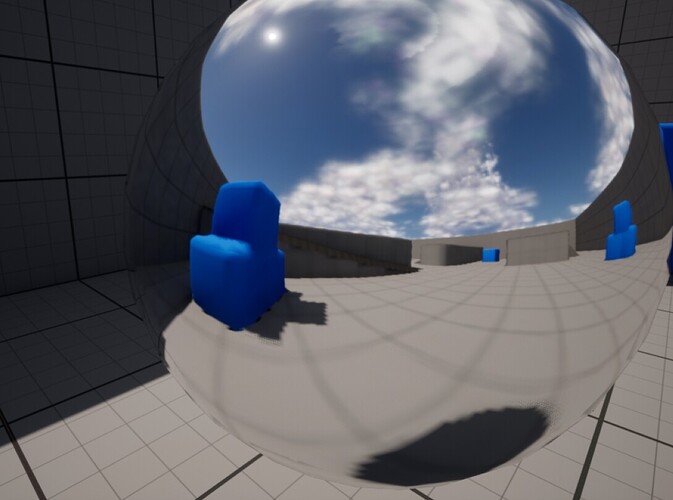 There is not without ray-tracing, unfortunately.

Everything is blobby because the scene representation that non hardware RT lumen uses is made up of signed distance fields- it doesn’t matter what they are, but they do not and cannot match the scene geometry. Post-process volume settings will let you include more objects in the scene, increase some aspects of the quality, and reduce noise, but only hardware RT can really make a close match between the game scene and the lumen scene.

it doesn’t matter what they are, but they do not and cannot match the scene geometry.

I mean, you can bump up the quality of the distance field representation by a LOT before degrading performance…
It doesn’t have to look like a blob…

I mean, you can bump up the quality of the distance field representation by a LOT before degrading performance…
It doesn’t have to look like a blob…

How would i do this? Where is the option?

On each of the mesh.

A reference page for all the Mesh Distance Field settings that can be found in the Project Settings, Light Components, Static Mesh Editor, and individual Actors.

Distance Field Resolution Scale This enables you to adjust the quality of this Actor’s generated Mesh Distance Field. This setting has an impact on the size of the volume texture that is created.

Nothing changes. Guess i’ll stick to the blobby reflections.

There is no reflection capture since these are real-time lumen reflections.

Oh, then that won’t work!

There’s also a “Quality” setting for Lumen in the Post Process Volume, documentation says it might affect this quality, but I haven’t tried it myself.
You can also turn off Lumen reflections in the project settings I think, and use reflection captures instead?
I’m not at the workstation right now, so I can’t verify, so I’d like to hear the result here too

If you want to have high fidelity reflections, you should use ray traced reflections, instead of Lumen. But in UE5, ray tracing is broken and Lumen is broken too, so… I would use UE4.

How are standalone RT reflections broken in UE5 vs. UE4? Similarly, what’s wrong with lumen reflections? They’re built on very different pipelines, but I’m curious what the distinction is between different behavior and broken behavior.

As we talked in the GI thread time ago, Lumen reflections were poor and not as defined as RT ones, also showing black areas in some meshes.

RT reflections are also broken because in some situations (I can’t find the sense), some objects creates a halo around them. I opened a (totally ignored, of course) thread about it.

So, for me that means to be broken, as they are weird and not working as supposed (I hope!)

The only distinction you’ll get from here is probably " What I became accustomed to using this sh*t show of an engine" and “What no longer works the same as it used to which never made any sense anyway”.

If anyone used anything else programmatically, they’d be screaming bloody murder at the engine worse than the FCC was about Privacy/Inverted Buttons forcing you to buy - just recently

At any rate, the reflections in ue4 have had issues for years. Run a search in the forums for “metal black”. There’s a billion compromises to make just to make the reflection (or box, i prefer box) capture work correctly in PBR materials…