Looks pretty great. I’m curious, what are you doing to make it feel like a space opera? There’s a little je ne sais quoi required to capture that feel. I’m quite interested.

The realistic space opera line is self-contradicting, really. Star Wars for example is anything but realistic on pretty much every level (still awesome). We’re two developers and we’re both engineers, we love hard sci-fi, so we wanted to create a world based on actual physical constraints, and still keep the awesome of Star Wars or Battlestar Galactica. We simulate heat, cooling by thermal radiation, our guns fire smart shells, we have a Newtonian flight model and no sound coming from outside the ships. We stay in orbit around a single planet and we don’t have time travelling, laser-firing spaceplanes.

What we want to give the player is freedom to explore, or trade, or fight other factions, and a setting that makes it interesting. Games like X3 would let you build gigantic fleets of warships, but there wasn’t really anything to do with it. So we’re trying to build a world that gives you a lot to discover, doesn’t try to destroy you when you’re playing nice, gives you a challenge and a reward for fighting. We want the player to organize large battles on his own because he’s following a plan, like in a Total War game, but we don’t want to make that a vital necessity (like in a Total War game).

TL;DR: What we really mean in realistic space opera is that it’s a mashup of different game styles.

Today’s news : we have a production system with the production and storage UI ! 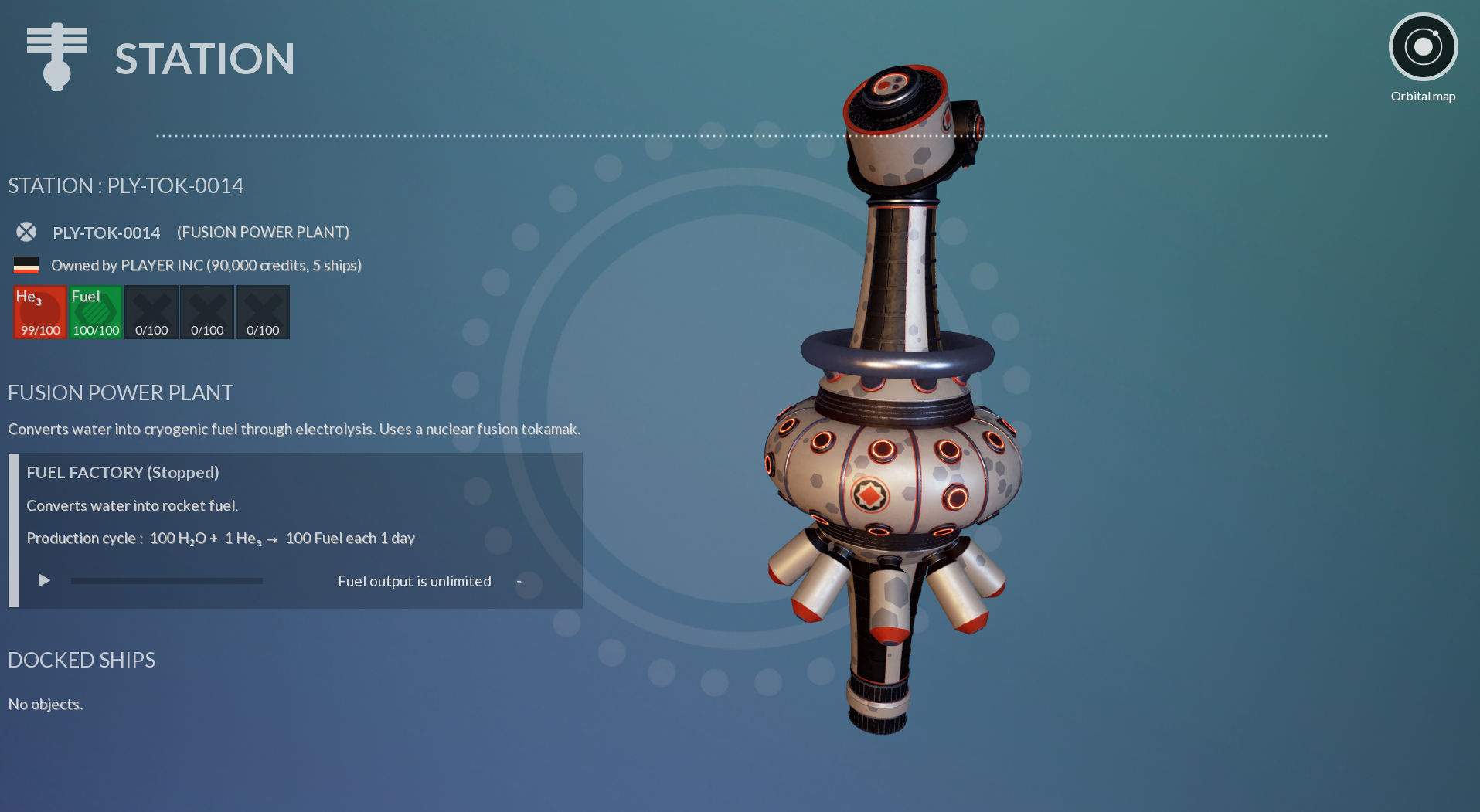 Some news ! We’re gearing up for Steam Greenlight in a few weeks. We’re still working on trading and economy, and the art side is moving to station building. You’re going to see more and more different stations in the future.

Here is one of the latest screenshots, directly from the game…

Another day, another new ship to show off ! 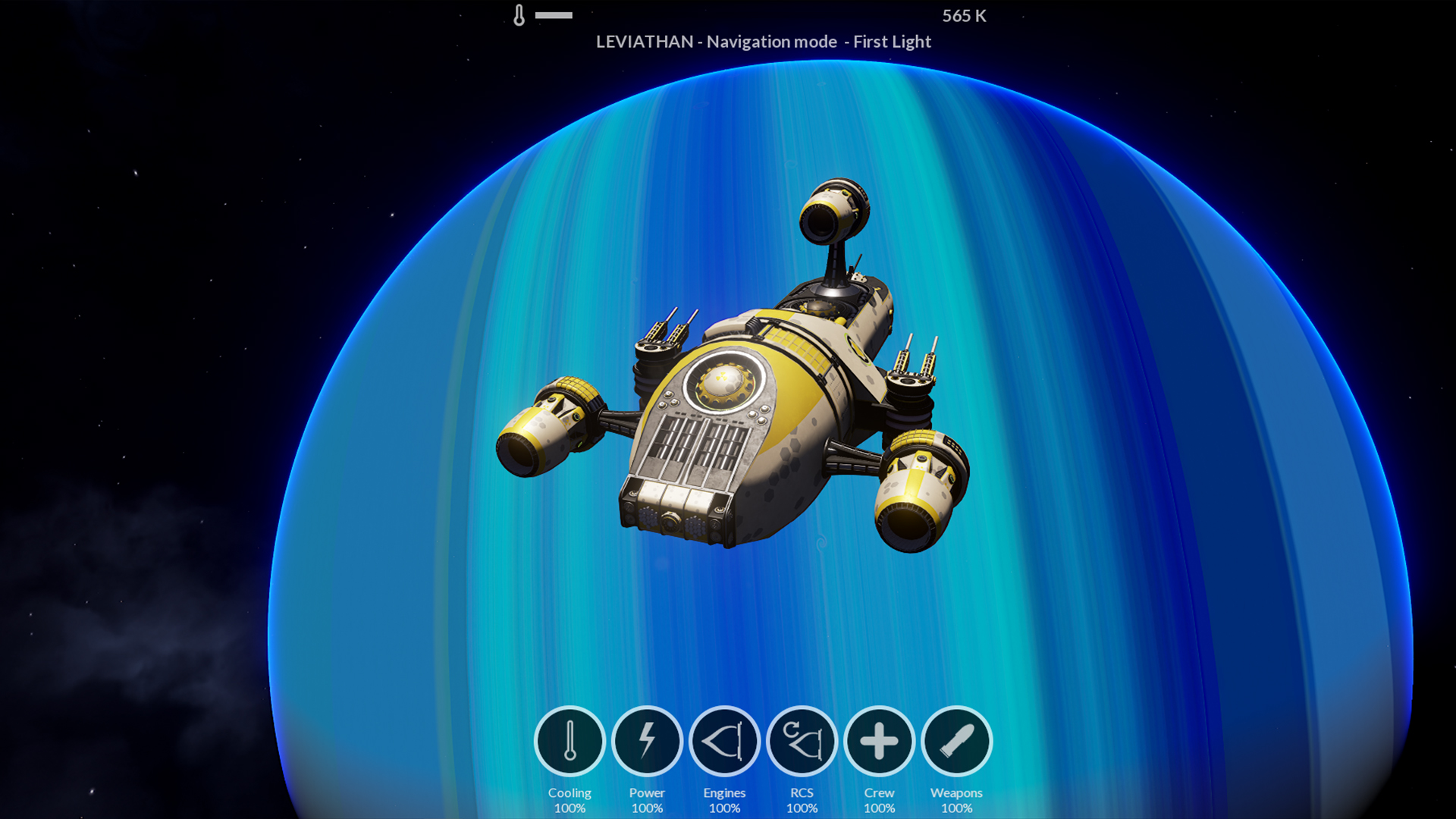 this is looking great, love the style and menus so far, gives me a maxis vibe.

Looks great! I have a couple of questions if you don’t mind…

Thanks and keep up the great work!

Like others said your Slate UI is really well done, that settings menu is amongst the best I’ve seen with UE4 to date. So you’re not using any UMG at all in here? Great work in any case.

We’ve been 18 months at this, with a team of two. It’s going slow because there is so much stuff to do, but it’s getting there.

Well space is mostly empty so we base navigation on collision avoidance, not on pathfinding. Ships go were they have to (next dock, next target…) and avoid obstacles in the way. For every object, we compute potential trajectory intersections, and how far they are. If a trajectory intersection is near, we thrust in the direction opposite to the other object’s trajectory. It’s a basic algorithm, works well in 2D or 3D.

A complicated part was to handle the ship itself, since we have 20 to 30 individual thrusters on every ship - all contributing, all destructible.

Like others said your Slate UI is really well done, that settings menu is amongst the best I’ve seen with UE4 to date. So you’re not using any UMG at all in here? Great work in any case.

Thanks ! No, we keep to Slate and C++. We’re both C++ programmers at heart so Slate was fine, UMG didn’t even exist when we started, and it’s still not interesting for us today.

I t looks like a Space gun. Awesome.Question: How do you use blender? I have blender but not know how to use it to change the model presented to me. Oh and is it the Pixar’s Blender?

Well if you insist !

Looks great, what happens when ships fly near / into planets?

This looks great, I can’t wait to see more. I will definitely be following your devlog!

There is always more ! 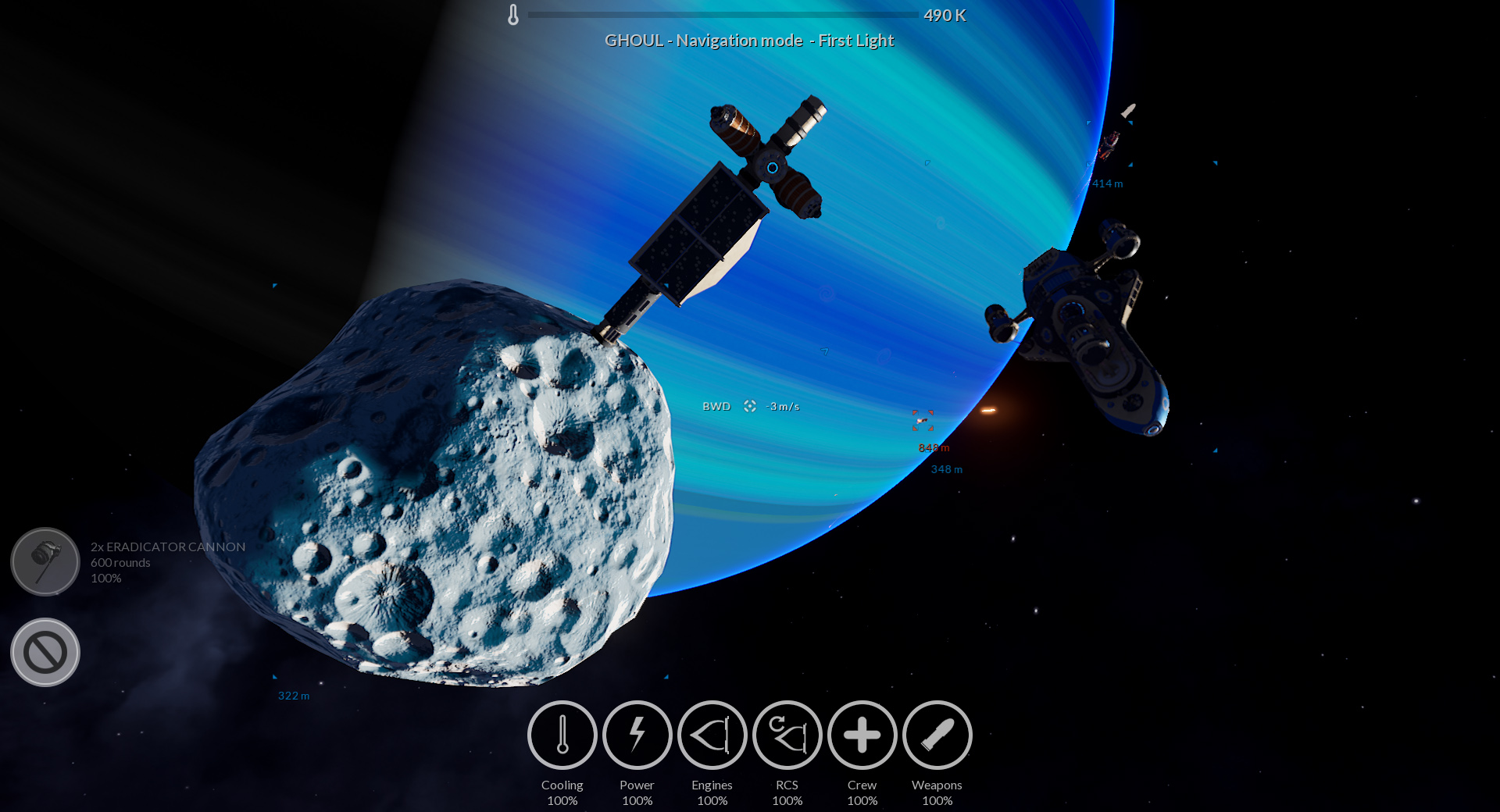 Looks great, what happens when ships fly near / into planets?

They can’t. Space is really really big and the battle above happens 1500km above the surface, going a few m/s isn’t going to get you there.
The game is cut into small (a few km wide) areas where stuff happens. Ships fly from one sector to another. We don’t let the player fly outside a sector.

We don’t let the player fly outside a sector.

Interesting… How do you enforce that? …Invisible barrier, self-destruct, stall-xyz / velocity halving algo, warning countdown, other…?

I would love to know the philosophy behind the awesome spaceship designs. Some really interesting visuals, and combined with that snazzy UI, just <3! And dat gif!

I am very impressed.

I would love to know the philosophy behind the awesome spaceship designs. Some really interesting visuals, and combined with that snazzy UI, just <3! And dat gif!

I am very impressed.

Well the basic philosophy is to make them logical. Large ships need a centrifuge section for the crew, fighters have a hull shape that minimizes the cross section when attacking, engines and weapons are modular attachments, every ship needs dozens of RCS thrusters… We have a lot of exposed radiators as well, because in the real world that would be a necessity. The ISS actually has a very large cooling surface as well, for example. We put solar arrays on small craft, nuclear reactors on largest ships…

Once you’ve got all these constraints, it’s really just a matter of designing a hull around all those components so that the ship makes sense.