Here is an example of one (There will be platforms and stuff in the middle): 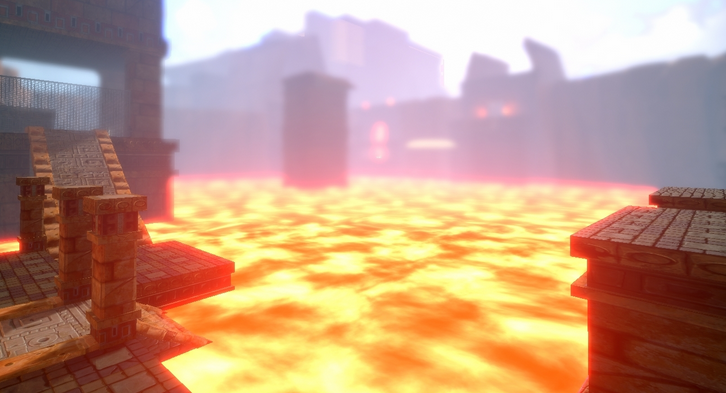 I would like to have embers/distortion floating everywhere to give that ‘hot’ feeling, as well as lava bubbles
growing and popping in the lava. How would I set up the particle system for performance?

I can stretch one particle system across the entire thing, but then wouldn’t it still be rendering particles way off in the distance or behind the camera that don’t matter?
Would it be better to place around lots of smaller particle systems (that can be occluded, LOD’d, etc)?
I thought about attaching one to the player and having the particles be in world space, but then they’ll still show when he goes above the lava, etc.

Any tips on how to setup a map-wide particle system?

The bubbles could be done inside the material, and I think with some experimentation you could do the distortion with a post process effect, as I believe particle systems culling culls the whole system rather than just the offscreen particles.

Is it possible to attatch the particle system to the player with a set radius?

just attach them to, or enable them when close to player.
You can use volumes and a variety of other things to enable disable/fade out the vfx.
I wouldnt use a particle system for a map-wide thing.

Okay, it looks like there’s no easy solution to this, so yeah I’ll rig somethin’ up so Particles can be attached/detached to the player based on certain conditions.
(Ie: He enters the swamp, and a smoke particle system attaches to him, and detaches when he leaves the swamp)