I defined an anim asset in an actor:

Then in the blueprint inheriting from that actor, it was assigned a blendspace1D (created in the editor).

Then at a point id didn’t need it anymore and deleted the variable in the code.

When i wanted to delete the blendspace1D in the editor, it warned me that references to it still existed in all the actor blueprints.

I forced the delete (as there couldn’t possibly remain any trace of it since it had been erased from code).

Now every time i open the editor, i get messages of missing ref, and the ref viewer of every BP still shows the ghost ref. 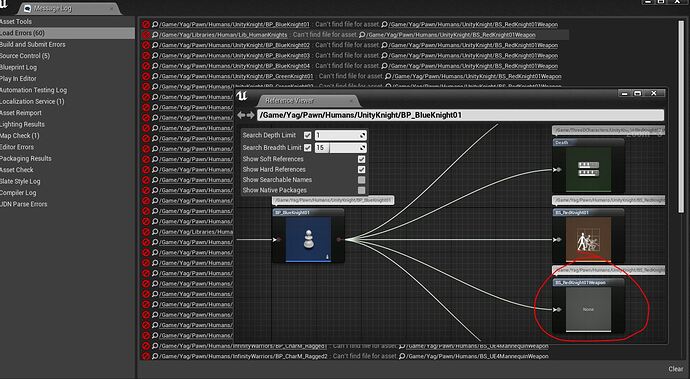 Everything else works fine and i can work with no trouble, but still this doesn’t smell normal.

Is there a cache somewhere i should clean or is this a real problem ?

Thank you for reporting this issue. I was able to reproduce this and have entered a bug report for this behavior which you can find here: UE-44361. While testing this, I did find a workaround for the issue however. While I thought using “Fix up redirectors” would work, it didn’t end up changing anything. On a hunch, I tried moving the affected blueprint asset to another folder and that got rid of the reference. Moving the asset back doesn’t seem to restore it either so this should be a suitable fix. Depending on your references, you may want to fix up redirectors after making this move though.

Thansk Matthew, both for the answer and the workaround !