Raji: An Ancient Epic is an action adventure game set in Ancient India. Raji, a young girl is chosen by the gods, to stand against the demonic invasion of the human realm, her destiny to rescue her younger brother and face the demon lord Mahabalasura. [HR][/HR]Teaser

We are Nodding Heads Games, situated in Pune, India. Raji: An Ancient Epic is our debut game. It’s been few months since we’ve we decided to go indie to make the game we always wanted to.
As we work towards our prototype, we have created a little teaser. We will be updating the project as we make progress. Thanks

We’d like to present our WIP environment for our game Raji: An Ancient Epic. This is the first draft of what we made of course we’ll be iterating before we can say it’s the final look. Do let us know on your thoughts about the environment.

Really digging the atmosphere! I’m really glad to see a game that tackles some of the rich Indian history / lore. Keep us updated!

Hey @Spectronaut and @CoquiGames Thank you! We will be posting updates very soon

Just added our environment’s first draft to the main post. Do let us know what do you think 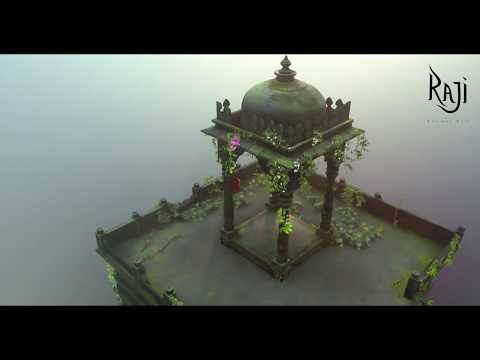 Wow…this is beautiful! Will definitely be watching for updates.

The environment looks great. Looking forward to seeing how this progresses. =)

Wow…this is beautiful! Will definitely be watching for updates.

The environment looks great. Looking forward to seeing how this progresses. =)

Looking great! Waiting for more info about the game:)

Hi guys, we have spent a lot of time and energy on our environment and the art direction.
Below is a one minute long environment video. Please let us know what do you guys think of the iteration. 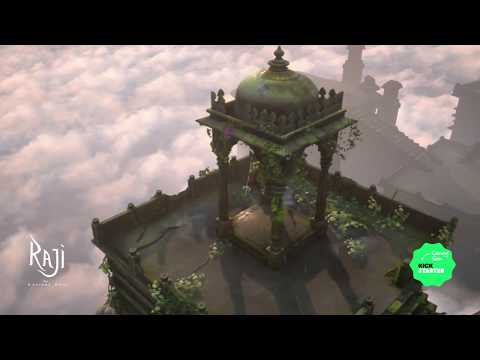 @Makis thanks for your comment, we will be releasing a lot of info regarding our project in the coming months, make sure you follow our facebookor twitterto know it all

Below are the initial environment sketches that were done for the game. These sketches reflect our early inspirations for the project, the architecture of Rajasthan. The medieval era of this part of the country flourished with grand architecture projects. One can witness massive Forts(includes the world’s second largest fort, it’s gigantic!) throughout the region, along with the jaw dropping hand carved stone work across the state.

Our artist and founder Shruti, who holds a traditional art background was quick to grasp all of it and mend it to our game. The sketches below are the very first sketches of the game, we feel we’ve come a long way in the past 10 months and yet our journey is just getting started. Our next update will be about Character artstyle, make sure to follow us! 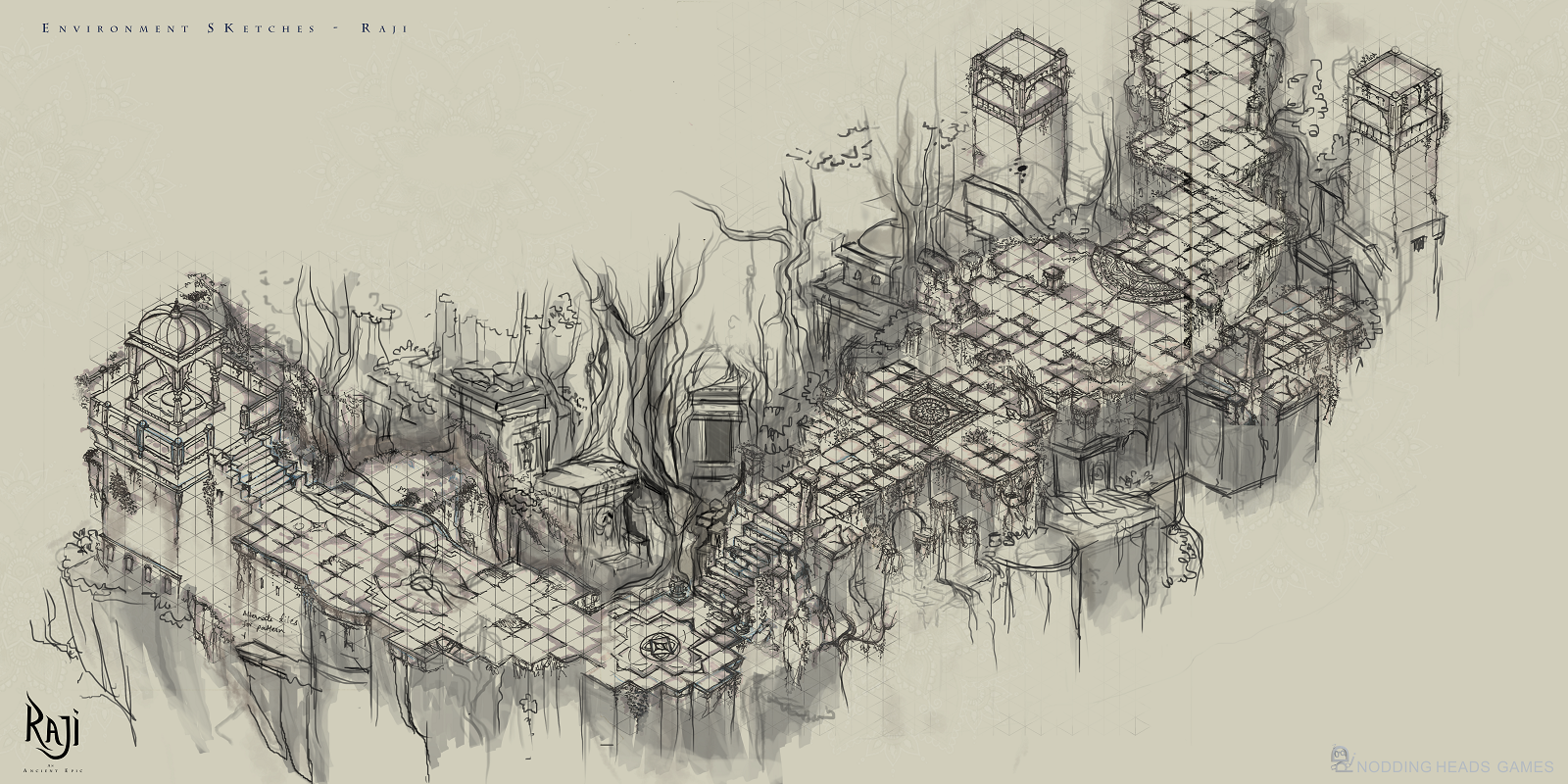 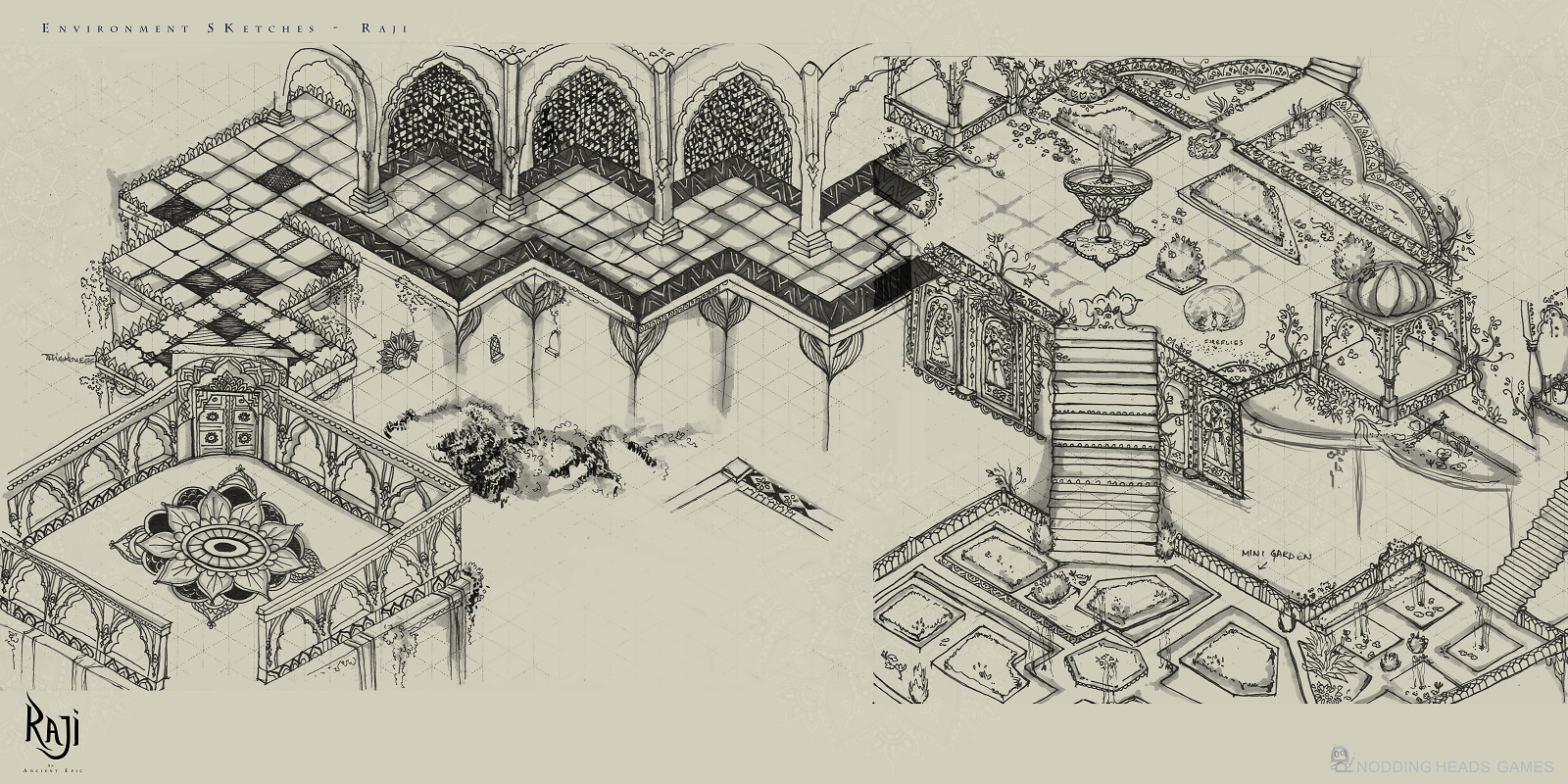 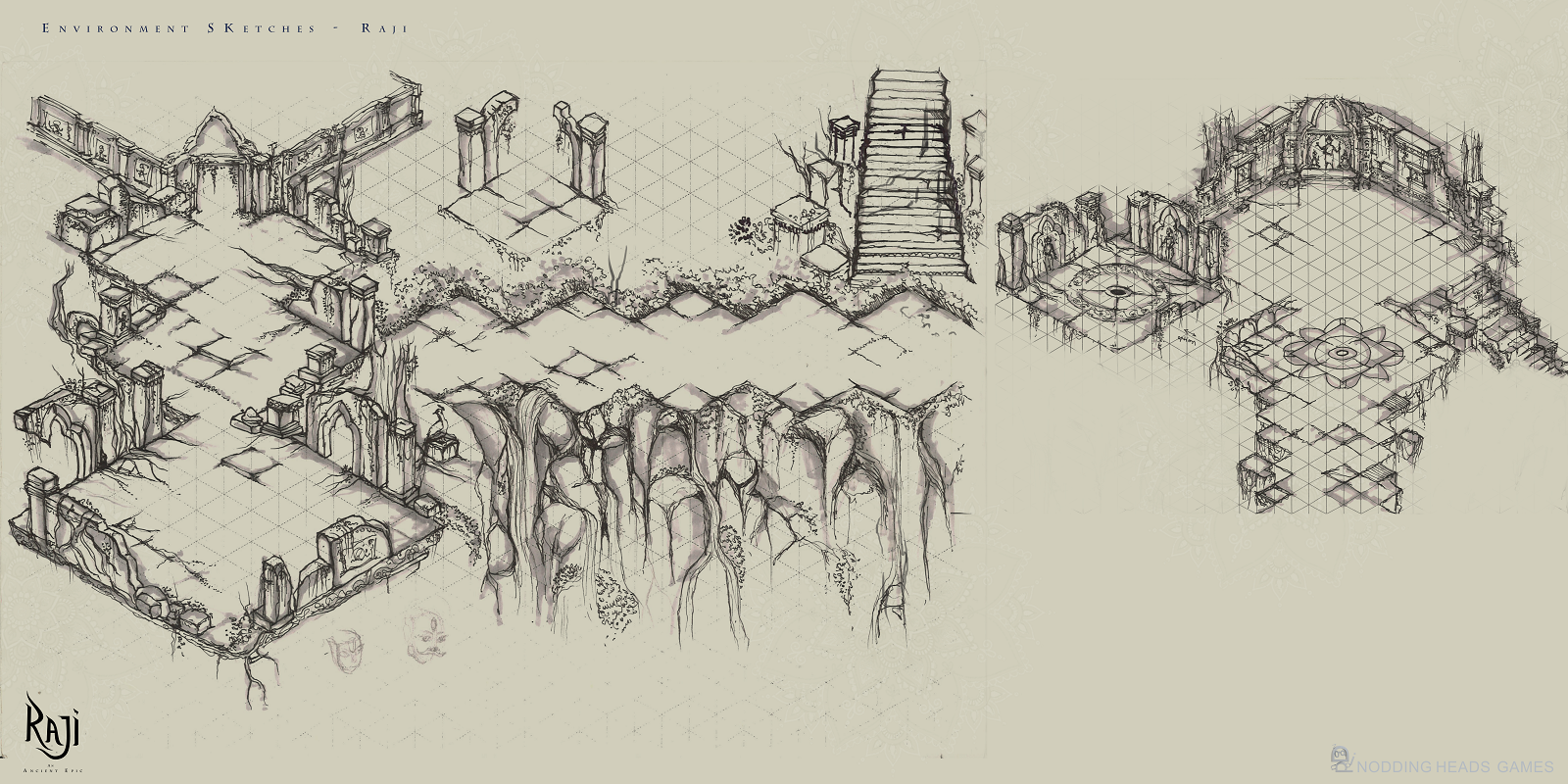 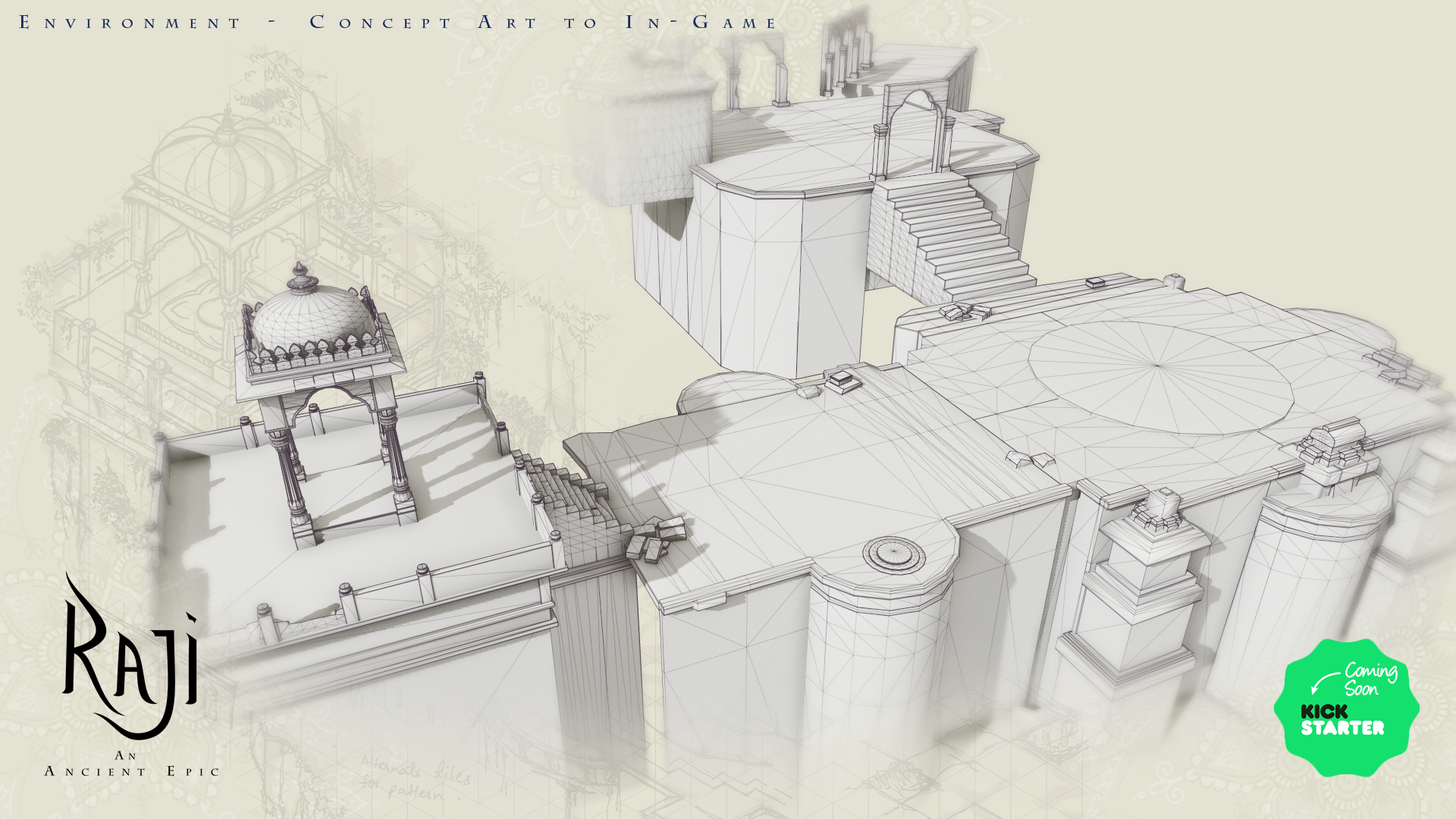 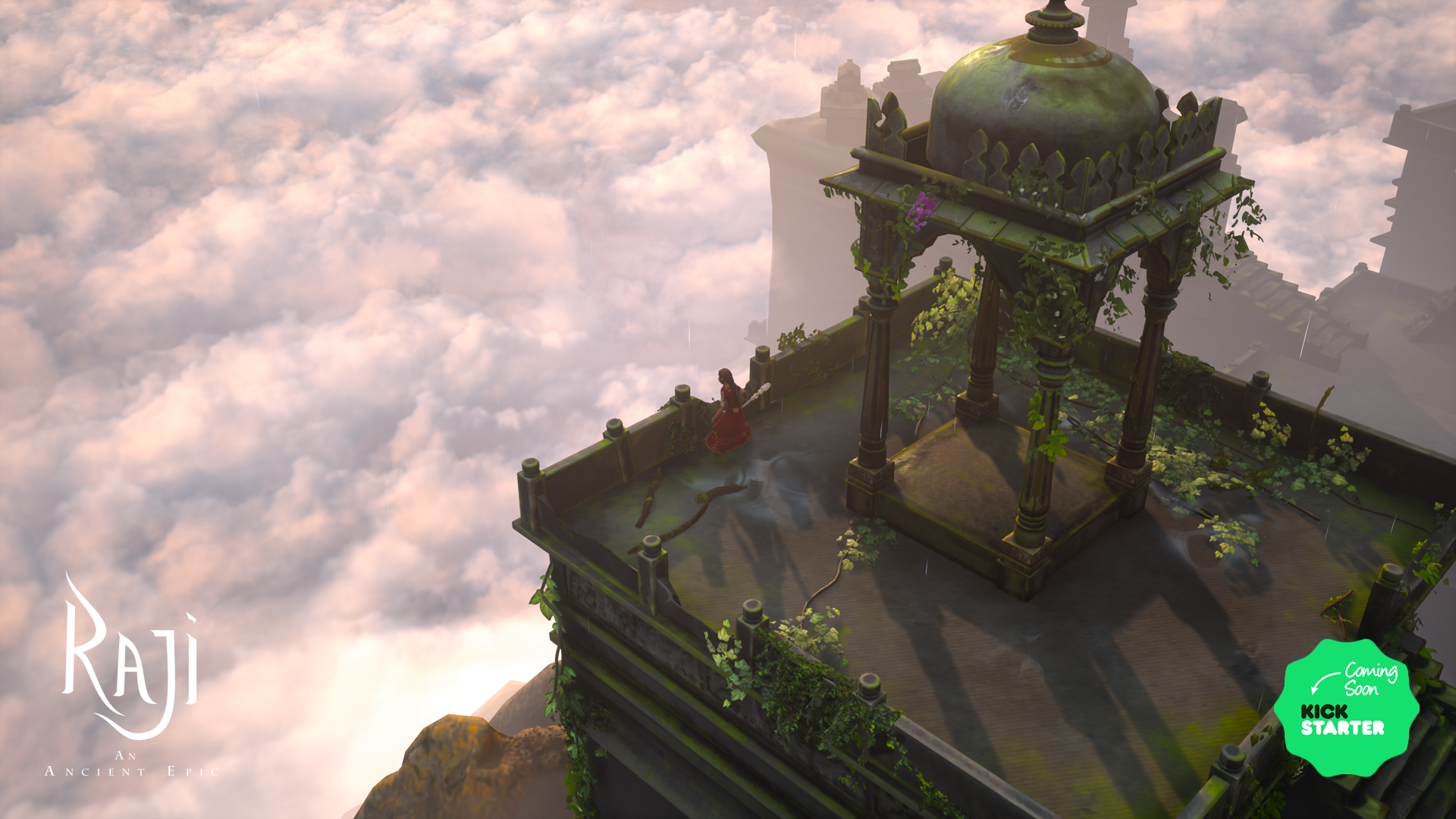 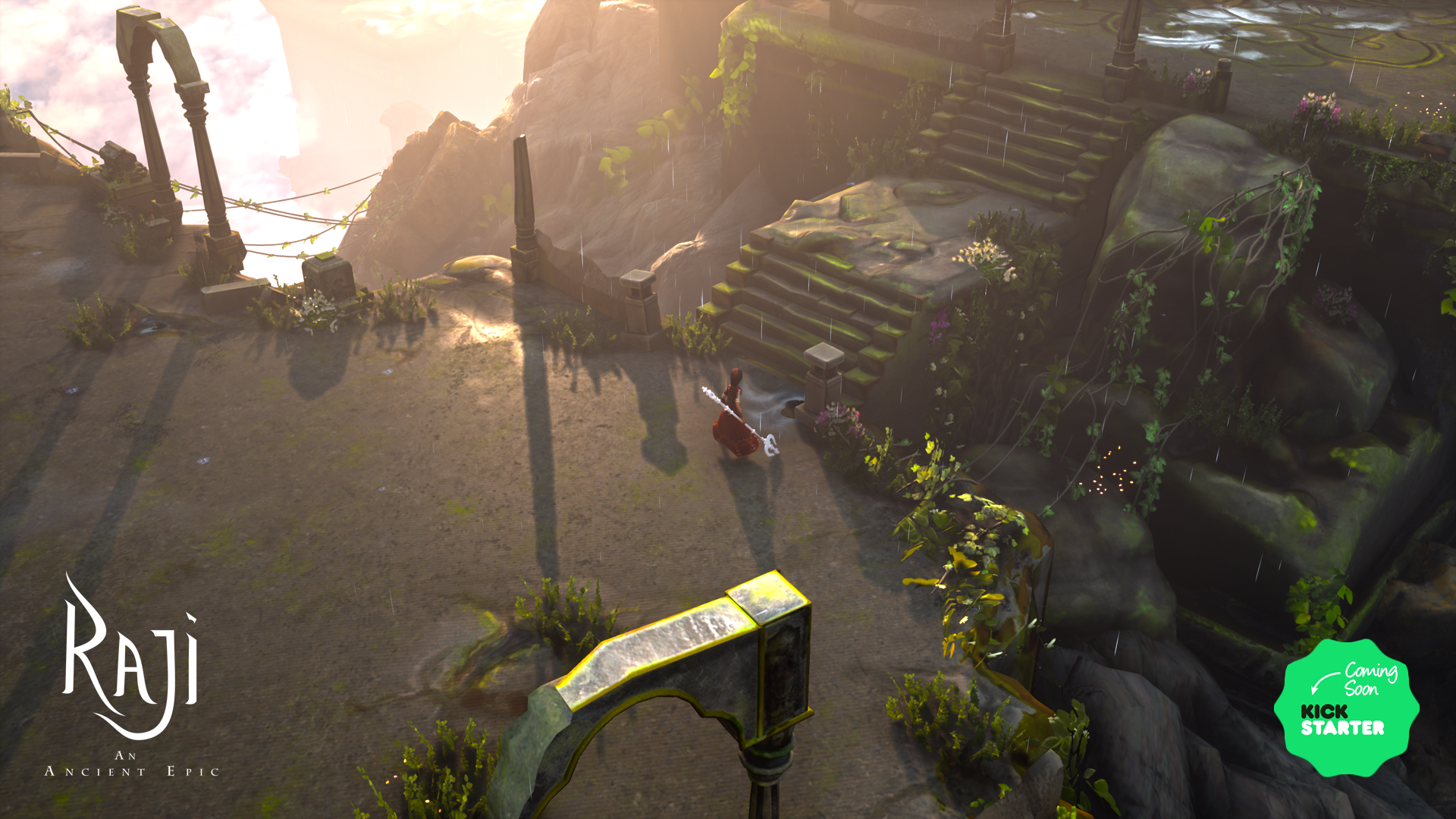 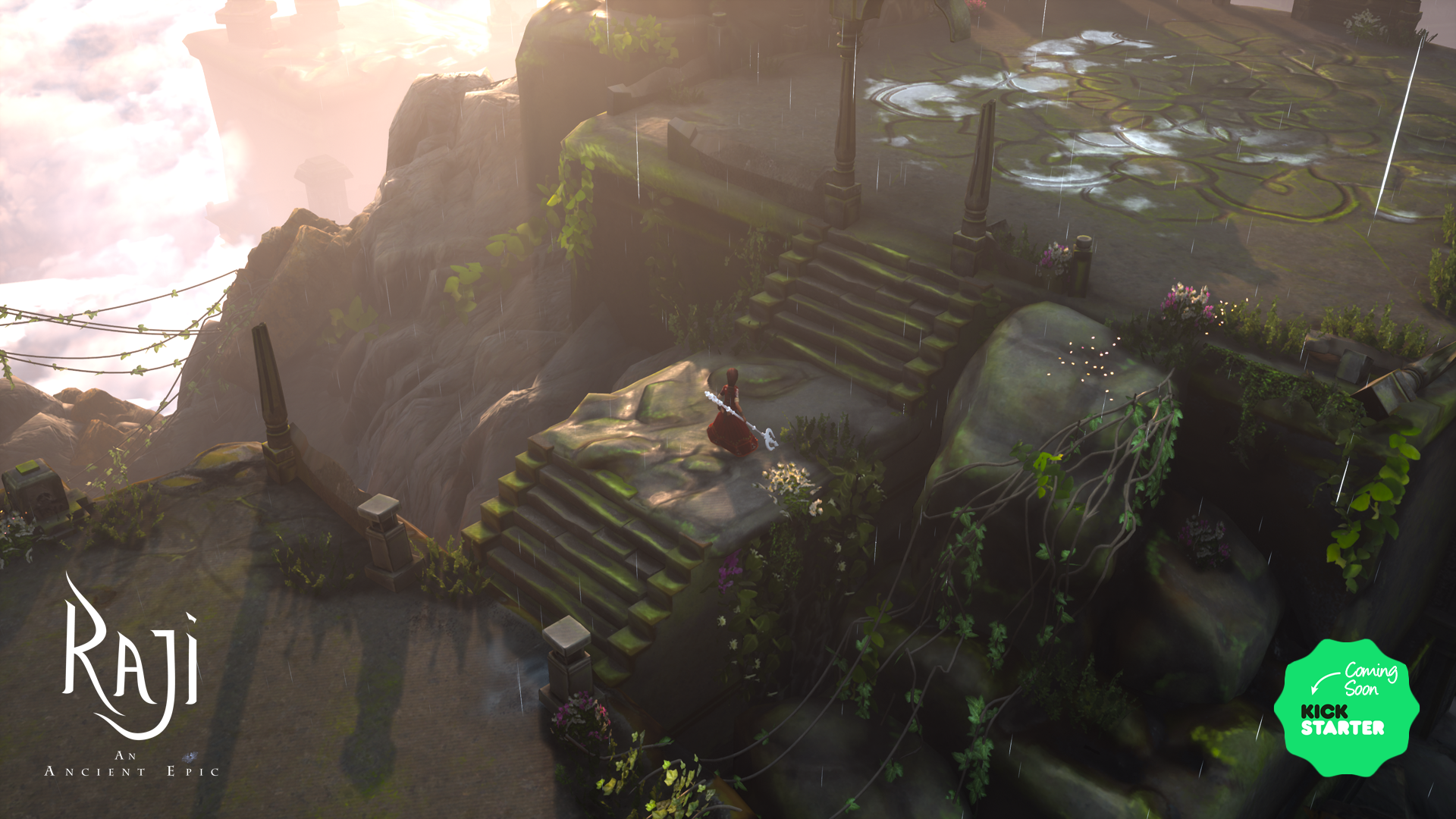 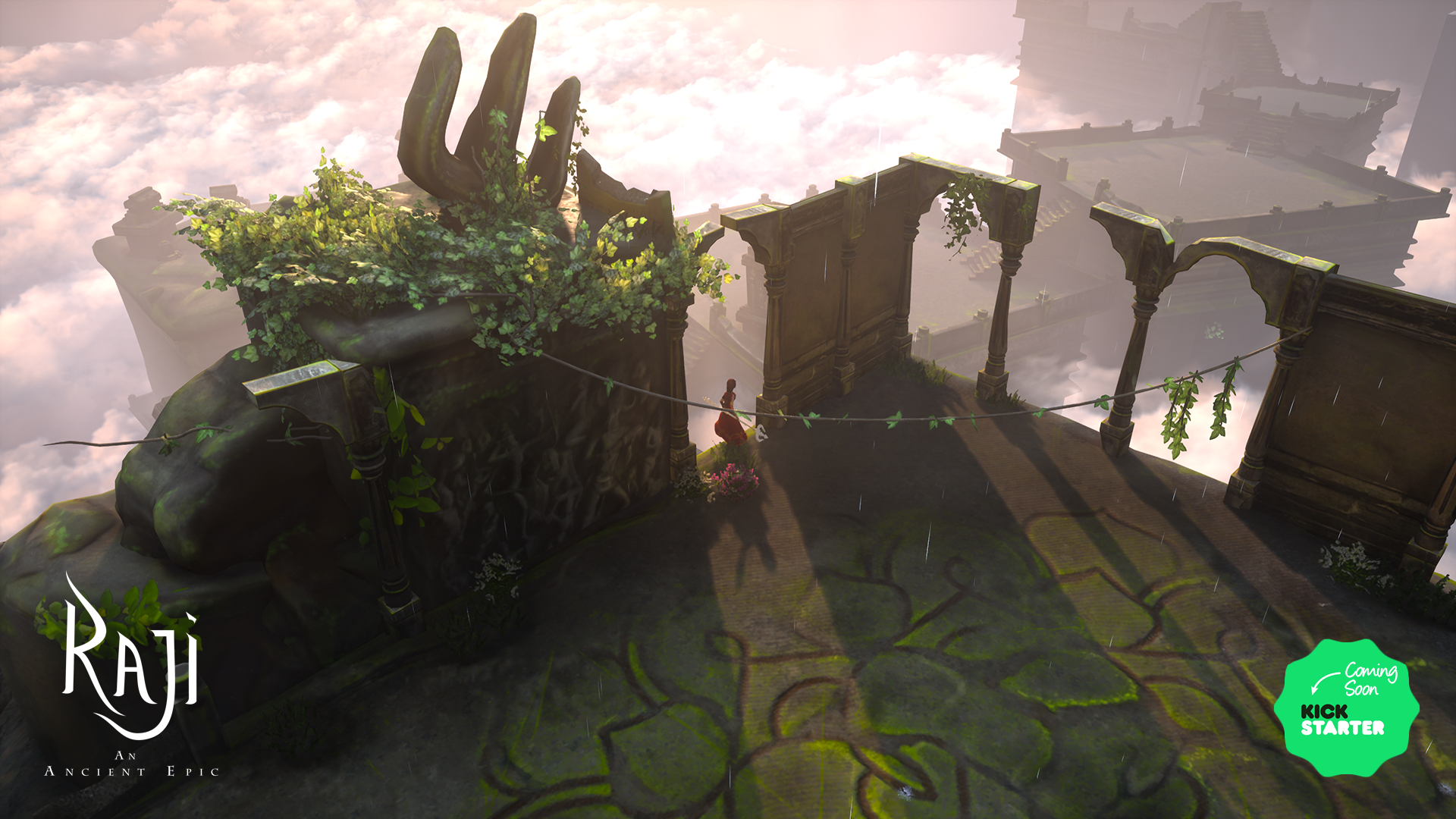 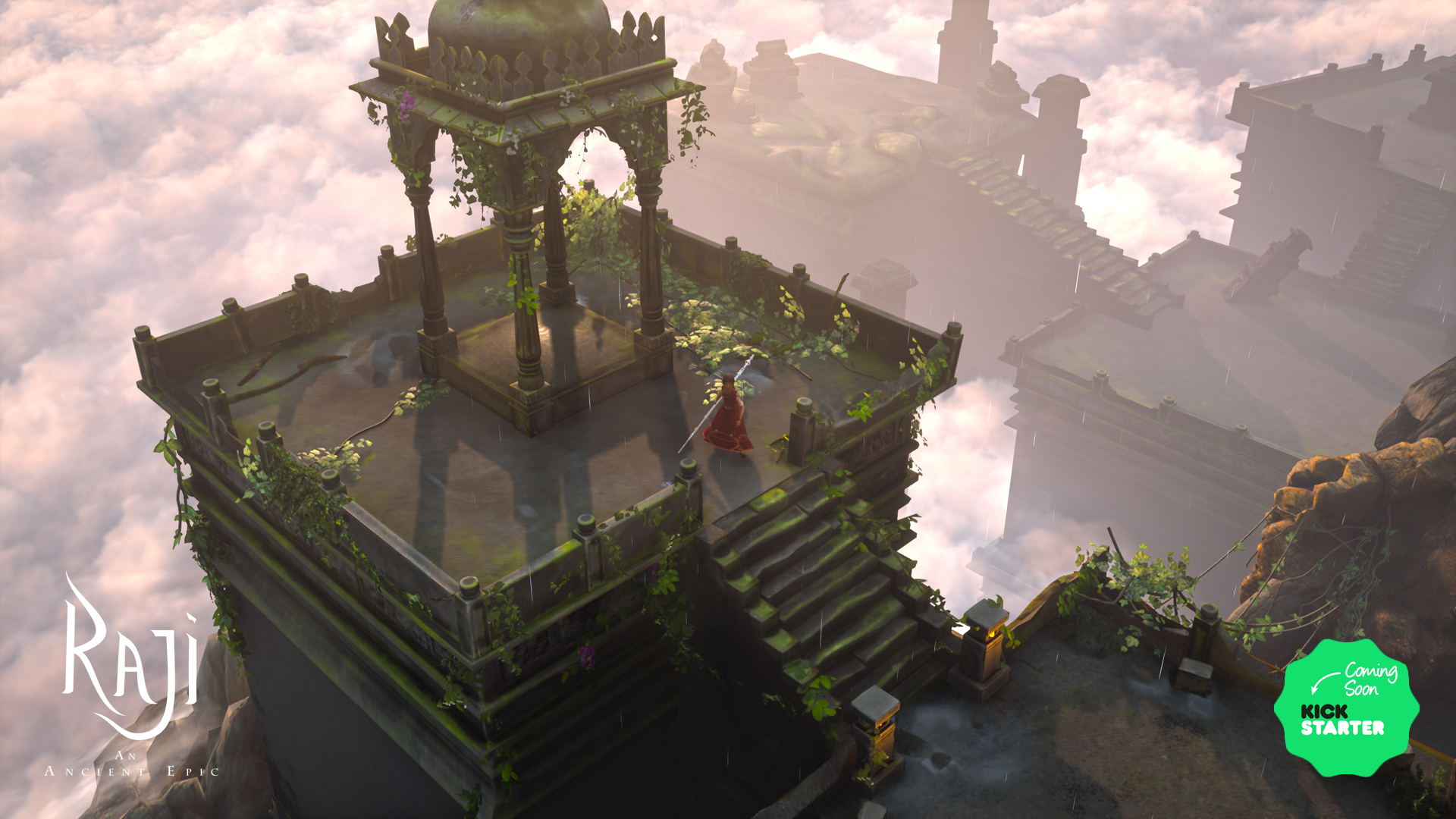 Character Creation of one of the Demons

Hi, what you see below is a glimpse of the exploration and iteration of our demon Gadasura, a mighty mace demon in the universe of Raji: An Ancient Epic. Threatening as always, these demons can wreck havoc to the front lines of an enemy formation, skilled through generations of training mace combat, these demons will prove quite a challenge to Raji.

We have utilized various software’s like Marmoset, ZBrush, Max, Maya to achieve the output. Below you can see various phases of what we’ve achieved through the iterations. To know more about the character creation/artstyle you can watch it onour Youtube channel over here Character Creation/Art style Part 1. 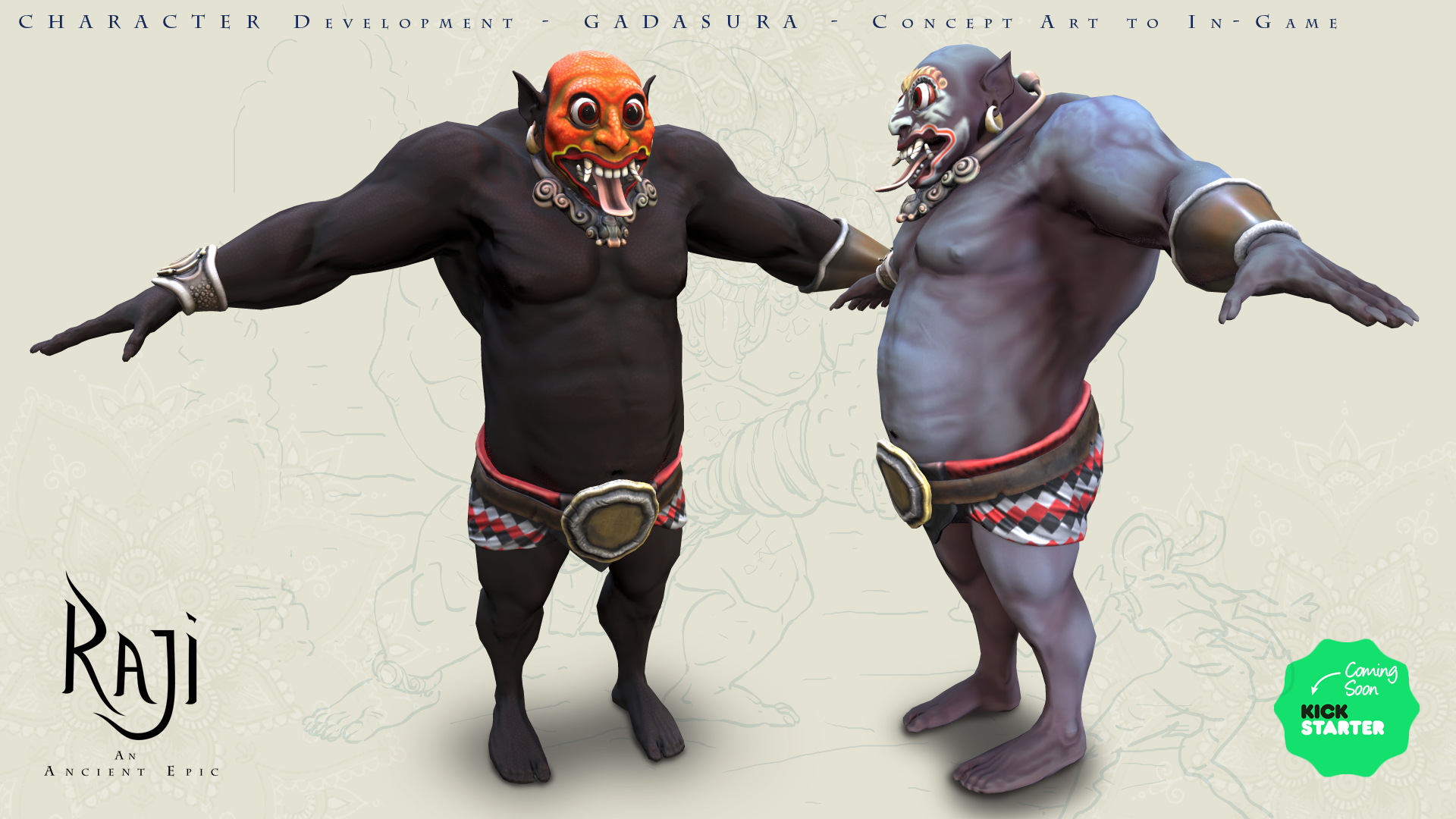 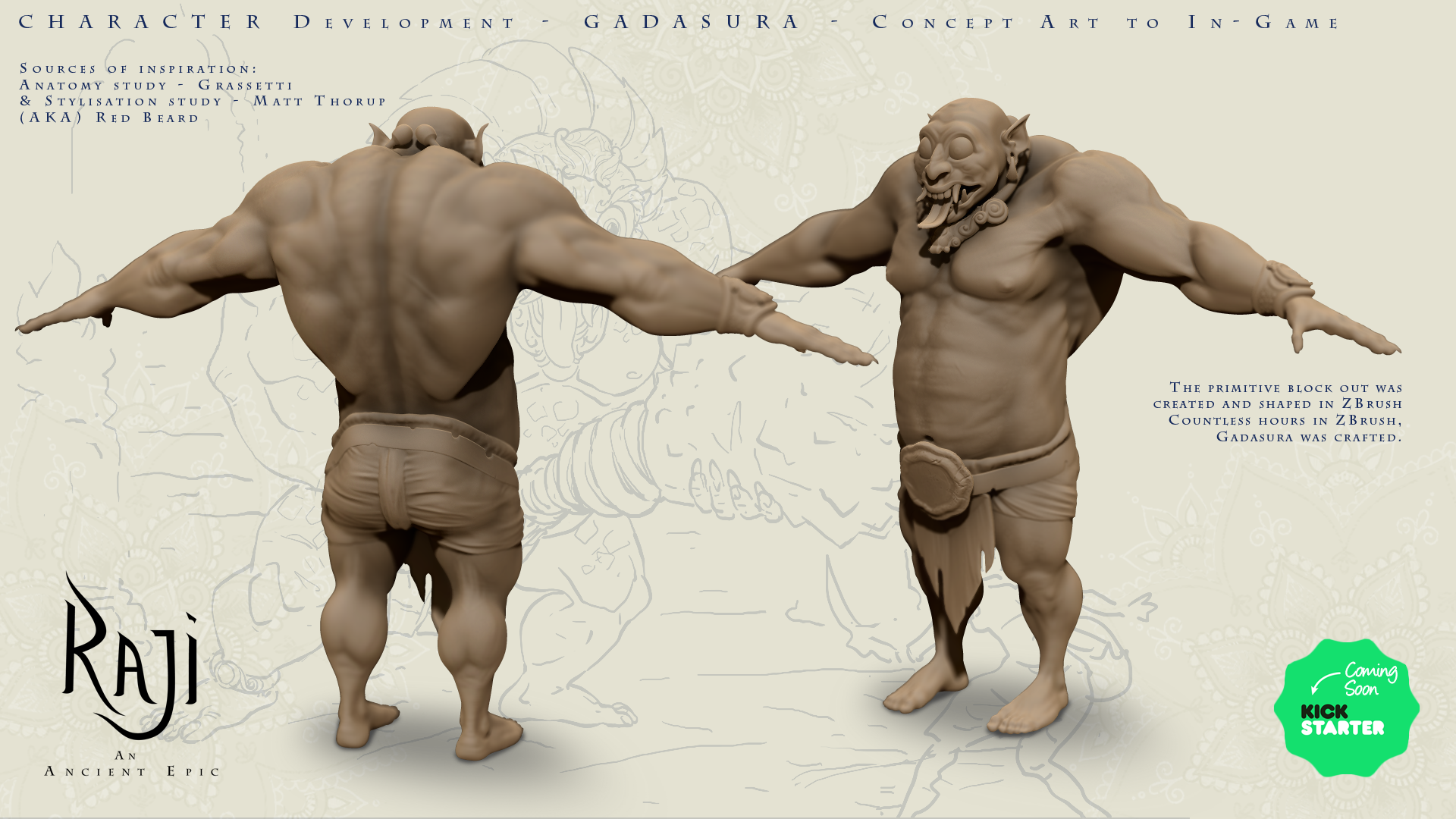 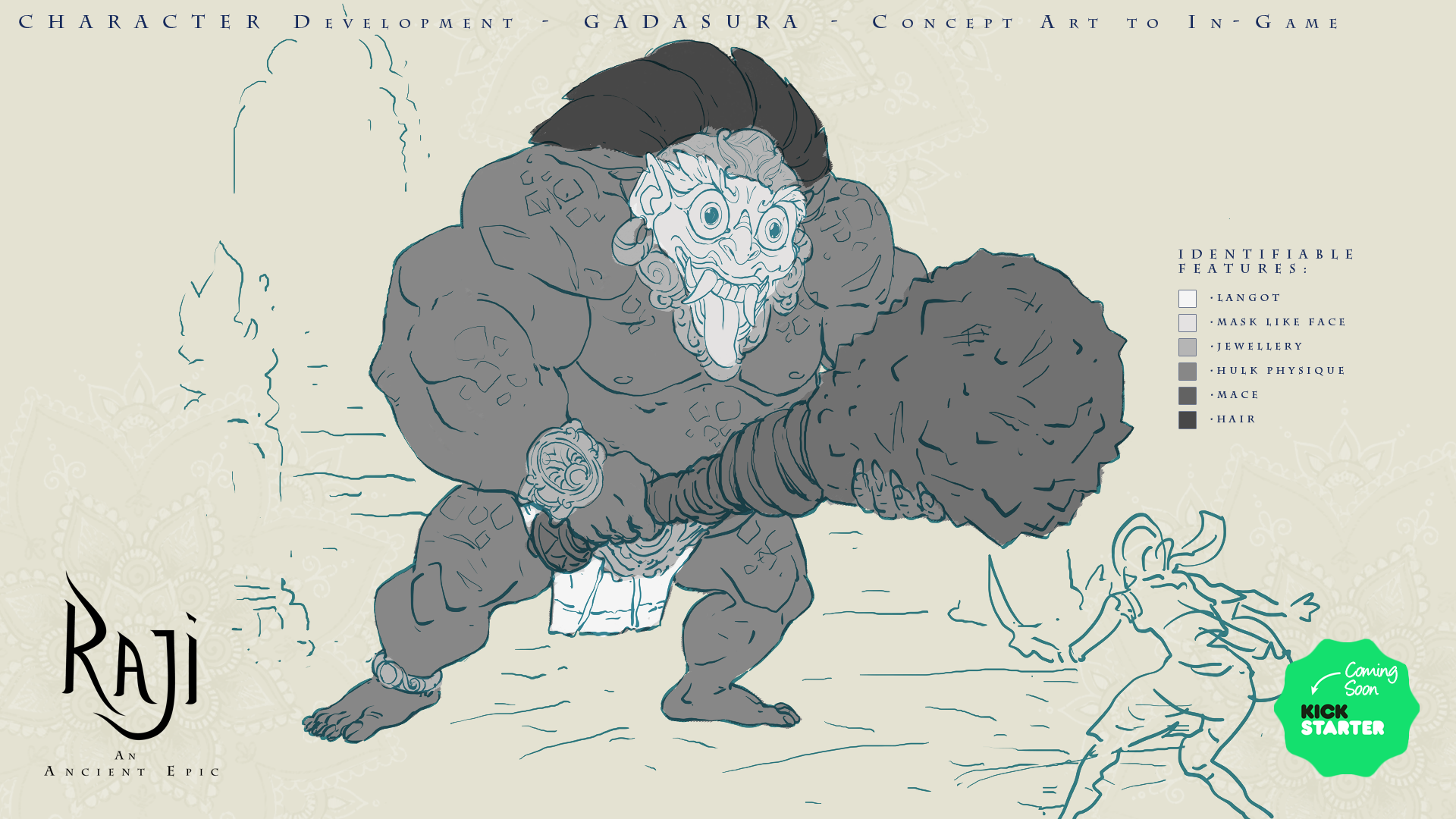 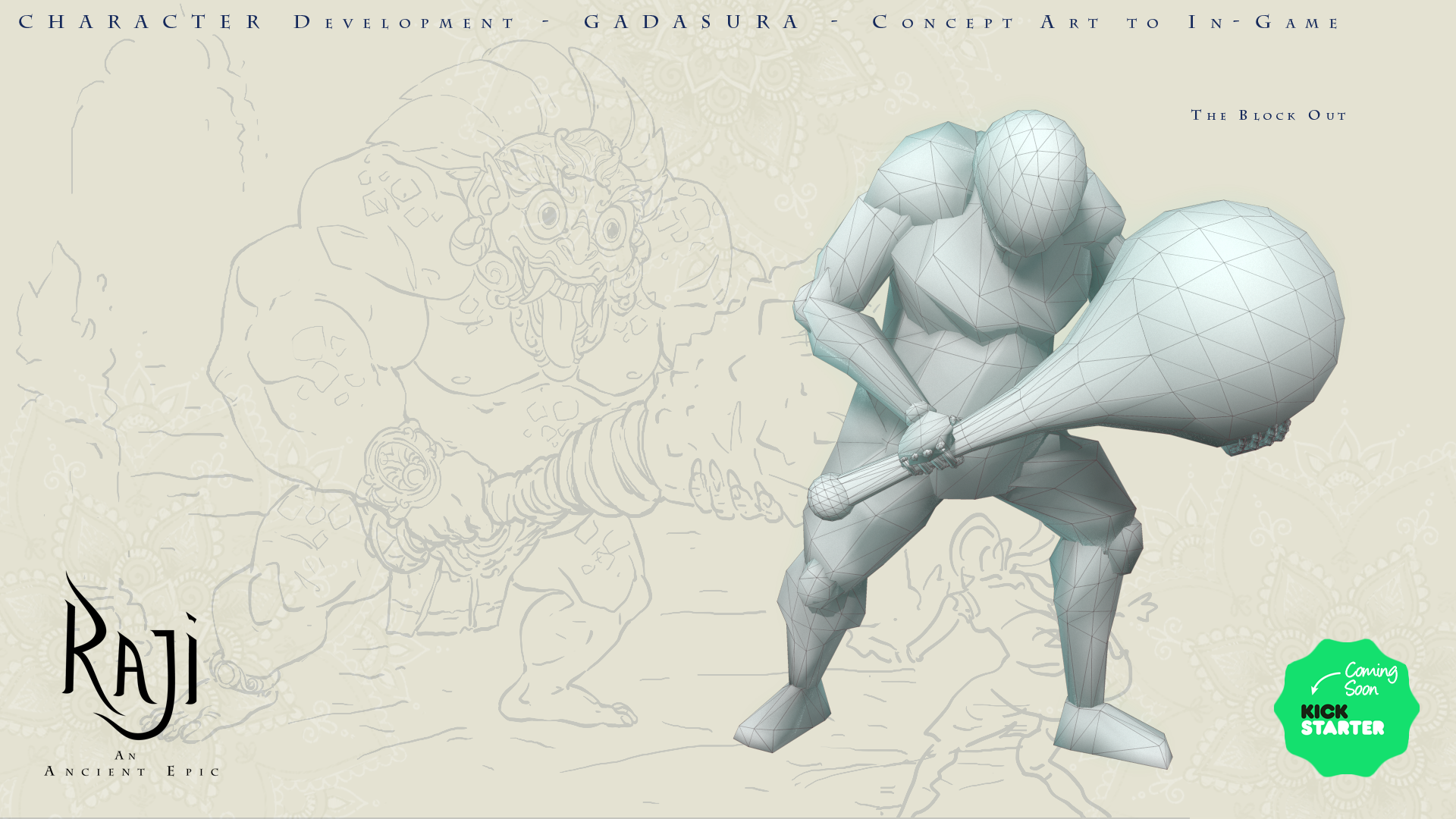 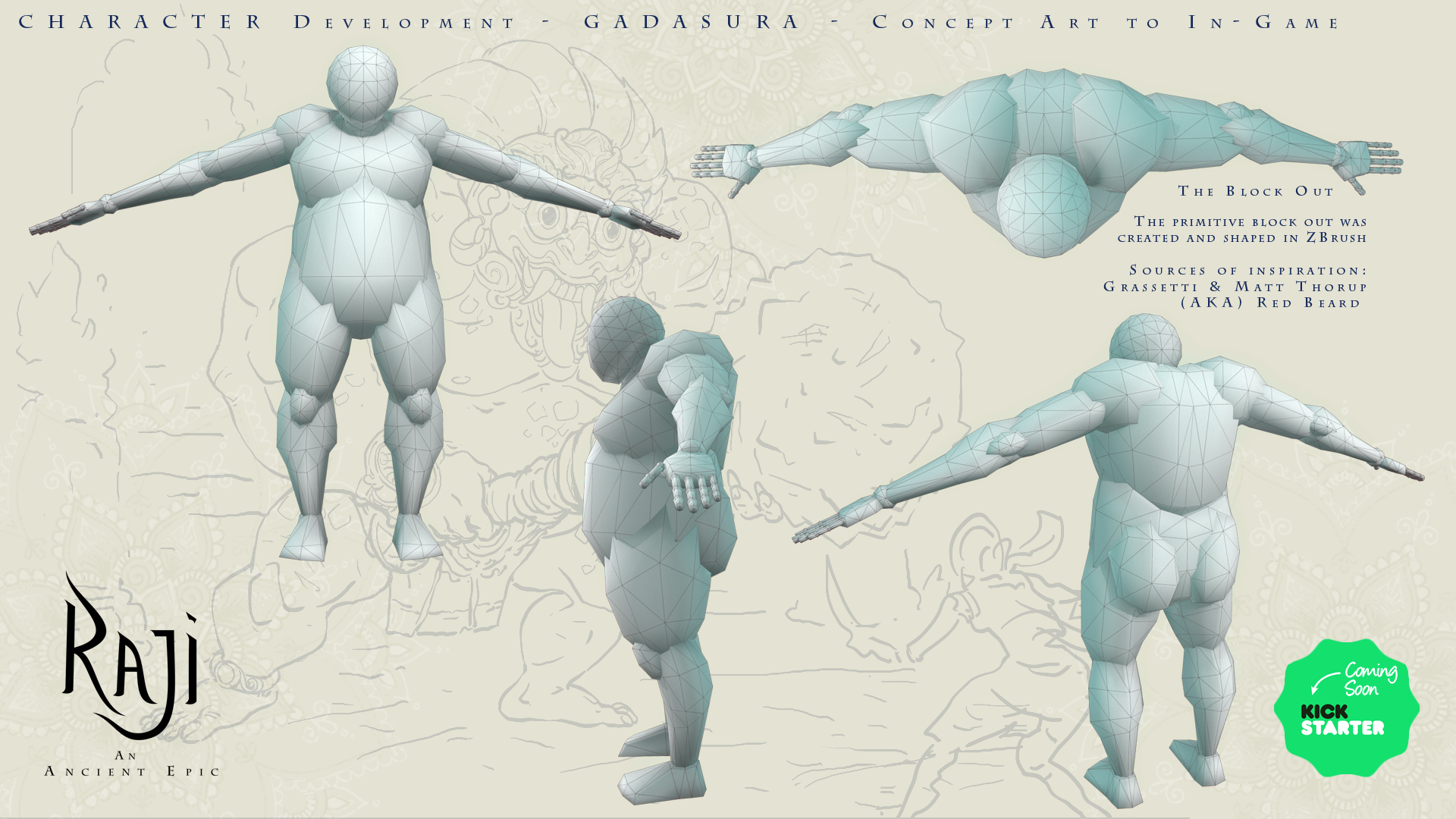 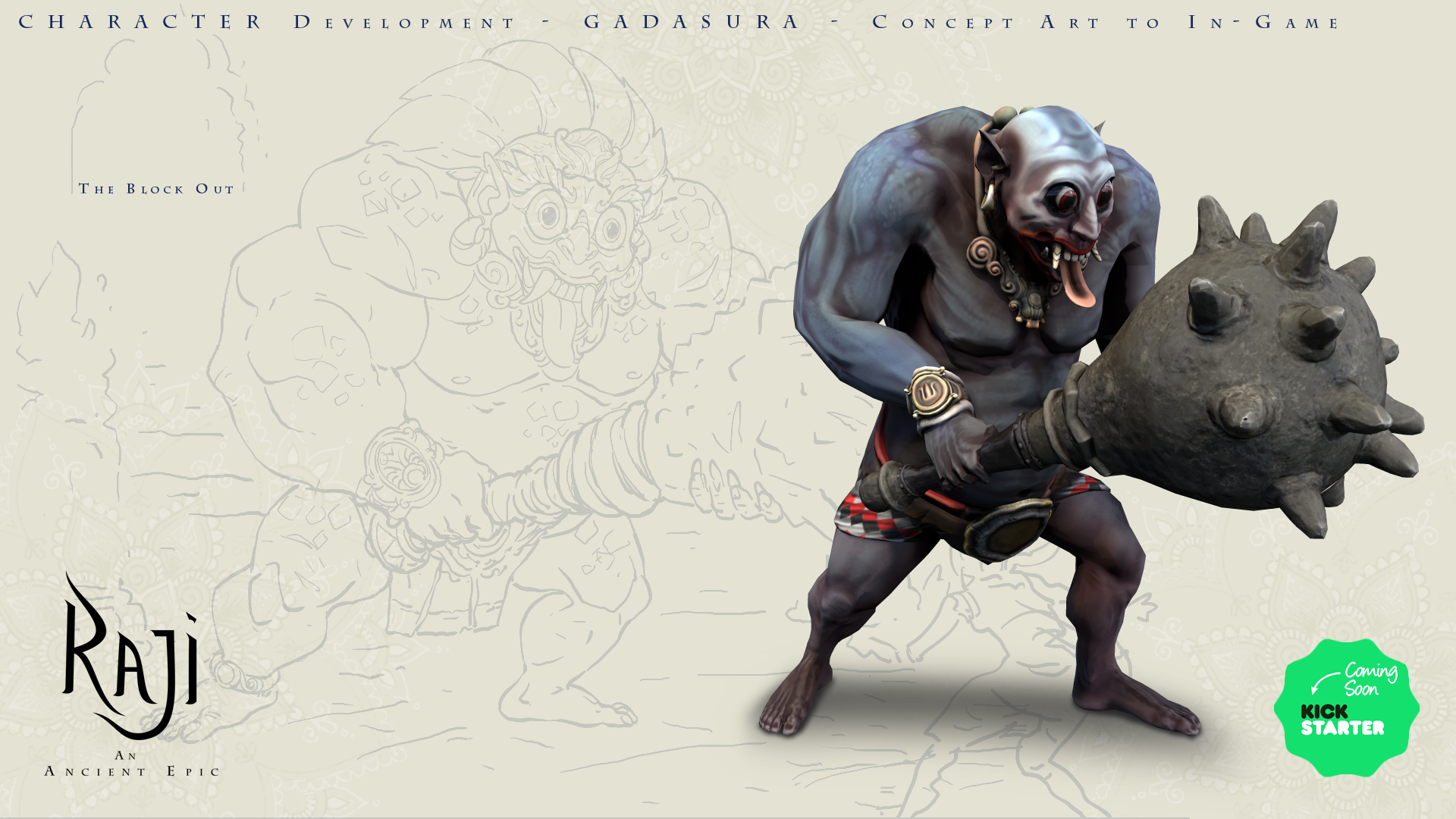 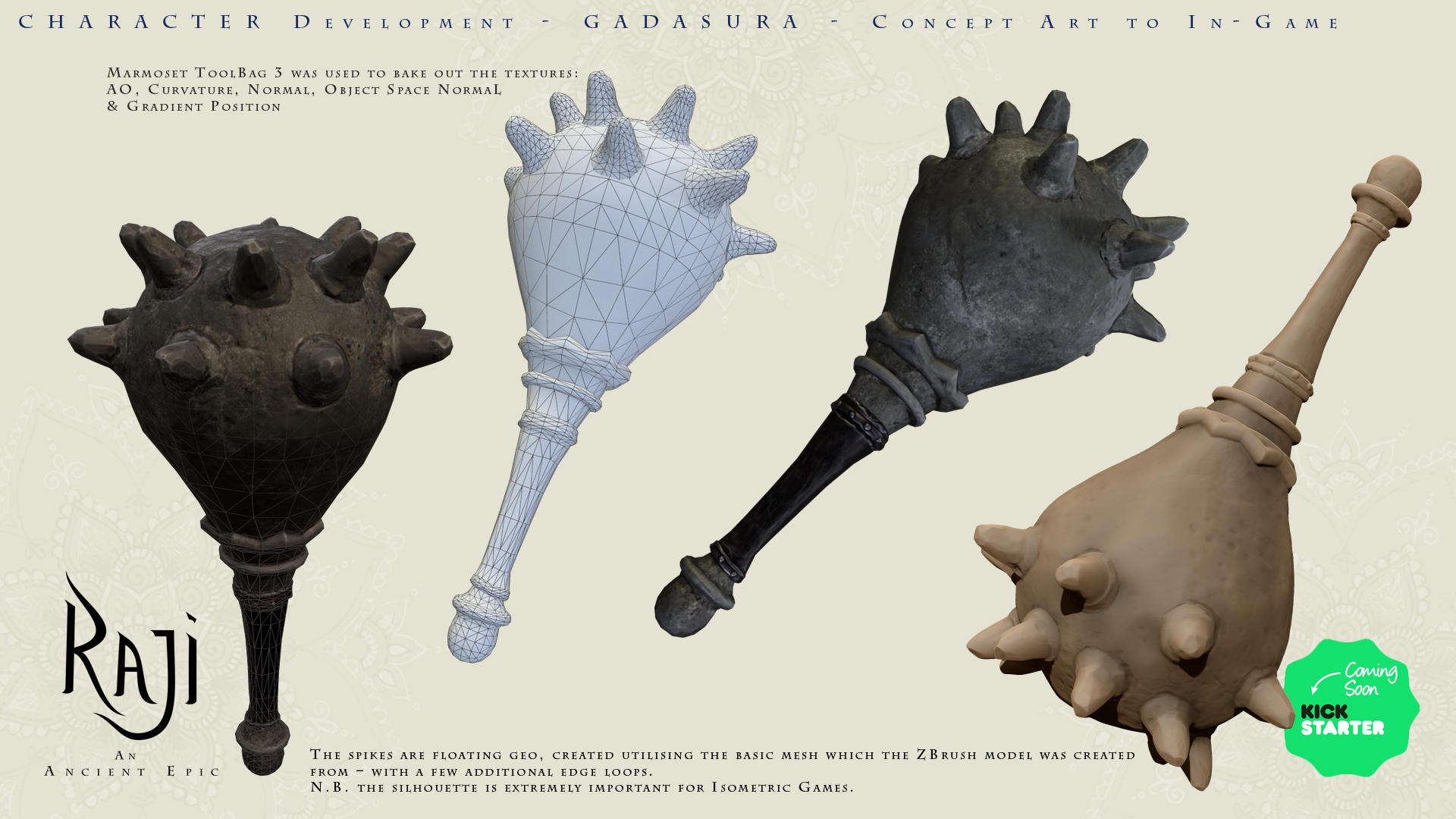 Just dropping in to tell you guys: This game looks amazing so far! Keep at it!

Just dropping in to tell you guys: This game looks amazing so far! Keep at it!

First sentence: “Raji: An Ancient Epic is an **isometric **action adventure game …]” But I did not see one single isometric shot

Really amazing atmosphere, it reminds me of Bastion. Keep going and keep us updated

Looks decent! And I see what you did wit the name =) Ancient EPIC :D:D:D

First sentence: “Raji: An Ancient Epic is an **isometric **action adventure game …]” But I did not see one single isometric shot

Really amazing atmosphere, it reminds me of Bastion. Keep going and keep us updated

Hey man, thanks a lot. I’ve mended it…as we are not pure isometric, that’s true. Thanks for the comment, it’s great to know that it reminded you of Bastion, one of the inspirations behind the game, cheers

Looks decent! And I see what you did wit the name =) Ancient EPIC :D:D:D

We played around with the new experimental Apex clothing tool in the recent Unreal engine release. After some issues with collision clipping, we ended up with a set of values which gave us this result. The simulation of her pony tail using physics asset took a while to be perfected. Share your thoughts