Drop the blueprint into your level and it will perform a trace creating a physics enabled rope bridge between itself and the trace hit.

This is free to use in your projects (commercially or otherwise), no need to credit me either. I only ask that you don’t re-sell this as is.

**To install: **
Download the compressed (.rar) project and unpack to a location of your choosing. Once unpacked run the .uproject file which contains an example map demonstrating usage.

To use in your own project, simply migrate the blueprint to the project of your choosing. (see documentation for details)

*Remember to subscribe to this thread if you wish to be notified when an update is available. 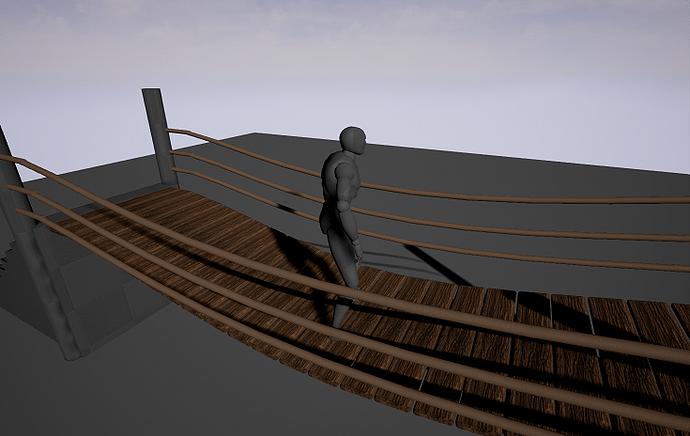 I’m going to check this out so fast, man. Thanks for sharing.

No problem, I just made this rather quickly this afternoon and plan on adding features…

Actually, here’s a list of the things I am planning:

If there is any feature you’d like to see implemented then please let me know.

Well, ropes and rails sound like a must, definitely. What about the width and breadth of the bridge? Could it be condensed into one solid mesh? What about optional destructibility? Just saying whatever comes into my head.

Should be really easy if you want to modify the existing cable component setup, but I think it may well require C++

Well, ropes and rails sound like a must, definitely. What about the width and breadth of the bridge? Could it be condensed into one solid mesh? What about optional destructibility? Just saying whatever comes into my head.

-Attempting rails now, but as ambershee has mentioned would probably require c++…currently there’s no way to dynamically attach it via blueprint so I’m experimenting with other options.
-The plank mesh is replaceable by the end user, so the width of the bridge is completely down to what mesh is used…I didn’t expose the mesh scale because scaled meshes suck.
-Destruction I can easily add, and will do so asap (thanks!!)
-One solid mesh?? I’m not sure what you mean here…It obviously needs multiple meshes otherwise there would be no movement…

Should be really easy if you want to modify the existing cable component setup, but I think it may well require C++

Yeah, I was hoping to keep it BP only…the cable actor really needs some BP love

If anyone would like to see a particular feature added then please let me know.

You’re welcome, be sure to check back soon as new features will be added regularly

Thanks ULLS! Very nice BP and thank you for providing it for free

Thanks ULLS! Very nice BP and thank you for providing it for free

You’re welcome Martin! Please let me know if you’d like to see any features added.

You’re welcome Martin! Please let me know if you’d like to see any features added.

I think I’ll wait to see what the update brings

Okay, good news!! I’ve managed to get guide rails and posts working by using the cable actor. I will spend some time refining this before I upload the update. 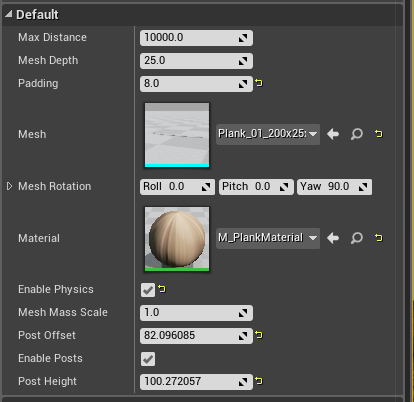 Wow, you work fast. This is really sweet.

I’ve added the ability to offset the posts Y axis to cater for different width slat/plank meshes, I’ve also exposed an X axis offset for the end stumps as they get generated at the hit location…this allows them to be moved back slightly to prevent them floating on the edge of a cliff. I have also now added a mass scale parameter so you can set how light/heavy the bridge is. For the ropes, I’ve so far exposed a parameter to set how tight/loose they are.

I’ll probably upload this to the site tomorrow evening after work as I’d like to comment the BP properly so everyone can easily follow what is going on in the blueprint and do a little cleanup. I also wan’t to get it all looking nicer too, currently the posts and cables have no materials.

Okay, I decided to upload it in its current state, it’s not too messy and is relatively easy to follow…I’ll work on cleaning and comments tomorrow.

Last night I tidied some things up and now got it to auto detect the mesh size which makes it zero hassle when using a custom mesh, with particular meshes this looks like a plausible rope too so I will probably use this method instead of the cable actor for the guide ropes as it can handle collisions.

I’ve also started working on an in game bridge building system, you place the bridge bp actor in the level and can call a ‘build’ event (via pop up menu perhaps) which will start building the bridge…the longer the gap is the longer it takes to build the bridge.