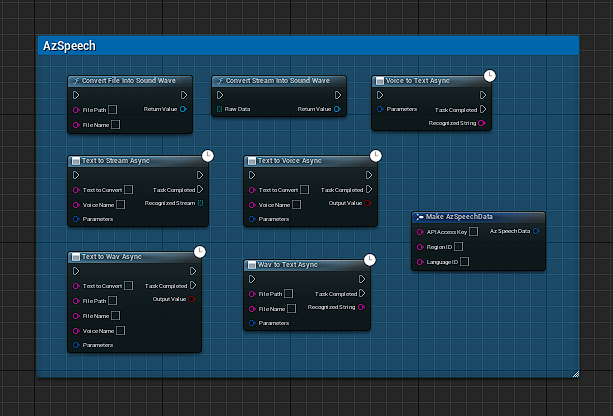 Created this plugin for a personal project and I’ve decided to share with the community for free. : )

A plugin integrating Azure Speech Cognitive Services to Unreal Engine with simple functions which can do these asynchronous tasks:

Any tutorial or even a detailed document on Speech to Text using this plugin is helpful and appreciated! Thanks for the contribution!

This new function is capable to save a text into a .wav audio file inside the specified location/path.

Look at the demo video:

Is there a possibility to play the audio async inside the game?
Also can we get sound wav file out from the node?

Are you using the function via blueprint or C++?
And check your API Access Key from your Azure portal: 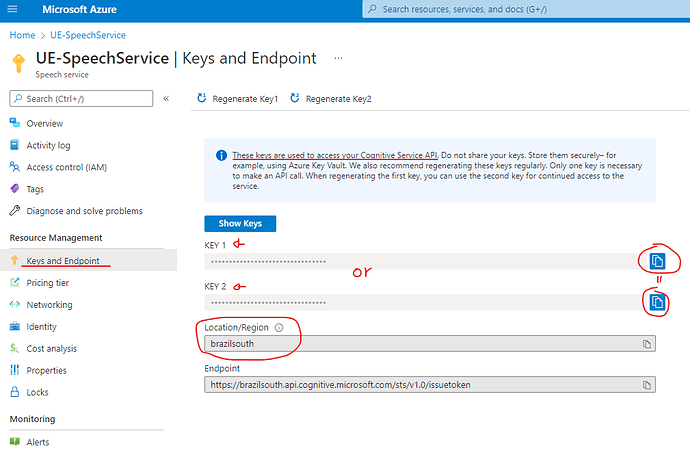 Hey! : )
Not with this plugin, but Unreal Engine provides some classes that allow you to get a file from your computer.

I created an example via C++ where I used a Sound Factory to create a USoundWave at runtime:

With this, you can load a file and play in a determined location on level, apply attenuation, etc, via your Audio Component/Sound Wave Component

The “AudioEditor” module only works in the Editor. : (

There is a plugin that does this job: gtreshchev/RuntimeAudioImporter: Runtime Audio Importer plugin for Unreal Engine. Importing audio of various formats at runtime. (github.com)

Released a fix to this:
Release AzSpeech v2.1.1 · lucoiso/UEAzSpeech (github.com)

This update will be on the Marketplace soon

Great plugin. Would be nice to have SSML supported and I am trying to figure out how to abort some sound. Can’t figure out the location of the ‘default audio component’ so far. Is it at the Game Instance? Or at the Level Blueprint? Or at the character that speaks audio?

This plugins uses the default output/input audio devices from Windows (OS) Settings, at this moment is not possible to change this with this plugin.

But with the Text-To-WAV file, you can save a speech into a .WAV file and stream it to a USoundWave to use inside a Audio Component. : )

Maybe this plugin could help you to stream a .WAV into a UAudioComponent/USoundWave: gtreshchev/RuntimeAudioImporter: Runtime Audio Importer plugin for Unreal Engine. Importing audio of various formats at runtime. (github.com) 4

That’s what I was afraid of indeed.

Maybe this plugin could help you to stream a .WAV into a UAudioComponent/USoundWave

Aah, that’s great indeed. I was already trying to figure out if there was a way to do that. Thanks for the link! 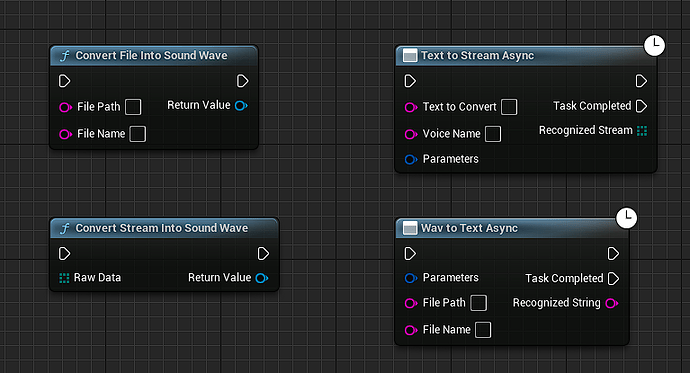 I’ve committed this update to a separate branch (upcoming-test) and will release it when I think it’s fully functional and bug free.

But if you want to test these features, feel free to use it and give me feedback! : )

Contribute to lucoiso/UEAzSpeech development by creating an account on GitHub.

Please note that these features are in testing, some things may change until the release date.

Does this technology work with voice commands? I want to use it like Siri: “Hey Unreal, set the weather to thunder and rain.”

Doesn’t support voice commands by itself but there’s some functions that convert your speech into a string (VoiceToTextAsync) and convert a string into speech (TextToVoiceAsync and the upcoming TextToStreamAsync) that you can use to to construct this logic.

For example: the VoiceToTextAsync returns a string of your recognized speech that you can use inside a comparing logic, etc. 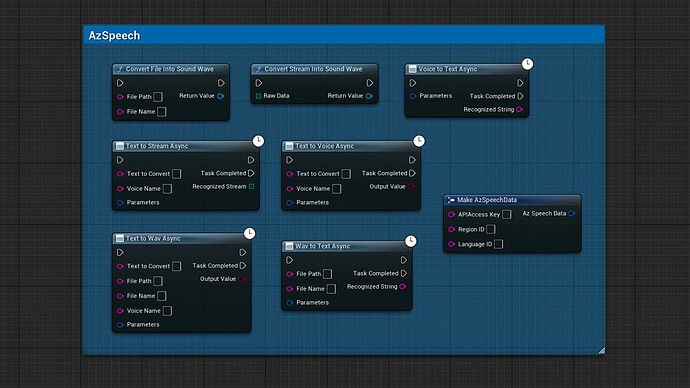 When the key M is pressed, Azure will listen to your default microphone (from Windows OS settings) and print the recognized speech as a string in your screen.