Hey everyone. I’m terribly stuck with a framerate of SEVEN FPS. Yesterday I was able to run the scene with 30-40 FPS.
I installed a marketplace options menu extension which has changed various rendering settings. I suspect that has something to do with what’s happend. Problem is: I can’t figure out what’s happening or how to undo it!

It seems as if the framerate is somehow locked or throttled:
look at the GPU stats, total is at 30 ms - though unit says 7.5 FPS and GPU needs 133 ms! 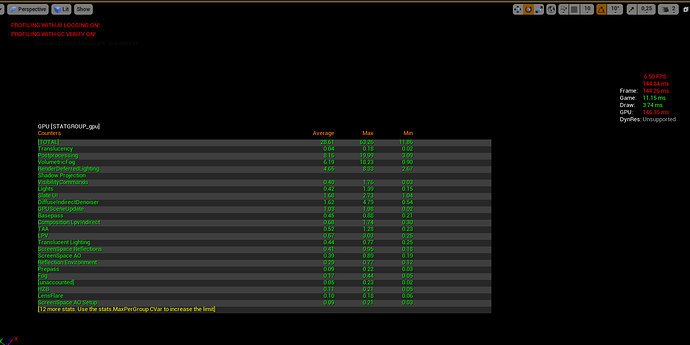 ProfileGPU says GPU calculations run only for a tenth of the time and then it’s idle.

What on earth is wrong here? Totally lost. What settings could cause this? Any idea? Thanks for any help.

Solution found when I began to try out weirder ideas, more due to frustration but with strategy.
Turns out that every new window (by that I mean not just content editor, but each single message in the message stack to bottom right) causes a significant performance drop.
One of the blueprints was non free of errors at runtime and caused some messages to pop up.
I ignored those as I knew it could not be the blueprint killing the performance. Well, it were the messages instead. With each closed message, the fps increased by 4-5!

I assume that these extra windows run separated from the GPU profiler within the large, seemingly empty gap.

So for anyone with super slow frame rate and noticable difference between shown fps + GPU visualizer: It COULD be the game thread blocking faster rendering as told at many other threads. But it COULD also be something outside of the main render loop. Make sure to close all open windows + dismiss all messages!