I released a FPS Game Starter Kit on the Marketplace
https://www.unrealengine.com/marketp…ps-starter-kit

Out of the box it has: 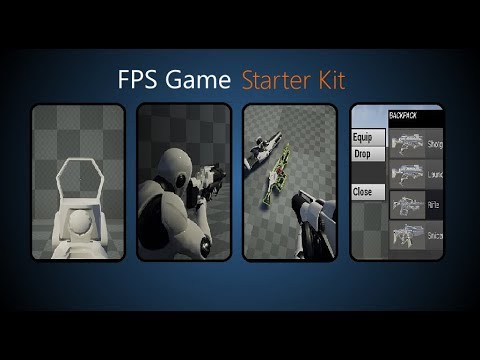 I do plan to update it and add new features whenever possible, you can check the trello page for more details if you like

If anyone has any questions, feel free to ask anything

Will there be a discord?

Will there be a discord?

Hi, there is a discord now too, feel free to join

Update 1.1 has been released! Here is the complete change log

-Additions-
-Vehicles (light versions of the default Epic Games examples, self-contained and not deeply integrated into any other Blueprint Actors, deleting the Vehicles folder would not break the template in any way)
-Vending Machine that uses the in-game currency to buy ammo and/or health
-Saving & Loading of the Player Inventory, ammo for weapons and collected money
-Money Pick-Up

-Character Base:
-Added in-game currency
-Added the ability to crouch
-Added delay between shots functionality
-Fixed an issue where Jump would play the sound each time it’s pressed
-Moved Pause to a Widget (to have a Save & Quit button)
-Minor tweaks regarding movement

-Weapon Base:
-Added an infinite ammo option
-Added a float for delay between shots
-Camera shake and gamepad vibration are now exposed to child classes
-Ammo mags are replaced with ammo in reserve (reload no longer wastes an entire magazine, but instead takes only the needed amount of ammo to fill the clip)
-Fix for a bug that caused projectile to go slightly to the left if the character was in TPS perspective and the projectile spawned from the gun barrel
-Option to disable left hand IK and an Enum for animation category have been added (in case someone has pre-made animations for everything)
-Shooting the enemy now spawns blood particles instead of the default impact particle
-Child classes now have examples of how to add firing and reloading animations for weapons

-PickUps:
-Changed the Ammo Pickup to work with the new ammo system

-HUD and other Widgets:
-Changed the ZOrder of Sniper scopes to be -15 and Hit Test Invisible, to prevent it from rendering above the VirtualJoysticks for mobile enabled projects
-Added a Widget for the Vending Machine
-Added a Main Menu for Saving/Loading
-Added a Widget to the Vehicles (to displays the controls on-screen while driving the vehicle)
-Added a Game Over widget for when the Player Character health reaches 0

-AI Example:
-Added the ability to move to a random location
-Added a function that makes it ragdoll when hit by a vehicle
-Added money to its PickUp drop chance
-Tweaked the collision and added a DetourCrowdAIController to it
-Red Barrel now has physics enabled by default

You should provide a link to this post on the marketplace.

I would recommend this for novice on up. I spent a lot of time working on my own system and I’m not that good with FPS. All I did was migrate the levels to this and it works better than my own. Too bad you didn’t put this out sooner. I used my own mesh for the TPS and for the FPS I used Ironbellys arms and weapons. I had no problems doing that.

I would recommend this for novice on up. I spent a lot of time working on my own system and I’m not that good with FPS. All I did was migrate the levels to this and it works better than my own. Too bad you didn’t put this out sooner. I used my own mesh for the TPS and for the FPS I used Ironbellys arms and weapons. I had no problems doing that.

I’m glad it helps you out with your project. Also, forum link has been added to the store page, thanks for the suggestion.

Are you planing on adding a new type of weapon inside like a knife or crowbar? Would be nice to see sharp and blunt weapons aswell.

Awesome, may look into buying this

You should add an area effect to projectiles. Your launcher only does damage on a direct hit.

Heys, for whatever reason I didn’t get any notifications that there were new replies…

@Rated87 melee attack will be in the next update, however melee weapons such as knifes, swords, spears, etc. are not planned.
@MrGibbs Thank you!

@Denmengel it’s on my list, but people have been asking for a pistol example more often, so that one has priority, but yeah both will be added.

Character:
-Melee attack ability
-TPS perspective now has better tweaked Yaw and Control Rotation depending if the Character has a Weapon or not
-Crouch is smooth now
-Toggle option for crouching
-Toggle option for sprinting
-The “Press E to Interact” prompt now doesn’t require the entire character to enter a volume

Other:
-Added Physics Surface Types
-Material is now being fetched too during the weapon drop process, making it possible to have different skins
-New particle effect for explosive barrel

Changed:
-Renamed vehicles from Buggy and Sedan to Heavy and Light vehicle
-Impact force for when a vehicle hits an enemy (Forward>ABS>200, instead of Forward>500)
-Re-worked the calculations regarding projectile spawns
-Save system now supports level (map) change with or without level streaming and/or world composition
-Slight alterations to the demo map, area where crouch is necessary to reach a pickup has been added

i am messing with save and load, can SB1985](Pulling data feeds into Unreal - Content Creation - Unreal Engine Forums) explane how i can save and load player transform position rotation

i am messing with save and load, can SB1985](Pulling data feeds into Unreal - Content Creation - Unreal Engine Forums) explane how i can save and load player transform position rotation

Hi, I made a tutorial for how to save new variables, the example I used was the player location. You can find the tutorial here.

The save system covers the player character, weapons inventory and stats. AI isn’t part of it, think of it like in Borderlands for example, when you Save & Quit, then re-load the level again, the enemies reset.

Integrating the enemies would make the Blueprints somewhat too messy to work with, would be easier to make a GameMode for that that keeps track of stuff and handles world related things.

It’s better to make a GameMode and a unique save file with enemy stats (struct array), then in the enemy on begin play read the data and set the values.