In my attempt to use UE4 for scientific data visualization, I did some research on the units used for magnitudes in Cascade particle systems. I deduced, if I am not wrong, that distances are measured in centimetres, speed in cm s-1, acceleration in cm s-2, mass in Kg and forces in Kdyn = Kg cm s-2. Remember that 100 Kdyn = 1 Newton.

In Cascade, loading a vector field and using it as forces (tightness = 0), with constant values of 100 Kdyn in the X axis, we observe precisely an acceleration of 24 cm s-2, hence deducing that in Cascade particles have a constant mass of 4.16 Kg, which by the way is quite an exotic value.

This has been achieved comparing the effect of the vector field with the movement of another emitter with a constant acceleration of 24 cm s-2, rendering exactly the same results.

What is confusing me is the distance covered by particles. Applying a constant acceleration of 24 cm s-2, in 6 seconds, a particle should run a distance of (a*t^2)/2 = 432 cm, but in Cascade I observe an exact run of 400 cm (see image attached). This is equivalent to an acceleration of 22.22 cm s-2.

Someone has an idea of the cause of such a difference?

Any help will be really welcome. 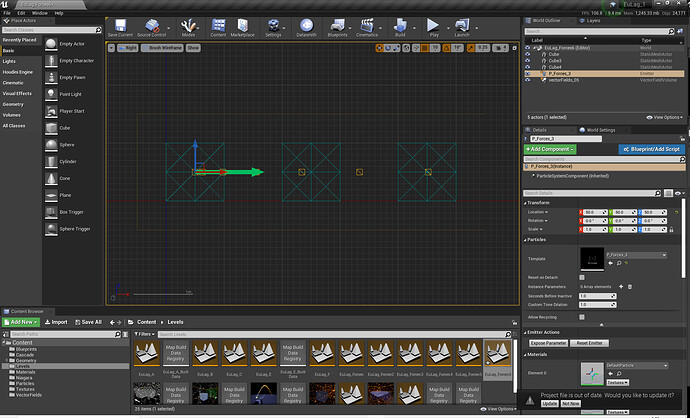