anyone knows how to fix this problem?

-all setting set to epic

-grass is from kite demo (ive changed no setings)

here are pictures with AA and without it 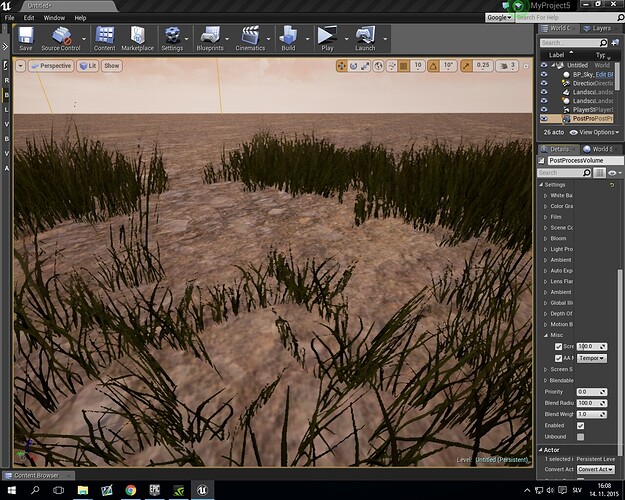 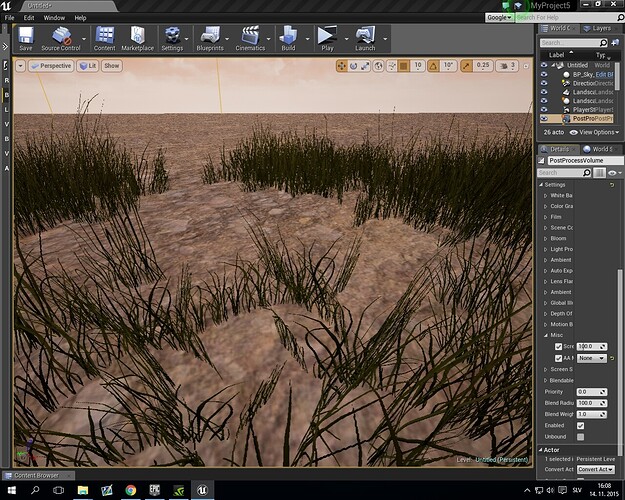 This is expected behavior due to the dithering calculations that Temporal AA uses.

So, what happens is the AA method you choose takes a sample from the current scene. Then that sample is calculated and redrawn on the screen a frame behind real time. With dynamic objects this creates a ghosting effect.

TemporalAA requires accurate per-pixel motion vectors. Because you are using WorldPositionOffset (or displacement) to animate, the motion vectors will not be accurate.

What you see is a limitation with AA and such will not be " fixed. " However, the development team is currently looking into options that will reduce how noticeable this effect will be. Thank you for reporting this issue to us. At this time I do not have an ETA for when these improvements will be made.

i appreciate your comment, sory if i sound unprofessional , but i made some googling on per-pixel motion vectors,

ive enabled accurate velocities from Vertex Deformation under the project settings, so i restarted the project to see the results,

do you by chance have any ideas on how to solve this?

I have a troubleshoot for this :

Please make a copy of your project before doing this troubleshoot.

If you delete your Intermediate, Saved, and Derived Data Cache directories from your project folder does this then load your project?

unfortunately it still stops at 45

also no worries about losing my project, because its new project made for testing

Interesting. So, am I correct in saying that in a blank project without Accurate Velocities from Vertex Deformation enabled you are able to launch the editor? If that is so I will attempt to test this on my end and determine if this is a bug.

UPDATE!
this one came unexpectedly!

i was just messing around with creating new project end ticking the setting
(i did that several times before also, no luck)
it was maybe 2-3 minutes into loading and BAM it opend!
somehow it got “stuck?” but it loaded till the end somehow…i dunno

I was able to enable Accurate Velocities in my project settings. From there I saved and restarted the Project. It took a little longer than I would expect I.E around 2 mins to open but I was able to open my project again. It did hang at precisely 45% until further calculations were made and the project open.

Would you link me a copy of your DxDiag?

These are the spec’s on my machine.

if you wish to take a further look of what happening, heres my dxdiag…

This page provides an overview of supported graphics drivers for Linux game developers.

The rest of your spec’s seem to do fine but I believe the issue you are having here, after going through the other troubleshoots, lies with your processor.

yeah maybe, but its kinda weird that CPU would do that…

is it maybe because its in editor not standalone game?

i dunno whats up with AA in engine tho…