To the devs: Will UE5 have floating pawn movement component replication properly implemented?
To the users: How many multiplayers game that use pawns instead/and character have you worked in? Do you think there are enough people and money involved to make Epic care about this component?

It’s a super basic component, so I’m not surprised it doesn’t replicate movement. All you have to do to replicate the movement is to set the location on the server (in UE4): 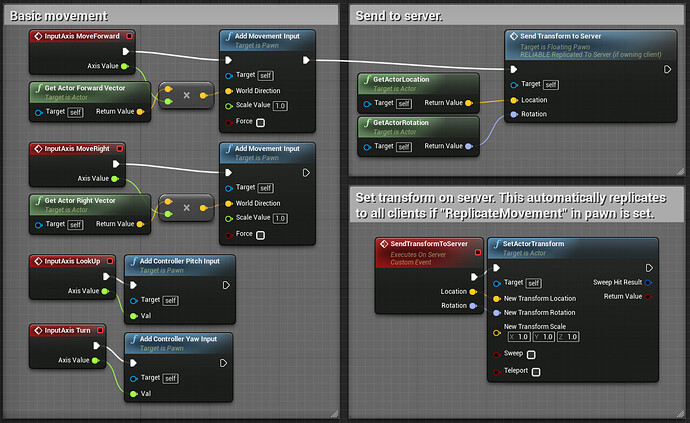 What would you say about the autority, physics and interpolation that are handled in the character movement component and not in your example?

Well, if you want all the stuff from the character movement component, just use a character; they are capable of flying as well. I have a character flying using the same stuff in the “Basic movement” box in my last post. If you don’t know how to set up flying characters, I can post the steps; it’s not that much.

It’s not that simple, the character movement component have many unnecesary thing that can not be removed, in the blueprint as well as in the code. Even if i workaround over the skeletal mesh and capsule component i would end with a network intensive “pawn”, and if you are thinking to tell me to remove the extra code they are 10k+ lines of code and i don’t have formal studies in CS. i apreciate you take the trouble to answer me but what some need it’s more complex than most can handle, i know the component will fall into oblivion but i wanted to know who else have similar problems.

Read this: Actor Replication | Unreal Engine Documentation. Things are only replicated when they change.

but i wanted to know who else have similar problems.

I think all those people just use the character class; that comes with all the other stuff you listed in your last post. I’m assuming you need a floating character like half life city scanners or halo monitors, and in that case, a character will do just fine. If you don’t need a skeletal mesh, just don’t use it (you can actually destroy it as shown below). My test uses the chair static mesh.

Also, if you still want to use the floating pawn movement, you can add interpolation & physics in blueprints yourself; I was going to add it in my example, but I thought that would’ve overcomplicated it.

you can add interpolation & physics in blueprints yourself; I was going to add it in my example, but I thought that would’ve overcomplicated it.

could you explain how to do this?