Hello.
there is a way to avoid fireflies in underexposed areas with path trace?
More the path trace cleans, more they appear.
I tried the Path tracing max path exposure, but it doesn’t work at all
I don’t want to use denoiser because it reduce too many details 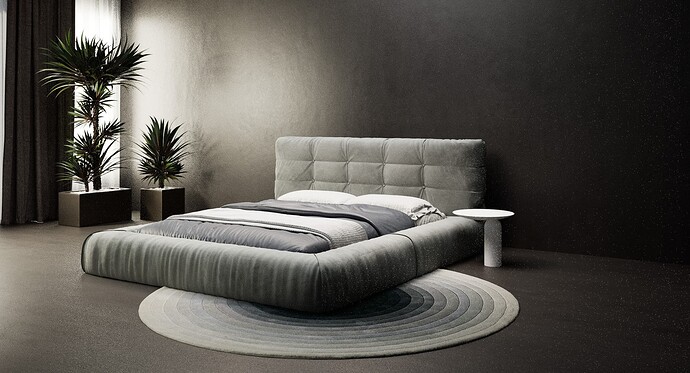 Yes. If you don’t want denoiser, you will need to increase the samples.

Hoy many samples are you using?

You could use that high number + denoiser, so it won’t need to denoise a lot, and it won’t loose that ‘high’ amount of details.

It depends, I use 4096 or more, usually. The point is that if I use denoiser it removes too much details. So using more samples should solve the problem, but also rendering time is important. I’m using unreal for speed, otherwise I would use 3ds max, c4d etc. So if I need to create very slow rendering just to remove firelfies sounds not the most efficient way to work…

Least of the engine problems… but a problem nonetheless.

If your final render is static I suggest making a manual merge in photoshop between the 2 different renders.

Even just setting the denoised image on top at a 50% transparency should look better and preserve enough details.

Short of that, I havent found much. The more rays you have the lesser your return on investment is.
There is a quality jump between the default settings and its double, but increasing past that gets less and less quality for rendering cost. To the point increasing does nothing.

Well, you can’t get all in life; you will need to do some sacrificies. For example, you can’t get a super clean 16k image with 10 samples in 5 seconds, because that technology doesn’t exists.

Unreal is fast when using it for real-time purposes with its real-time ‘engine’. If you choose to use the offline renderer, you are not anymore using real-time, so it’s an offline renderer like any other (but probably still faster). So, if you want something, it will have a cost:

If you have dark areas and want to get rid of the noise, I would go for 10k-15k samples. Or use a still high number (but lower) + denoiser.

Anyway, I have not faced that problem and it may not be a “noise” related issue, as I suggested with those solutions, but an additional challenge to be faced, which could be quite possible, as many other bugs and weird things that are being accumulated without the care of Epic.