We would like to focus some testing and development effort on our FBX importer, to help improve its usability and fix bugs. One thing that would really help us would be to share any problematic assets (source plus fbx) the community has on hand so we can test using them. If you have had trouble with our FBX importer and are willing to share your original assets (or simpler test assets demonstrating the same problems), here is what we would like you to do:

I’ve had several import issues with assets… can you please explain whats whats most importing when importing, is it the CPU or GPU? I would like to share my files also but can’t upload them to a public forum, im sure others have the same situation, can you provide a different solution?

I’ve had several import issues with assets… can you please explain whats whats most importing when importing, is it the CPU or GPU? I would like to share my files also but can’t upload them to a public forum, im sure others have the same situation, can you provide a different solution?

Hi there, if you are wanting to share a mesh, but don’t want to do that publicly, we have solutions for that. You will need to report the issue in the AnswerHub post linked in the thread, then our technicians can look into it.

Hi,
I had some issues with importing skeletal mesh characters that where not created as a singular mesh. In the case of these characters, they where made up of modular sections (i.e. body, pants, shirt etc.). I would see what looked like flickering materials on the characters. Interestingly enough, if you grouped all the parts together as a single skeletal mesh and imported them, everything worked fine. FYI.

Hi there,
I’ve been having a lot of importing issues recently… Although I’m not knew to 3D, I’m just getting to grips with UE, so perhaps it’s the method I’m using (I can hear the voices already – lol).

I’ve created a building in 3dsMax, it’s mainly one mesh with a multi-sub material, which has around 30 sub materials. There are about another 20 objects with it. I export them together as an FBX file.
When imported in UE, over 20,000 shaders are computed (!)… and the textures don’t appear even after that. :-/

Without naming names, this model works fine in another engine. Strait away… It would be great for me to be able to use this also in UE. Unfortunately I’d rather not share my model publically at the moment – so my apology if that makes this more difficult to answer.

When importing, I’m prompted to split the model up, which I guess will create less shaders. However I’m not sure how much splitting up needs to be done to come down from 20,000 to a reasonable number. Are there any suggestions before I report this as an issue to AnswerHub?
My mapping doesn’t always get imported correctly too. :-/
Cheers.

You did a great job. Thanks Stephen Ellis

Hey there! I’m struggling with the import of my static meshes into UE4. I’ve been trying and trying for the last 5 days and now I’m totally exhausted. The idea was, to import my meshes from blender into UE4 and use it as a renderer. But the lightmaps dont make any sense and i believe they aren’t the problem. I think it’s the exporting as fbx. I also tried obj and ascii fbx, and even imported end exported it from maya. I post the whole Blender project and a exported file! I’d really appreciate any kind of help!
PS: I know, the biggest part of the mesh isnt uv unwrapped, but please just focus on the wooden planks at the bottom. They have 2 sets of UV maps.

Hi @ll,
i am using (for example) the offered Addon from Lluis Garcia UE4 Tools Addon - Lluis Garcia and i get still bone mismatch error, with the newest stable Blender release.
In pose-mode the axis direction between mesh and bones is different, in Object mode not.
For some users the addon works like expected, but for a buddy and me, it stays the same old buggy way, even the addon-menue looks different a bit (missing 180 rotate function, while exporting).
It would be so nice to have a noobsafe exporter within Blender.
Ah before i forget: Ty Epic for your nice, freetime consuming monster editor.

Edit: Lluis Garcia helped me, to fix the problem(s).
If anyone encountering similar problems, look in his youtube comment section.
Best regards and yes if you install it correctly then its a noobfriendly tool.

One problem I have is the FBX isnt importing the textures that I integrate with the file from Maya. After about 30 times and watching 5 different videos on youtube I have just given up and imported the texture map but it inverts the UV map on the objects even though in Maya its completely fine coming from zbrush.

@Kash1 When you import your model, import your texture(s) manually.
Then doubleclick on your material for your mesh (UE generates one, while import) and drag the texture into a textureslot.
Then drag Material on mesh.
Sry i am beginner and using Blender, but i always make it that way.
What i really like, is that you get an extra slot for each Material, you had created in your modeling program.
Greetings 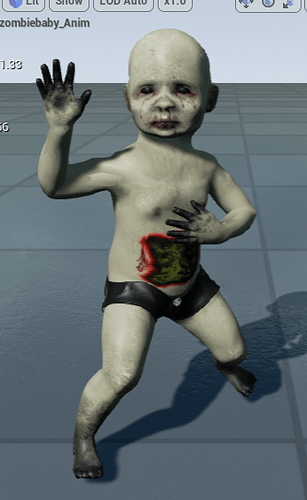 Good day, I’m not sure where to ask this question TBH. I am fairly new to unreal 4.
I had imported a mesh from another program. It went OK Except the box collider was ridiculously huge! When I had checked youtube for tutorials, they all were using an older version of UE 4 that had a dedicated collision menu. This menu is no longer available! Where did they put it??

I have assets from the Unity store that I imported into UE4…the FBX files are merged and the assets are all in one. I need them separated. How do I do this???
I asked on the Unity forum and was told to go away…politely, but still.

Hello guys, i got a FBX here that seems to crash the editor when trying to import it. This is a character modell we have been using in Unity and i’m unable to import it to Unreal4. The editor will show the “Importing” window up to 75% - then it keeps allocating memory which i can see in the task manager until it finally runs out of memory. UE4 crashes.

This is like my 3rd time asking this, why can’t I see my posts?

I am trying to import an FBX files made in Maya2016 and it crash UE Editor everytime. All objects are triangulated. I can share the file for you to see. How do I do that?

This is like my 3rd time asking this, why can’t I see my posts?

the first few posts(5, I think) new members make get moderated and have to be approved by a moderator, after that you can post freely:).

when I am close to it like this everything is fine. As soon as I move away from it, the whole thing starts flickering terribly, it kinda looks as if it was tearing itself apart continuously.

I tried to create a simple box, for testing import/export, in Blender (since I’m not forking out for Maya/Max at the moment for another system).
But when imported It errors out - saying there’s No Smoothing or Triangles found.
What is going wrong here?