Externally Referenced warning - what does it mean?

I am curious as to the cause of this error warning:

As of right now documentation is of no help:

Descriptions of errors generated during map builds or running a map check in Unreal Editor.

If someone has some idea how I can clear these out, please let me know.

Thanks, that was extremely odd.
Is it the space in “project 4.9.1” ? I renamed directory to project491 and everything resolved.

This seems to occur when opening a copy of your project in a new editor version since this changes the name of your project folder. Change the name back to the original folder name and the errors should be gone.

I agree, resetting “Project Folder name” to “Name of .uproject file” at once solved the issue.

JM_Lovermind, make sure the maps referenced in your project settings are not still pointing to 4.11.x location.

mxnko You are right, change [project_name 4.12] to [project_name 4.11] solves the problem… However, the procedure is different compared to older versions … where it was enough to change only the name of the folder, open the project, save & rename…
What is your solution?

For those, like myself, wondering what exactly is going on, I debugged through this. While there might be multiple scenarios that lead to this bug, I believe they are similar to the following:

Great!
Finally someone explaining the magic trick …
Thanks!

Hi StMalk your answer is right below from Directx77.
You just only change path in Engine.ini (“Core.System” section) 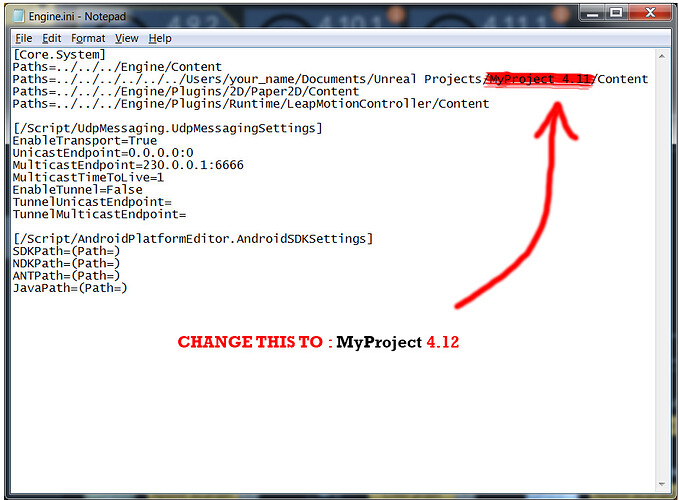 Thanks a lot guys…

Nice work of debugging, this helped me a lot, but you can also just delete the saved folder where this file is located. When starting your project, it gets generated again and any reference errors should be fixed

Thanks for info about Engine.ini, I’ve had this bug when I moved my game proj directory + deleted epic launcher completely(included everything in documents), all I had to do to fix this, is to remove Engine.ini from “Saved\Config\Windows”, then, editor will recreate this ini, with right paths when you start your project, now Engine.ini paths to my games dir is"%GAMEDIR%Content" and not “…/…/…/”.

Important note for anyone still experiencing this issue after trying all of the above: Try deleting your ‘Saved’ folder in your project files. This worked for me after the rename trick failed, likely because I copied my whole project from another computer, and then upgraded to a newer version.

Just putting this out there since whenever I googled the problem, this thread came up first.

Directx77 Thanks!!!
This has been bugging me for months!

Thanks, this was the solution.

For me in 4.18 this was the solution, but you can just delete Saved/Config, you don’t have to delete all of your Saved Folder

Thank you for posting this!