Hi there, I’m new to UE and I’m trying to follow this tuto (https://docs.unrealengine.com/latest/INT/Engine/UMG/QuickStart/1/index.html)

The problem is that I have to add my own C++ code, so I started a C++ proyect, First Person Shooter template and Starter Content enabled. When I try to edit FirstPersonCharacter blueprint, EventGraph seems to be empty (no nodes), but Character can still jump, move and everything it’s supposed to do… So where is that code? I’m pretty confused because if I create same project but Blueprint specification instead C++, the Graph Editor contains every node that it should have (run, jump, shot, etc.). I have tried to compile it too, but compilation went ok and nothing happens 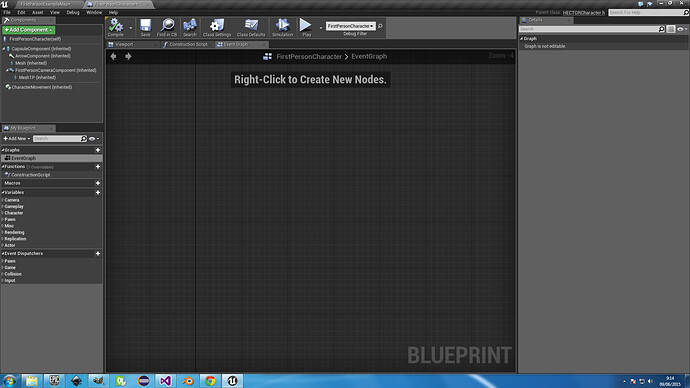 NOTE: I also have checked “Show inherited variables”, but I can’t find similar option at Graph Editor in case missing code is placed in its parent.

Does anybody figures out what’s going on?
Thank you so much in advance and best regards,
maije.

If I go to “Add new → Add Feature or Content Pack → Blueprint Feature → First Person → Add to Project”, it adds a new “folder” named FirstPersonBP, with the same subfolders that FirstPerson, but if I get into Blueprints, double-click at FirstPersonCharacter, it contains the complete Event Graph 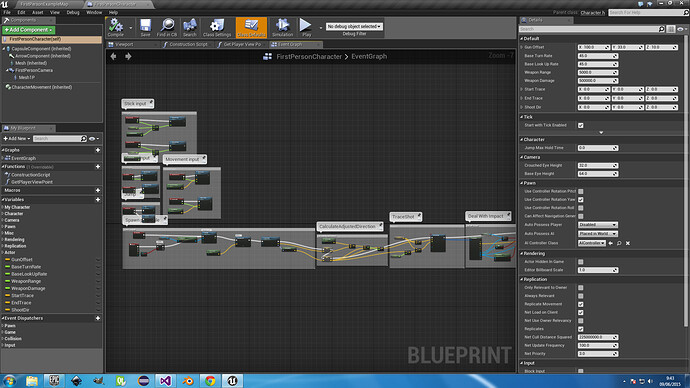 Thank you Omnicypher for your answer

I had checked source files and found it out already, but I don’t know how to see that code into nodes editor to handle it from there. I’ve compiled such code inside Visual Studio, but it’s still not showing at editor window (maybe wrong compiler configuratation?)

BTW, nice to know I can add C++ code into every kind or project, no matter which template I use.

Any tip or guessing is welcomed

blueprints are an alternative to C++ classes. they do the same thing. you can mix them, but anything done in c++ will not need to be done in blueprint, because its logic is already taken care of behind the scenes. to do something in blueprint that is written in C++, you just call a c++ function.

every time you are using one of those blue nodes in your event graph, you are calling C++ functions from blueprint. when you use an AddMovementInput node inside your character blueprint, that is calling a function in your Pawn.cpp named AddMovementInput(), which calls another function AddInputVector() inside PawnMovementComponent.CPP, which messes with the movement components velocity. but you don’t see any of that from blueprint, you just call the function, and it does stuff behind the scenes.

Thank you so much Omnicypher,

I’ll try to create a proper pipeline to work with.
Best regards,
maije