Hello.
I have an issue with my EQS query which doesn’t get utilized properly, the scenario is as follows;

I created an AI that is able to eat other Dead AIs when his health is lower than 50 percent ( basically when they Die In their death-handler function I set a gameplay tag for the one who dies as a food source ) and then within my EQS which searches for actor class of type “AI” I use a “Gameplay tag test” to distinguish between dead AIs who have food source tag and alive ones and then I use a " Distance to the querier" to find the closest dead AI, next In the behavior tree after setting this EQS I use a “Move to” task to go to that nearest dead AI.
Problems are these; 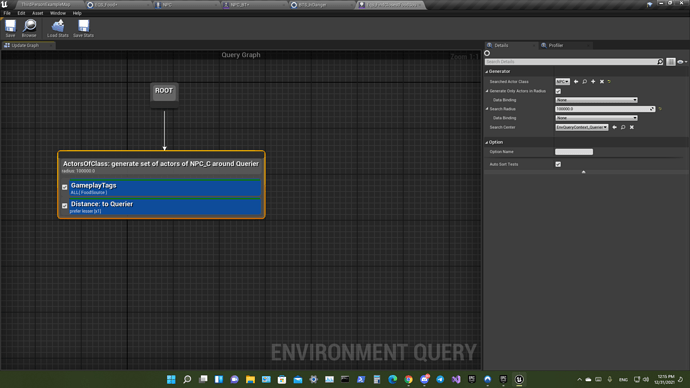 From your image, I don’t see an “is dead” Gameplay tag, so the AI will look for anything that’s food, whether it’s alive or dead.