I’m just a bit curious why my custom generator do not appear on the list in the query graph.
Is there any pre-requisite in order for them to appear. 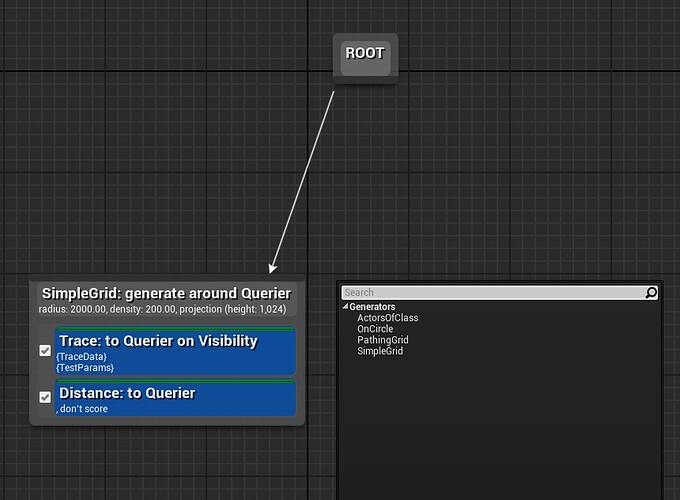 Apparently it doesn’t appear on my list of generator. Any idea?

I remember there being a bug that new generators do not show up in the list until the editor is restarted. Can you check if that’s the case?

restarted it… still not there.

The problem seems to stem from the name of the blueprint. “NewBlueprint” will not show up for me either in 4.6.1. I did test this in our main internal build and can see that it will pick up that name now. Can you confirm that this is what you are experiencing Frozenfire? 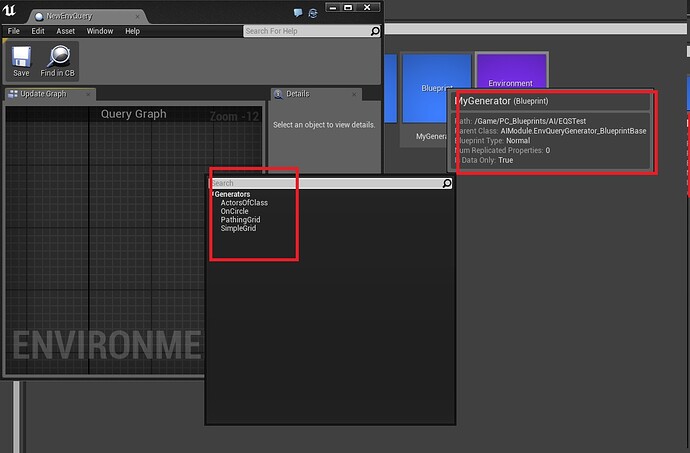 Okay I tried again by remaking both the query and generator…for some reason it appeared BUT… HOWEVER Upon further trying to re-replicate the issue. now it doesn’t appear again.

Will update if there’s further result.

Thanks for posting that, it lead me to the root cause. After making the “NewBlueprint” I then deleted it and tried making another generator, which suddenly would not appear in the search.

When the “NewBlueprint” was created it left some sort of corrupted asset behind. Even after deleting the NewBlueprint generator, it kept it in the folder and that somehow tricked the EQS’ search function.

Right-click on the folder that holds your generators and select “Show In Explorer” then delete the NewBlueprint.uasset. Once I deleted that on my machine, I could see “MyGenerator” again.

I have entered a bug report for it and a crash I found that is related: UE-9636

Let me know if anything else is behaving unexpectedly with EQS. Thanks!

I meet the same problem on the 4.6.1, I guess it appear after a crash and was due to a corrupted element.

I seek deeper in the code why my new generator based on EnvQueryGenerator_BlueprintBase does not appear in the list: For a reason I don’t understand the Generator was not in the UClass iterator list in GatherEQSGenerators. (I test the name of all the iterator to find mine).

To fix I delete all files in DerivedDataCache and Saved folder. I delete too the CachedAssetRegistry.bin file in Intermediate folder. And it works again.

Note: As the GatherEQSGenerators use a static cached array, if a new generator is created, it cant appear in the list which is already filled.