Hi,
Is there a way of customizing where an EQS trace starts from? I am using PathingGrid EQS node with Trace test.

I want to trace from an enemies gun to the player (not directly from the Querier/ Enemy) as there is a width offset from the gun to the enemies root.

You should be able to define this via the EQS context. Make a new EQSContext blueprint, do a function override on the context and you can choose whatever you like as the context.

Ok, I have provided it with the querior location vector as the gun’s front socket (it is getting the sockets location fine) via the overridden ‘Set Locations Set’ function inside a custom context and I am using this for the Trace source.

Is there a way of visualising the EQS line trace from the gun so I can see if the trace is starting from the correct place and updating correctly?

Will the trace start point update when the enemy rotates to face the player (using Focus)? (The gun is attached to the enemy via socket)

Sort of, once you have your eqs running in game you can enable the gameplay debugger (’ key) and enable eqs debugging (num 4 i think), it will give you the full eqs line trace result, which wont look like a standard trace, but should prove the result

Thanks for your time, the eqs line trace seems to be following the AI perception trace (i.e. the trace originates from the character and not the gun) and is not going from the enemy gun barrel to the player despite providing the correct actor set. (I also tired using the gun’s barrel socket for the Providing a location set with the same outcome). 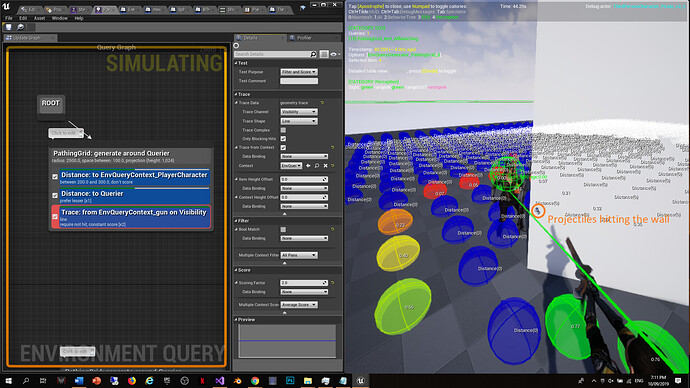 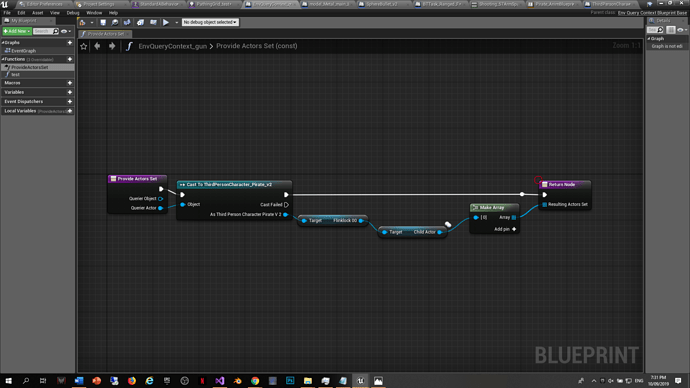 I ‘believe’ I fixed the issue. Thanks for the help Daniel.

→ It’s seems one cannot have a custom start point for the trace (when you feed it a context, it is always querier to context or reverse). This means one cannot get it to start from a child actor (the ai’s gun) as it would go from the querier (the AI) to/from its gun, which is of no use.

Alternatives would be to:

The above seemingly removed the issue I was having with the projectile.

I also added 2 traces to ensure the Query and Move to node only ran when they needed to: