In October of 2014 I created my Randomized Dungeon System. After release it turned out to be flawed with bugs. Recently I discovered the level instance feature of UE4 and decided to try it again from scratch. I came up with a new generator which still uses tiles compared to other generators which are only able to use walls and floors on a fixed grid. Since I’ve gained a lot of experience in the meantime, this new version should be much cleaner, more stable and more professional. It is still made completely with blueprints.

You can use it in commercial and non-commercial projects and are not required to give credit to me.

[HR][/HR]
The generator works in two phases: layouting and spawning. First the layout is set up by spawning DungeonTile actors in the level and connecting them. Afterwards the DungeonTile actors spawn their assigned levels before getting destroyed as they are only placeholders.

There are three examples included in the project. The first one is a dungeon made of hallways. It shows that there can be multiple types of connections (“narrow” and “wide” in this case) and that actors placed inside level tiles and navigation works fine. 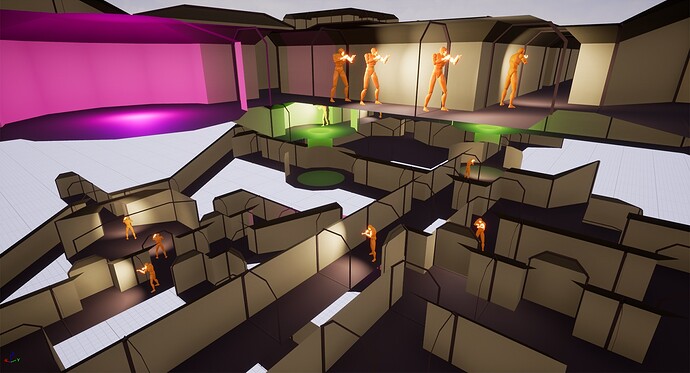 The second example consists of hexagonal tiles as you see them in many strategy games. They use the connections “G” and “W” (Ground and Water) at the edges to generate natural looking landmasses (compared to tiles which are either completely ground or water). It’s also best for showing the difference between the “From Center”-mode turned on and off. When turned on, the generator will add the next tile to the one that is closest to the level’s origin, leaving no gaps in this example. 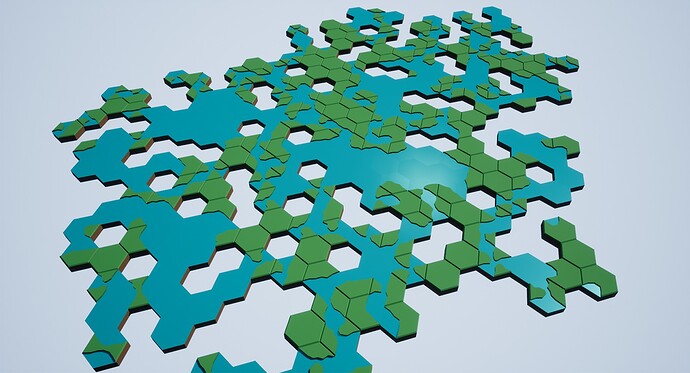 The third example has a train track raging in all directions with twists and turns. The fact that connections can be rotated and therefore generate twisted layouts is what this example is supposed to display. 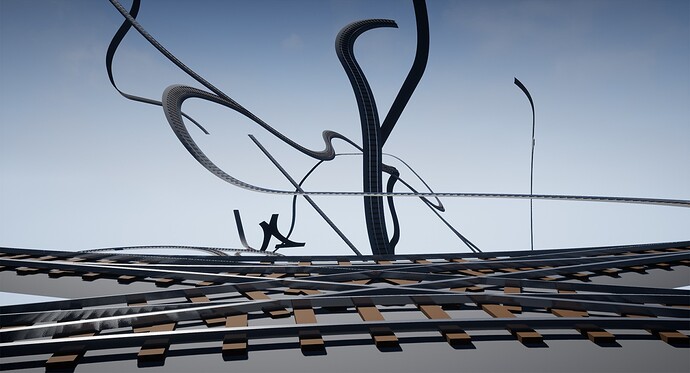 At this point I have no video detailing the exact procedure of using this generator, but here’s a quick rundown:

If you did everything correctly, a dungeon/level should be generated. If not, read the tooltips of each property, study the examples and ask questions in this thread. I’ll try to create a video later but that might take a few weeks as my job is demanding and I only have the energy to work on something during weekends.

Hi @DasMatze!
I justed spent the last 2 days examinating all the options for maze/dungeon generation!
Your implementation seems to be the best choice for my needs!

Do you what modifications would have to be done to get a seed generation? Are you currently implementing this option?
If not, could you point me toward the good direction in order to do it. I would gladly share it if I succeed of course!

Once I have some fancy screenshot, i will post the result I achieved using your system.

In a newer version I successfully implemented seeds. I planned to release it as soon as I found a way to eliminate the need of copying and pasting settings.

Thanks to 4.20, there is an option to fill data tables with blueprints from an CSV string. The problem is the data contains rotation values which need to be entered in another format (quaternion) and I have no idea how to convert pitch, yaw and roll to x,y,z and w.

Ok, that’s great news! I will try and implement the random seed, but I’m really looking forward to your new version!
Here is what I got from just one day messing around with the system:

I still don’t know how to put some rules to prevent too many rooms to be spawned in the same area or too many paths but I will search more; I really like the fact that the connection points can be anywhere in the sublevels; You can have dungeon going up and down one several floors.

I will try and implement the random seed, but I’m really looking forward to your new version!

I don’t think I will work on my version anytime soon.

I really like the fact that the connection points can be anywhere in the sublevels; You can have dungeon going up and down one several floors.

Not just that, they can also be at any angle! The rigidity is what bugged me most about other generators.

That’s what the tile condition and layout modifier actor classes are for. Let’s say you wanted to prevent straight corridors from spawning directly next to each other like in this area:

First you create a child class of the “tile condition” class and assign it to your “straight” tile in the settings of the dungeon tile helper. Inside the new sub class, you set up some box collision components to the left and the right of the straight corridor which overlap WorldStatic objects:

Override the “Check Condition” function of the parent class and set it up like this:

This function checks each box for overlapping tiles and returns false once any of those tiles is a straight corridor, otherwise it will return true.

This Tile Condition actor will get spawned during the layout generation process. Once a tile has passed the collision check, the tile condition is placed with the same transforms as the tile itself and the Check Condition function determines whether the tile will be kept or whether another one will be tried.

Once the generator is done with placing new tiles, Layout Modifier actors will be spawned at each tile (if any are assigned) and their “Modify Layout” function will be executed. They can be used the same way as tile conditions, like checking whether an X-crossing has a dead end on one of it’s connection points so it can destroy the dead end and turn the X-crossing into a T-crossing. Or a Straight corridor if there are two dead ends opposite of each other.

Afterwards the Layout Modifier actors will be deleted and the levels assigned to the classes will be spawned in the world.

I hope this little example made clear how the layout can be influenced during and after generating a dungeon. Let me know, if you need any more help.

Also, I kept this article in my reading list: Removing&nbsp;Quaternions from 3D Engines
They seem to explain quaternion in a new way that make them really to understand.

I don’t think I will work on my version anytime soon.

Hey, I love this generator and I love that you made it free, however, I’m having trouble with generation and I’m not sure what to do. The level generates and maybe 1/4 of it is normal but the rest is all overlapping. The lighting is also weird (my lights only effect the ceiling). I was wondering what I was doing wrong. I can post screenshots if you want.

Yes, a screenshot would be helpful.

I actually made a video because I think it shows it off better. Correct generation is shown 20 seconds in. https://www.youtube.com/watch?v=PLdIv81lht0

Thanks for the video. You set up the collision meshes correctly, right? Could it be your dead-end tiles which reach into other tiles? They are not tested for collisions. They should either be a flat wall or reaching forward into the hallway.

The dead ends are flat walls. It’s still not working. How are you supposed to create the collision? I have basic block versions of each of my corridors that are the same dimensions.

I’ve also noticed that the majority of the overlapping tiles are corners, t-crossings, and x-crossings.

I looked at your project and see that your collision meshes use the “Use complex collision as simple” setting. This cannot be used since the generator uses these models to detect overlapping tiles. To do that, the collision meshes need to consist of convex primitives which means you need to use the “Default” setting and add collision primitives.

There are multiple ways to add collisions: https://docs.unrealengine.com/en-US/…ttingCollision

The best way to add collisions are custom collisions: https://docs.unrealengine.com/en-US/…shes#collision

Make sure the collisions do not reach to the edge of the tile otherwise a tiny bit might overlap with the neighbor tile and will be rejected.

Was there ever a video created for this I am having a hard time figuring out how to make this work correctly.

Adding a start room is easy, as you need to place at least one tile in the main map. The generator itself doesn’t act like a starting point. The start room should have probability set to 0 to not be spawned anymore.

For the end room, create a child class of the TileCondition class and overwrite the “Check Condition” function. Add this to check whether the end room and dungeon generator (which you can place at the start room) are at least 5000 units apart (so it won’t spawn right next to the start):

Other unique rooms should also have a limited amount. To check whether all necessary rooms have been spawned, you can create a child class of the LayoutModifier blueprint and overwrite the “Modify Layout” function. In there you can fetch all DungeonTile actors, go through them and look for the necessary rooms. If they are not available, call the “Restart” event in the DungeonGenerator.

There is no way implemented to check whether one connection is connected with another connection, so checking whether a keycard can be obtained before facing the door to use this keycard on, needs to be done using your own blueprints.

Hi DasMatze, first of all - thank you very much for the script! With the help of your script, I want to generate a residential building. And I have a question - it is possible to make the transitions not Narrow + Narrow and Wide + Wide, but a Special transition in which you could choose which types of transitions can be contacted. Sorry for my English. I think it will be clearer in the picture.

Are we allowed to use this in projects we plan to sell?