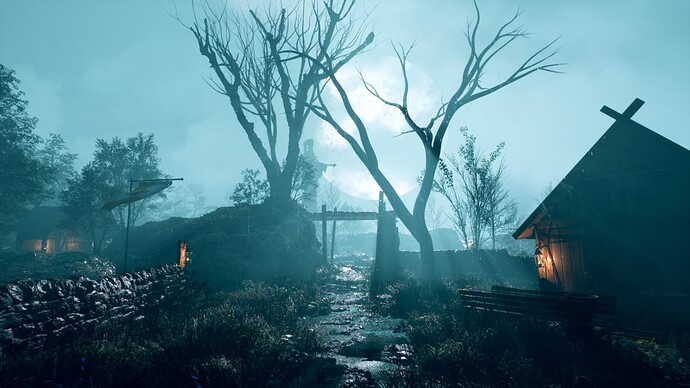 I’d always loved the environments in Dragon Age: Inquisition, so I thought I give it a go to create some cinematics from the concept art and level screenshots of the original game – this time with the full power of Unreal Engine 5! AKA, my "Thedas Magic Mystery World Tour’.

I’ve done two-ish at the moment, and I plan to work my way through every level in the game at least once - time permitting of course. 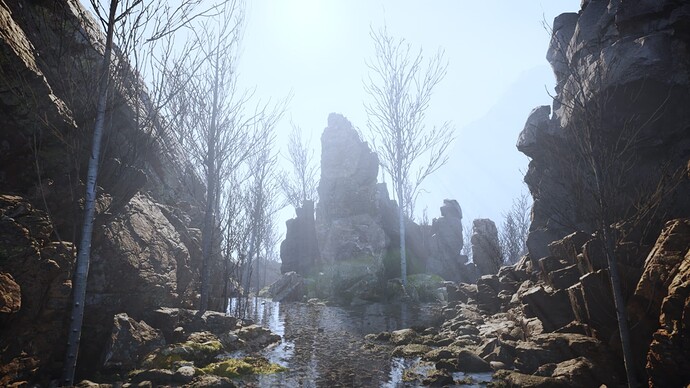 In full fairness, Dragon Age: Inquisition came out in 2014, so obviously the technology for video game real-time graphics has developed substantially since then – and not to mention that it used an entirely different game engine (Frostbite 3). With that said, obviously the lighting, models etc… aren’t going to match up 100%, and with Nanite and Lumen – the whole look of the original scene isn’t exactly the same – but it wasn’t supposed to be. The aim for this little project was just to re-imagine what DA:I could have looked like with today’s graphical capabilities – to capture the mood and the essence of Bioware’s environment level design.

While this series is in part just for fun in my spare time (and maybe a little DA4 hype), it’s also in many ways a technical demo for the early access of Unreal Engine 5. As such, some of the limitations of Nanite and Lumen are highlighted here – for example Lumen’s current lack of support for translucent materials. Note how the foliage (especially the grass!) can tend to flicker when moving and generally kind of looks odd.

Another unforeseen thing (although not necessarily in a bad way) is how Lumen changes the way you go about lighting scenes. Something you may notice is that the original Frostbite 3 screenshots seem quite a bit darker – whereas even with a similar lighting setup, the Lumen scene is much brighter. Improved global illumination means … improved global illumination. Huh. If you’re used to UE4, it can be a bit of an odd thing at first – having all your scenes be brighter and better lit than normal - even when you’re not necessarily trying to make it so. More realistic, certainly – but different. For the more technical side of things, most of these scenes were kitbashed together using full quality Nanite Quixel Megascans assets – with the exception of some of the trees and roots (done in Blender Sapling Gen), the basalt columns, the animated water and the mountains in the background. Nanite is great – this level of complexity would never have been possible in UE4 – although as a caveat, at nearly 1GB per model – this scene is HUGE. If this any indication (along with the offical demo) future games done in UE5 are certainly going to be hard on the SSDs.

This scene was 100% dynamic – no light bakes. Just Lumen working its magic. But given that these scenes were running at full quality on the cinematic preset at around 25-30fps on a single 1060 Max-Q, 6GB VRAM – I’m not even too mad. It’s not like I’m running a 3090 here.

The final export was done using the Movie Render Queue – at 2K resolution with temporal sampling bumped up to 32 to get a nice smooth image. So in this regard, it’s not truly ‘real-time’ – as it took around 3 hours to export out the whole sequence – I guess ‘real-time-adjacent’? As a 3D artist mostly using Unreal for animations and client work - I don’t mind - but with a bit (read: any) optimization, that FPS could definitely be bought up to something more reasonable. Final colour grading was done in Davinci Resolve 17.

This looks fantastic, DA3 gameplay was a low point in the series for me personally but the environments were amazing, I’m sad we couldn’t explore the DA world more.

Thanks! Yeah I still remember screenshoting everything through my first few playthoughs just for the environment art - felt like a tourist lol 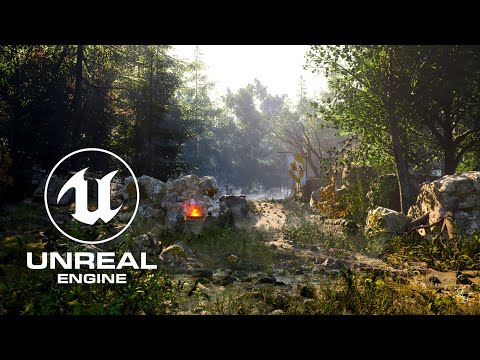 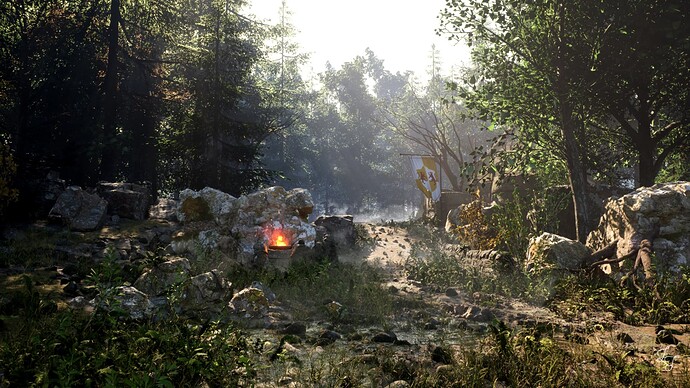 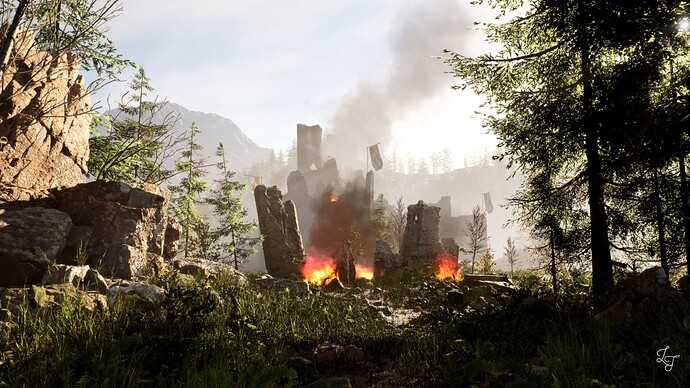 And so here we have the third and final part of the Hinterlands I’ll be doing for this series – as anyone who’s ever played DAI will know – at some point you must ‘Get thee out of the Hinterlands’ – seriously, the game is huge – it’s not an all-Hinterlands-all-the-time fest. 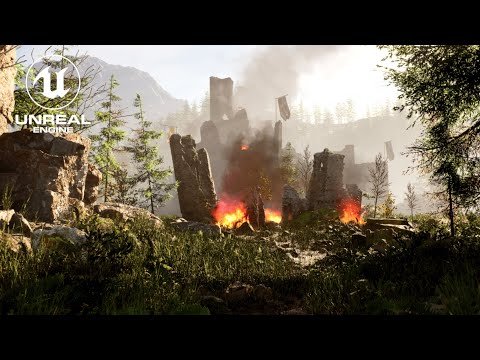 Onto other parts of the scene: particle systems ahoy! The fire and the smoke are still Cascade I’m afraid – still getting around to mastering Niagara – but they seem to still work OK – shockingly efficient by the way – I kind of expected all of these particle systems to tank my FPS, but no – Unreal was chugging along fine.

Playing with the atmospherics here – dust, soot and ash would realistically be flooding the air around this place, so it affects the volumetric lighting of the scene, turning more red and brown – but I didn’t want to make everything grey and dark either – so sort of a compromise here – still that bright morning light, but overall … grittier as if … well, everything was on fire. Which it is. 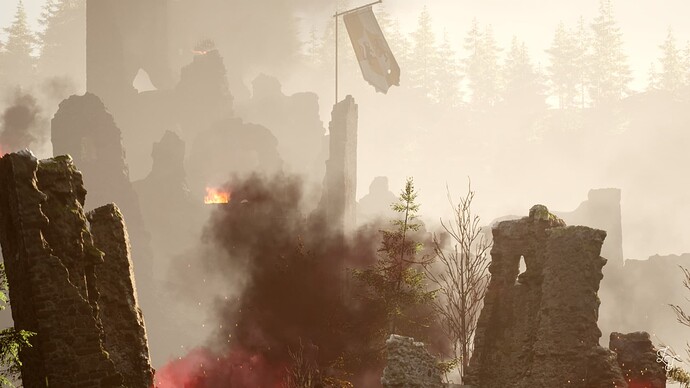 Looks fabulous, really good job, makes me want to head back in and play again!

Today we go further afield: Emprise du Lion! Home of ice, snow and more red lyrium than you can shake a stick at! There’s a brittle beauty to this map and I loved playing through it - the three dragons in a row in the end – a bit less so – but nonetheless, a gorgeous environment and one of my favourites from the game. This part in particular is in the frozen Elfsblood River – near the first camp and to the right. 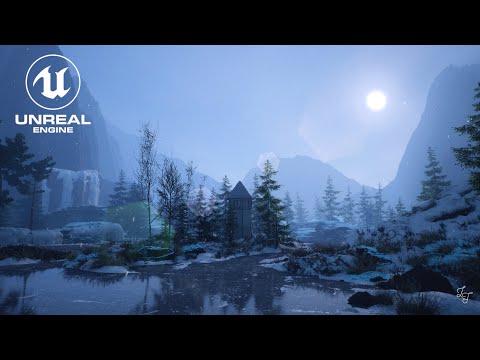 Tower was modelled and (very quickly) textured in Blender, as were the mountains and some of the trees and rocks. Quixel Megasans assets were used for some of the more high-poly meshes in the foreground - all Nanite of course. In this one, I’m actually not using any reflection capture actors – 100% lumen scene here – including the reflections. There’s still some issues – with reflection pop-ins and some occasional wobbly-ness – but overall, pretty decent results…

Also dipping my toes into Niagara for the falling snow particle system – and gotta say, I’m impressed. It’s much more user-friendly than Cascade and very flexible – not to mention quick to get a good result. 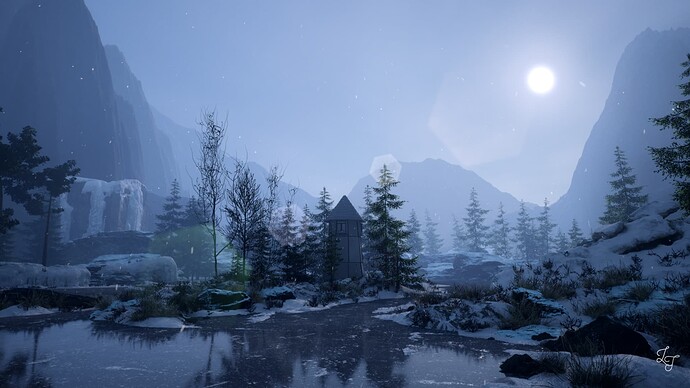 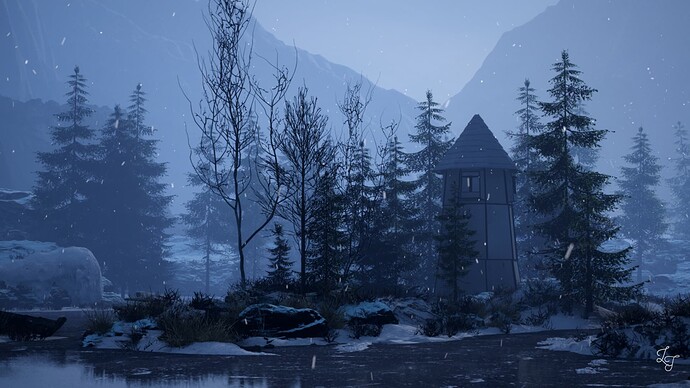 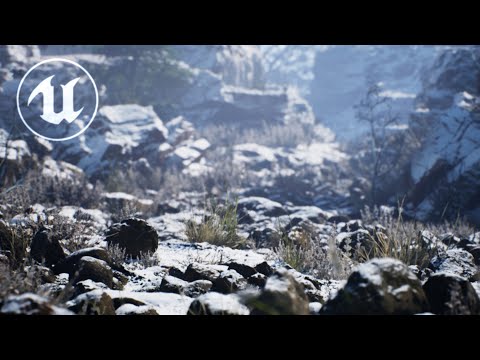 Here we have Emprise du Lion Pt.2! This is on the mountain path leading up to the third camp on the map. Also, trying out a more cinematic framing with the black bars. Not sure if it completely works – any thoughts? 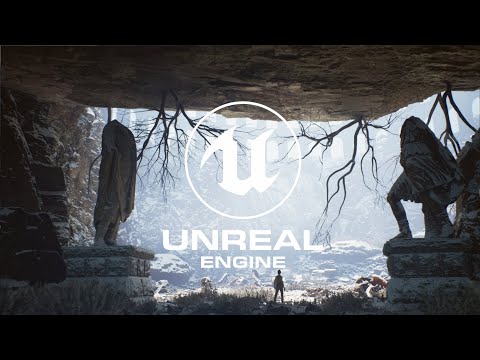 I’ve been getting a lot of comments and DMs about doing tutorials. This is … not … that. Good tutorials are hard, OK? And I wouldn’t feel super comfortable trying to teach people when I’m still learning and getting a grip of UE5 myself … So. How about a speed-build of a scene set to some relaxing airport jazz instead?

This scene in particular is one of the dragon-infested-colosseums in Emprise du Lion – specifically the last one: ‘Leontine’s Ring’. Some artistic license was also taken to give it an increased sense of grandeur and scale – also to give Lumen a bit more to play with in terms of atmosphere.

This is sped up of course – in non-flashtime, this took just over one hour to put together. Although, it should be said that this is specifically only the environmental build itself – there’s a lot of the process that this doesn’t show – mostly because I forgot to record it and also because building material shaders and UV unwrapping models for two hours just isn’t that interesting. Although maybe you’re into that – I dunno. I don’t judge. Point is – there was a lot of legwork before even beginning a scene like this.

This scene is mostly kitbashed from Quixel Megascans and Epic Marketplace content – although there’s a sprinkling of my own personal modelling and a smattering of re-textured free models that I’ve come across online.

I’ve left this mostly un-edited – so you’re going to see plenty of mistakes and some questionable design and layout decisions every now and then – because that’s the reality of it – no matter how good you are – mistakes happen. I like that saying: ‘Make your mistakes early and quickly’. But also don’t be afraid to try things out. Hey – maybe it’ll actually work! Granted – this scene is designed for a very specific purpose – a cinematic – so it’s more akin to a movie set than a proper game level – the workflow for the latter would be much less … chaotic. But then again – that’s part of it – you have to know your output and not waste time getting bogged down in details that no-one’s ever going to see. 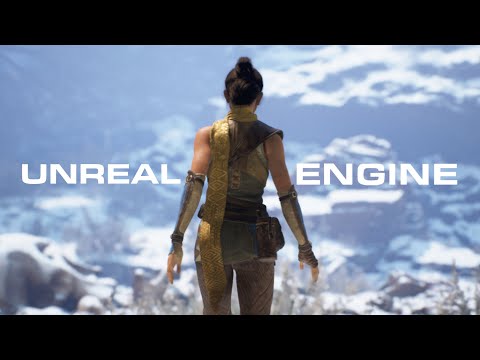 Continuing on – here’s Leontine’s Ring in Emprise du Lion – also featuring Windwalker Echo taking a little walking tour of the Dragon Age universe (fortunately without having to fight a dragon). It’s interesting to be able to play with scale much more effectively when you have a human character for reference.

Granted, I actually had a lot of trouble migrating the base Echo asset into my project – a lot of the blueprints broke and I had to manually diagnose the problems and at times, re-construct sections of her animation blueprints and materials. Which was a pain – but anyway… Hopefully the kinks get ironed out down the line. Anyone else having trouble with this asset? 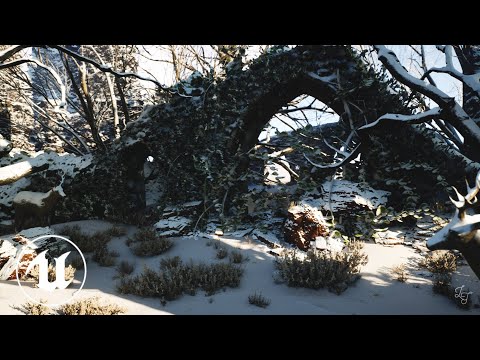 I actually wasn’t going to do another Emprise du Lion scene, but then I remembered this one part of the Suledin Keep that always looked really interesting, with all the gnarled, snow laden trees – and I kind of got carried away. So, yeah. Another one. Still not a tutorial though.

Most of these assets were free photoscanned models from Sketchfab that I re-textured and touched up in Blender. The usual mix of Quixel Megascans thrown in for fun – and also because I had the snowy models already textured up.The whole scene took just under thirty minutes to set up – not counting asset optimisation and texturing time.

Love the time lapses, probably my favourite thing to watch when I’m working in Unreal

Continuing this series! Here we have the follow up to the very first video I did: The Crow Fens Pt.2! Given that I started this series last year - wayyy back in Unreal Engine 5 Early Access – I thought I’d take the chance to go back and re-render out some scenes with the full release of UE5.

So much has changed and a lot of the bugs and issues that I faced with the EA version are gone – and honestly – it’s so refreshing to not have to fight the engine every step of the way any more! It genuinely feels like now being able to use both hands after having months of having one hand tied behind your back. It’s exciting to be able to do more and more complex scenes!

Not to mention that I’ve just gotten better and more confident using the Engine overall – so I’ve also re-touched (remade?) some of the elements in the scenes with what I know now.

Here’s the to journey so far…!

Loving the progress on each video.