Is it something that can be easily implemented in UE4:

It would be invaluable addition to mobile VR projects.

Is it something that can be easily implemented in UE4:

It would be invaluable addition to mobile VR projects.

Looks very nice! I was sure it was a normal post process effect at first.
I wonder how is the influence on performances.
I don’t think this is possible unless you build it yourself :X

Here’s how its done Doom glare implementation
just out of curiosity, what would be a good way to implement this effect in ue4?
I thought about using this Procedural Mesh Generation
or could you do it using a shader?

GPU or CPU - whatever is better for performance in Gear VR

The first thing that popped up in my head was blend shapes, blend between like 6 different shapes depending on the angle to the camera.
But that’s maybe not doable.

I think it will be a good replacement of common post glare effect for low-end mobile devices.

Bumping this up. Maybe someone can make it as a plugin?

Just emissive material and bloom is probably enough. UE4 has really wide filter for bloom so it can handle this kind of effect.

Can’t have bloom in mobile VR (no post processing should be used). That’s why the effect has to be implemented as seen in those links in OP.

Btw, here is a plugin that does exactly what Doom 3 does and it works on Quest 2 wonderfully; 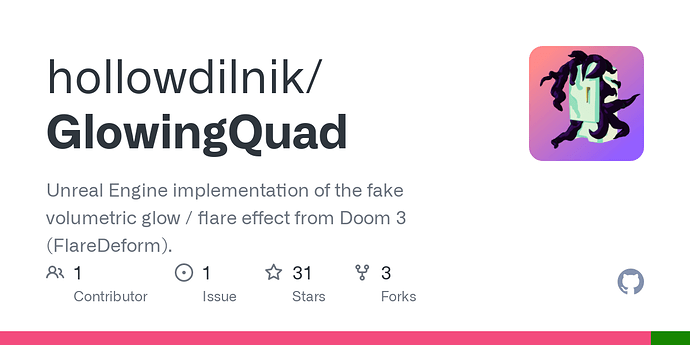