DK2 camera on a fixed matinee path but being able to look around?

Hey guys, I’m making this project where the player is sitting on a car that’s animated using matinee, but every time the car turns the camera is not “attached” to it, so it just stays in place, which is annoying, it just looks like the car is rotating but not the player. How do I “fix” the camera to the path, but allowing the player to look around, like in one of those rides or roller coaster demos?

I have the same Issue.
I am able to rotate based on HMD rotation, I use a pawn character that i move in matinee with a target.
But when i want to circle around a building the camera doesn’t rotate it’s center focuspoint, it just keeps it’s Original focuspoint.

I have spent a lot of time trying many options (FPS character, pawn character, camera. And this all with and without target point in matinee).

Here is also a related link about HMD orientation recently posted. Maybe it will help someone a bit atleast.

Gear VR - Is it possible to have head tracking for a camera attached to a a...

I’m working on an app for the Gear VR right now and I have run into an issue. If I have a camera attached to a spring arm for my character, the camera orientation is locked in place and will not turn with the Gear VR’s movement. I want to use a...

Still problems here with an matinee movie, i got the camera in vr oculus dk2 rotating with an animated platform in matinee thanks to an blueprint (see below), but now there is no headtracking anymore!

— I did build an platform cylinder and placed my playercamera on top, i animated the platform in matinee and rotated it as animation. When in the Oculus the view stayed at one point where the platform was rotating. After i did the blueprint you can see below in the image it worked in vr. The camera view was moving with the platform but a new problem started; Now the headtracking is locked and not working anymore??

Can someone help me on this? 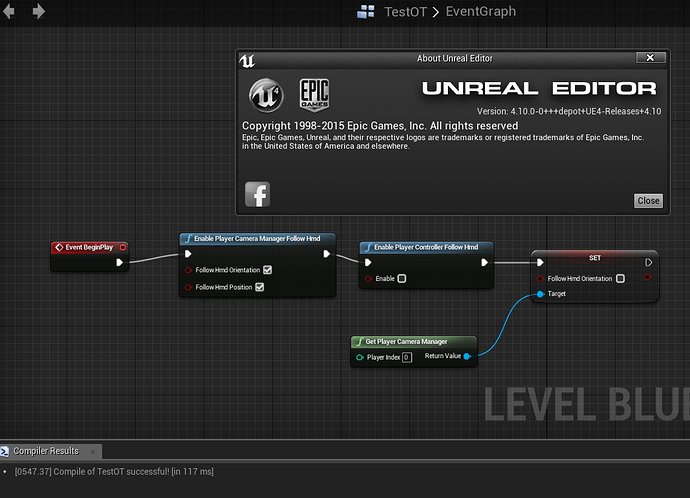 I got it to work, in VR with DK2 by Oculus, rotating on an animated platform and being able to look around in vr.

This setup did it bvut with Follow HMD orientation selected as in this image below; 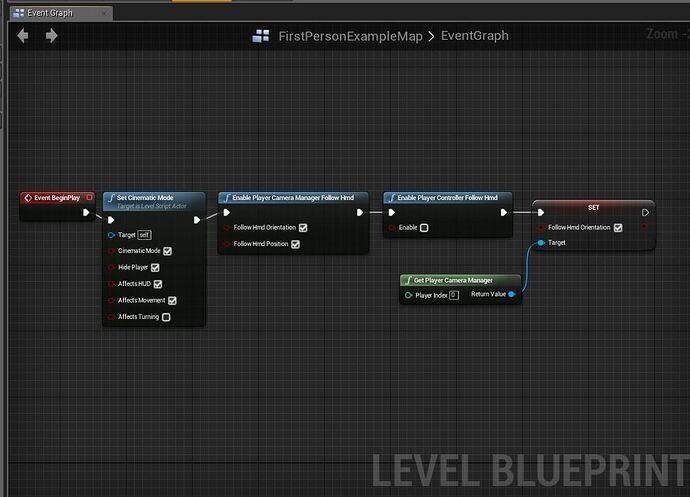 I got it to work, in VR with DK2 by Oculus, rotating on an animated platform and being able to look around in vr.

This setup did it bvut with Follow HMD orientation selected as in this image below;

Is your platform rotated using matinee? I’m trying to use the same setup, but it doesn’t work for me

I’m having exactly the same problem, matinee rotations are being ignored.

I am animating a platform with matinee, and using AttachActorToActor to attach my pawn to the platform. If I pause and eject I can see that the pawn and the platform are attached properly, and all locations and rotations are correct. The view position correctly follows the platform, but the rotation does not - if the platform does a barrel roll, the horizon will not move for the player.

Anyone have any ideas on what to do? Using SetControlRotation on the PlayerController works, but it give a one-frame delay which is incredibly noticeable for fast-moving matinee sequences.

can you guys upload some example how you managed the Matinee Animation with attached Player? I am quite new at UE4 and didn´t found any usefull tutorial. it would help me a lot! thx