WHy I get this weird shadowing on distant grass?

i think it is because beyond a certain distance shadows are not being calculated. I dont know enough of the tech to explain details but I can say a few things to toggle which may clean up the appearance:

you can probably remove normal maps from the billboard material

you can tweak dithering amount on the billboard material

you can tweak albedo values on the billboard material

Basically I’ve found that it is always necessary to make slight tweaks to the billboard materials for most grasses/vegetations in order to get a smooth blend. I assume this is considered normal, hence why the shaders people design for these things usually have tons of tweaking parameters like this.

But if you are working with dynamic time of day, you want to avoid making large changes to color/value. Ensure that it looks correct in all lighting environments.

A couple other things to think about: usually most games dont draw grass so far. Like 100-150 meters max. More large sized objects will tend to break up the view so the gradual fade-out of grass won’t be primary thing you focused on.

is there any tutorial on how to do that ? I am not sure how to and I see that the megascan materials hsvr no rfiting options for the grass, they refer all to a master material but the instances do not seem to have entries or even how to add textures , they just open up a window with the image of a ball with the texture on.

Then its probably worth seeing some examples of general foliage rendering so you understand the shader more:
Foliage Translucency - UE4 Materials 101 - Episode 30 - YouTube

I did those already but I coudln’t find a solution to this problem in there . 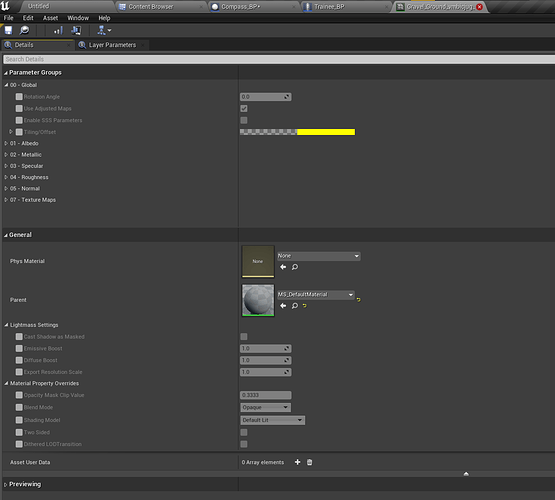 Opening up the material instance, you don’t see something like this?

This is the windows it opens .

in the menu tabs, under window, can you toggle details panel on? Reset the layout?

Ok I am stupid, yes under windows I enabled details and shows so the details …

what should I edit there?

those things i mentioned in first response are probably simplest and safest things to mess with.

Basicalyl my idea is to try and get rid of the specular shine because that gives away the plane and makes it not look like individual grasses.

I usually find the normal map to not make a difference or sometimes cause a problem so look and see if you can set the normal power to 0.

After that hopefully you are not able to distinguish planes easily and can just tweak the albedo values to get a smooth color match.

Just have to spend some time tweaking the values. The names are usually descriptive enough to understand what they do. But if you take some evening to watch some of those tutorials from ben cloward you’ll have a stronger idea of how the shader works.

I am not sure if the standard megascans shader is making use of dithering or not. I like it a lot for foliage and its easy to add if you wanted to try it.

Ok I found what could , perhaps be the solution , I edited the base material and I added this :

I will write it here in case others might incur in the same issue :

Then I see that the megascan material of the grass is actually two , not sure how are implemented but editing both I could in one edit the distant color grass and the other edit the close color grass, so working on both I could achieve this :

I still think there is an issue in the transition color and I am not sure where to go to edit this , but I think looks better than earlier already no?

looks good to me. Doesn’t jump out, has a pretty smooth blend.