i want to add the option to let spectators spawn when the server desires to, for example when any player reaches a checkpoint it will spawn all the spectators as players.

to sum up my question are:
1 - How do i unpossess the pawn and posses the spectator when a player dies?

I know the Destroy Actor node destroys the pawn and unpossess it, but is that all? do i have to make a Run On Client event and just destroy self?
and after that should i create an actor pawn and possess it?

2 - how do i respawn all dead players and spectators on a custom event called by the server? should it be a Run On Client and then the same process as before?

to respawn i tried using a Run On Server event with the player controller as parameter, inside it i destroyed the actor, spawned a new one and possessed it, but it is not working.
after this the client can’t move, the player is spawned but only locally and i can’t control it

i think i got the respawning working 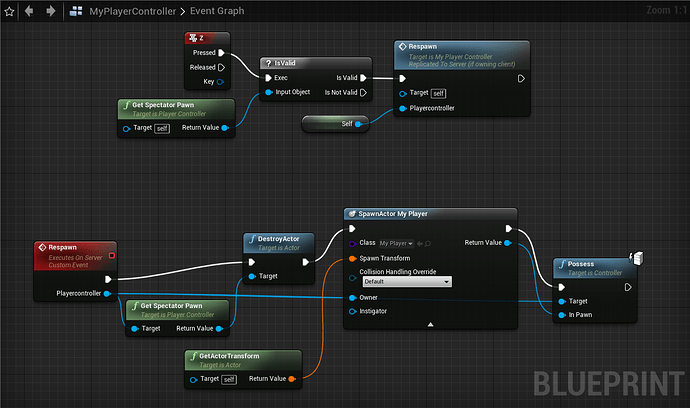 so i got my die/respawn system working just fine but it is a little mess, for the server to kill or respawn someone i have to take the PlayerController as a paramenter and i couldn’t find a way to get the player controller inside the server

inside this function i:
check if this player is alive, it it is i destroy his actor and then let him possess the spectator actor, then set a boolean variable that i also use to notify the player and do changes in the UI( i have 2 widgets, 1 for spectators and 1 for alive players)

is there a better way of doing this?