~ Diary of a new programmer ~

Hello guys ! This post will be like a FAQ but the thing is that it’s you who whill do this one. In this post, I’ll ask all my questions about UE4, all questions I have to advance and then I’ll edit the post making question + answer easily understandable for new programmers like me. Ii hope it’s not forbidden to do these things but there is a lot of things I can’t do so I’ll ask my question there !

I have a lot of questions about how did he make all the whole thing… The carpet on the floor, the furniture like cupboard, table and also the awseome kitchen, the kitchen sink, the oven, just how ?* ANSWERED

I know it’s noobies questions but I’m really new so please be gentle ! ^^

Rigging the character in your DCC
Create animations using software such as Motionbuilder or grab some free one’s from Mixamo.
Import into UE4
Retarget animations if needed
Create a character blueprint and map a key to trigger an attack boolean
Create animation blueprint in the persona editor and replicate the attack boolean
Create some state transitions based on this boolean in the anim graph

This is the simplest example I can think of (involving skeletal assets) and a lot of it may not make sense until you spend some time in the engine and some DCC software.

Thanks for your answers !

New questions when I’ll have some, this helped me a lot, thanks!

Indeed, I saw this page because I have in my favorite google chrome pages the “Tools and Editors” page in which I can see all the tools of UE4 but when I see the screens, it’s more like a 3D game but with a 2D camera, not a fully 2D game like the game I showed :s

Hey, 4 new questions. To experiment UE4, I want to make a little realistic house. For this, I need to build chairs, tables, furnitures, …

For the lights, I’ll use BP (I’m looking the tutorial on it) but for the doors :

Thanks for answers and sorry for my first questions !

You can buy such props here in marketplace, but they are bit too expensive if you want them just for learning. So for starting and learning if I was you I would look into free assets that are available in marketplace. Imo sticking to idea of making house instead of dungeon is not worth 200$ you would spend on few assets, while there is nice and free set of meshes for dungeons.

You need to decide what you are learning first, you worst enemy is skipping from area to area, when you see no effects of hours after hours doing various things in unreal. You should focus on single aspect first, until you have something done. And best (easiest) learning would be following some tutorial (for eg that video about making tank in unreal).

So at first do not try to chew too much, unreal is huge, and remember always focus on something that gives you some effect for your work, else we will never hear from you again, like from countless people that started something and dissipated after 2 weeks. Constantly feed your unreal madness.

First, I focus building a little house very similar to mine (apartment but I give an appearance to a house) to experiment placing BSP, scale, rotate them, import assets from internet (I found some websites), trying to make some with blender, do a bit of blueprint like turning on a light with the tutoriel on your youtube channel, I’ll also try to make a door openable and closeable if I can

It’s all these very basic things that a beginner can do alone with some researches on internet so I would like to try because it will train me in placing BSP, edit BSP, placing and edit materials, experiment BP, experiment blender in basic way to make props like chairs, these things very basic that will help me to do harder things later

So I’ll try to make a similar house to mine and once it’s done and once I’ll have my friends advices, I’ll make my first game for steam / Ios, a jump game similar to a climb mode in counter strike source. It won’t be the harder thing to do but I’ll need some knowledge to make this anyway so this will be a good training !

Thanks for answering, it’s good to be heard here

You will constantly hear me here because I have always questions, always x) (tell me if I do english mistakes, I can improve this in this way :p) 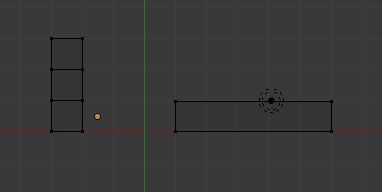 The 5 blocs on the right represent the first wall of my house when I enter in and the 3 on the left the first wall on the left when I enter (the 3 blocs missing in the middle of the both other is my door already created on UE4). When I’ll finish all the walls that represent all the rooms in my house and when I’ll expand these blocs to make them walls on Blender, will it look like walls on UE4 ? I don’t really know if it will be too short, too big or even invisible :s What do you think ? If it’s not good, I’ll make the house directly on UE4…

Question 9 answered, I’ll use UE4 directly to make my house, I have a good and encouraging beginning. For the question 6 part b on how to open and close door, I have the time to find how so it’s answered. For the question 8, I think all I have to do in import the content of “Assets” and put it in my "Assets’ folder, do the same with the blueprint part, … and then, I’ll can put the character on my level, I’ll try this in a while today.

Question 9 answered, I’ll use UE4 directly to make my house, I have a good and encouraging beginning. For the question 6 part b on how to open and close door, I have the time to find how so it’s answered. For the question 8, I think all I have to do in import the content of “Assets” and put it in my "Assets’ folder, do the same with the blueprint part, … and then, I’ll can put the character on my level, I’ll try this in a while today.

Be sure to check out the demo content on Unreal Marketplace, it’s got a lot of fantastic free demo projects.

For example doors opening and closing, there’s the “Blueprints” (titled as such) demo project on Unreal Marketplace.

Since you’re familiar with offline 3D (knowing Blender nodes and node-based workflow etc. helps), you should be able to get into UE4 fairly smoothly.

As you would with offline 3D, set up all your assets accordingly in UE4. Animations can be a little tricky but it’s quite logical in UE4 in my opinion. Then use Blueprints to make it all “come alive”.

There’s plenty of tools and tutorials for moving between UE4 and Blender so going back and forth with that should be straightforward.

For 2D I’m not familiar with that so will leave it to someone else.

I downloaded the demo content on UE4 marketplace yesterday, I’ll try it today to see what I can use for myself.

For the blueprints demo, I already visited it and yeah, there is an epic door that is opened in the two sense (one go to the left and the other to the right) but the door I use is a simple door as many in games, you open it in only 1 sense, forward of backward so I’ll see where I can learn this.

For blender, I’ll use it only to make objects (or animations earlier) but for my house, I’ll do it directly on UE4, it’s easier and I started yesterday

Thanks for the reply, it’s appreciated

If you ask me, stick with blender only for beginning and make basic stuff.
Learn some time then repeat from here, or buy stuff, form team up.

I’ll do it directly on UE4, it’s easier and I started yesterday

Do not use BSP brushes for permanent meshes in the map. Standard is to convert them into mesh, export in 3D app, remesh - uvunwrap, and then reimport in UE4

For the beginning, Blender and then ?

I don’t use BSP ? :o So can you explain me quickly how to convert them to mesh, export the min 3D app, remes, uvunwrap (wtf is this word ?) and then reimport ? I just rewrite what you said because it seems like it’s a good tip so thanks !

But no, I just can’t put a character on my blank project >< Any tip on this ?

I just want a character like the one in the content example of UE4. He is able to go in the 4 directions and even get more speed, it’s perfect ! How do I get the same ?

Ok, I found the “Create static mesh” option and so, I can import my BSP to 3DS Max or Blender (I think) so this question is answered.

Anyone can explain me how to take example from the “Demo content” ? I’m specially talking about blueprint, I don’t know how to copy the blueprints in this demo project to paste in mine

Nobody can answer me ? I tried to download a 3DS door file, I exported it (even if it was unfinished on 3DS Max…) and imported it on UE4 but it didn’t work… Can somebody help me ?

I saw this video : https://www.youtube.com/watch?v=09-Owqumeo0

I made the elevator as I would use it but the thing it that it works only 1 time, I enter the trigger, the elevator goes up and I added a key to make it go down after 1 second. The problem is that after, I can’t use it another time without exiting the game and play it again… Do you know how to make a thing that allows me to do it many many many times ? Thanks for answers !

(Also, I cleaned the post to make you know which questions are answered and wich aren’t, thanks for help anyway !)

If a moderator can delete the multiple post without answers, it would be nice, I put all my not answered questions on the first message, thanks !

Hey when editing a post you can delete your own posts. That will help keep the thread tidy. Good luck!

I made the elevator as I would use it but the thing it that it works only 1 time, I enter the trigger, the elevator goes up and I added a key …

Timelines ? The BP is the same in the video, this is a screen :

And thanks Srmojuze, I deleted.