In 4.7p8->Content Examples->Landscapes->1.2 Splines example.
The Edit Splines->Deform Landscape to Splines doesn’t fully work, some of the landscape and road break through each other.

Not quite sure the issue on example map. In my empty test project, some of it was due to spline being created with jagged edge instead of smooth curves(manually adjusted pitch/yaw to get smooth spline, not obvious unless zoomed in to see tiny crease folded over itself) or the ground was poorly formed with ripples/holes near that area(smoothed over manually first). Not exactly sure why terrain wont reform to road in the example.

Same issue in 4.6.1, the example hasn’t actually used the Deform Landscape to Splines feature but rather floats above the terrain. Probably did not exist at the time of example creation. 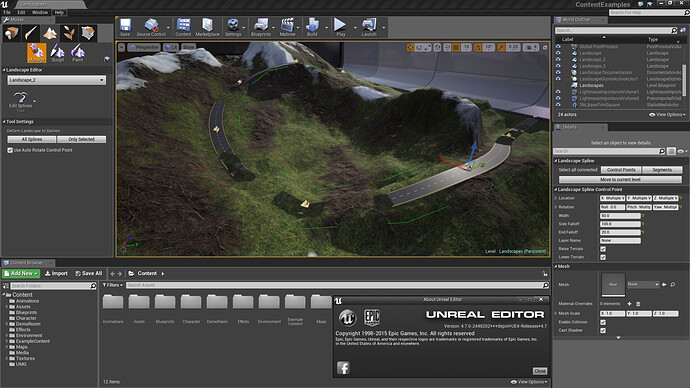 Thank you for your report. I was able to reproduce this and have entered a bug report, UE-10297 to be assessed by the development staff.