Stablize the decaying neutron by traversing its shell! Watch out for quarks!

Pretty rushed, but its… a game. Hope you enjoy. Spent more time making procedural spline tools than gameplay. I should know better. 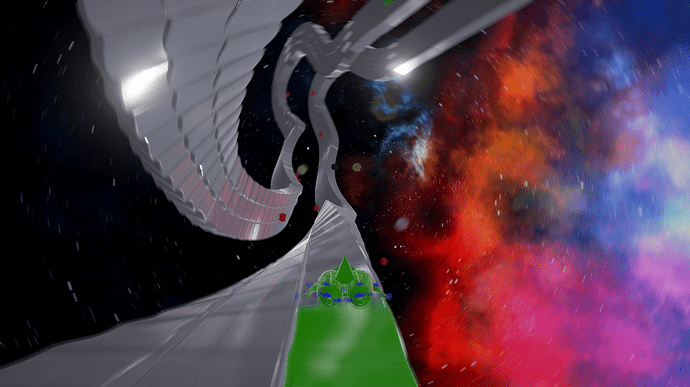 Summary:
In this game you control a crane that can pick up and move blocks. At the beginning of each level you are shown what the end result must look like. The structure is then toppled over and you must rebuild it. After completing all the levels you enter a free play mode where you can build whatever you want.

Additional Notes: “t.MaxFPS 60” should be put into the console to fix a sensitivity issue. Thanks to Allars stream for pointing that out.

Description
Mirror World is a 2D platformer where you must traverse through the real world and then the mirror world. Halfway through the level you will enter Mirror World where monsters appear. The game map is mirrored at the halfway point so you will work your way back to the mirrored version of the beginning of the game. Keyboard or Controller works. All assets were made by the two of us, except for the fonts. Hope you enjoy our game! 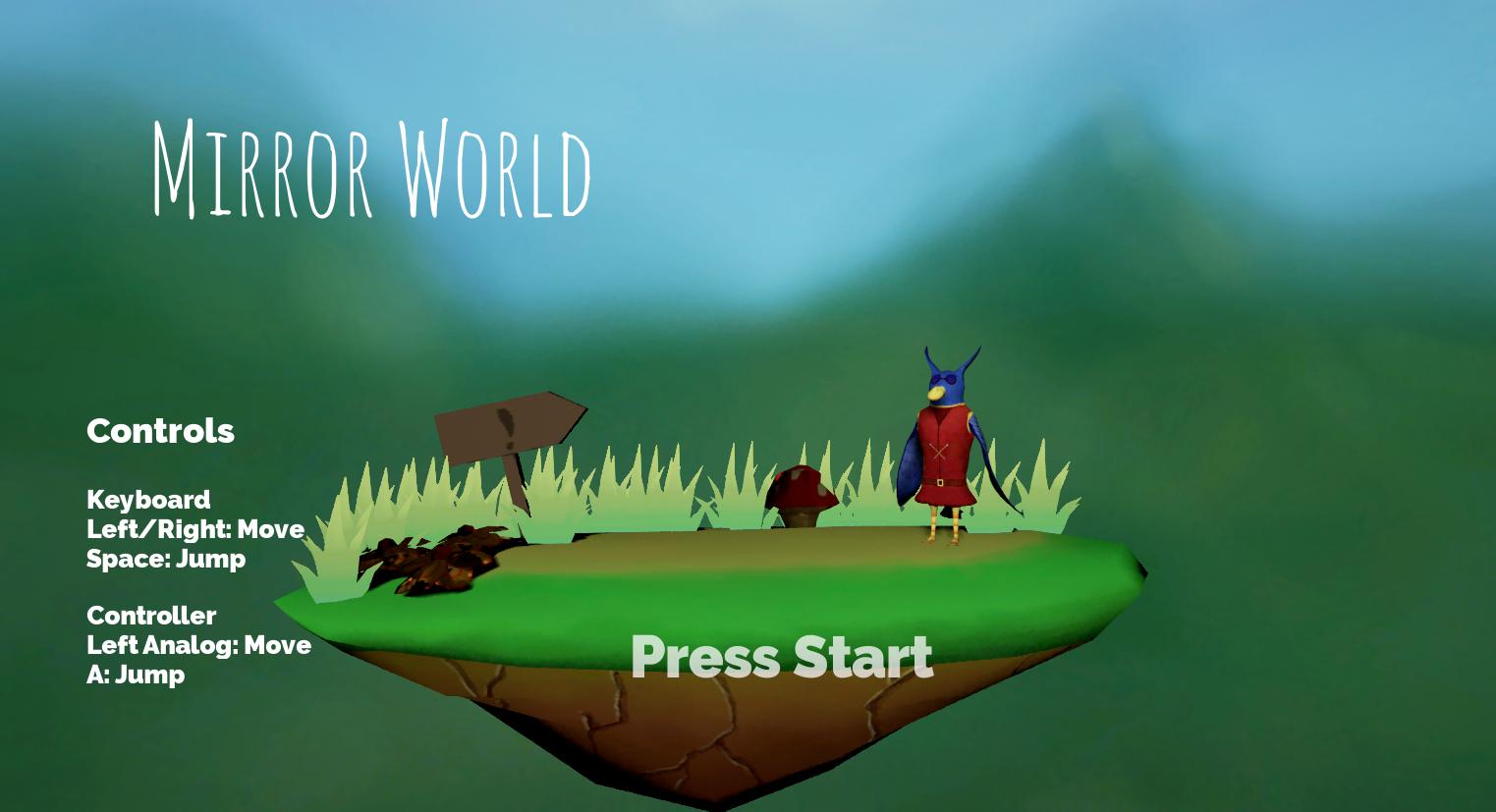 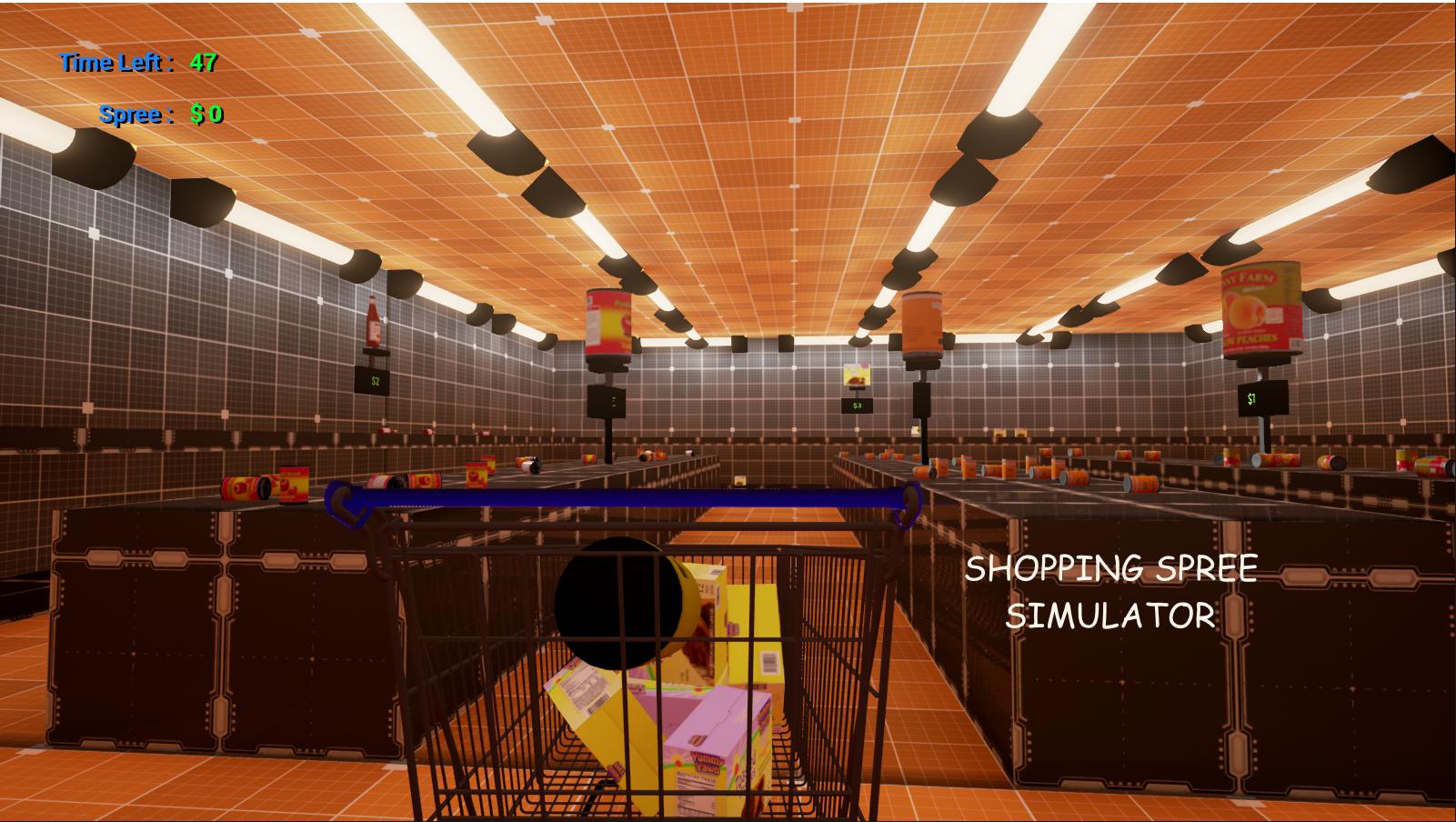 One Line Description:
Take the wheels of a sweet shopping cart and beat the buzzer by collecting as much as you can. Shop until you drop!

This one was close.

Big shout out to Nightasy for his awesome pantry stuffers pack. I would not have finished if it wasn’t available on the unreal market.

Also big thank you to rizy in UE IRC for helping with identifying the cause of a physics bug (when you play, thank him for things not exploding more than they do out of the cart).

Sandventures of the cursed mummy 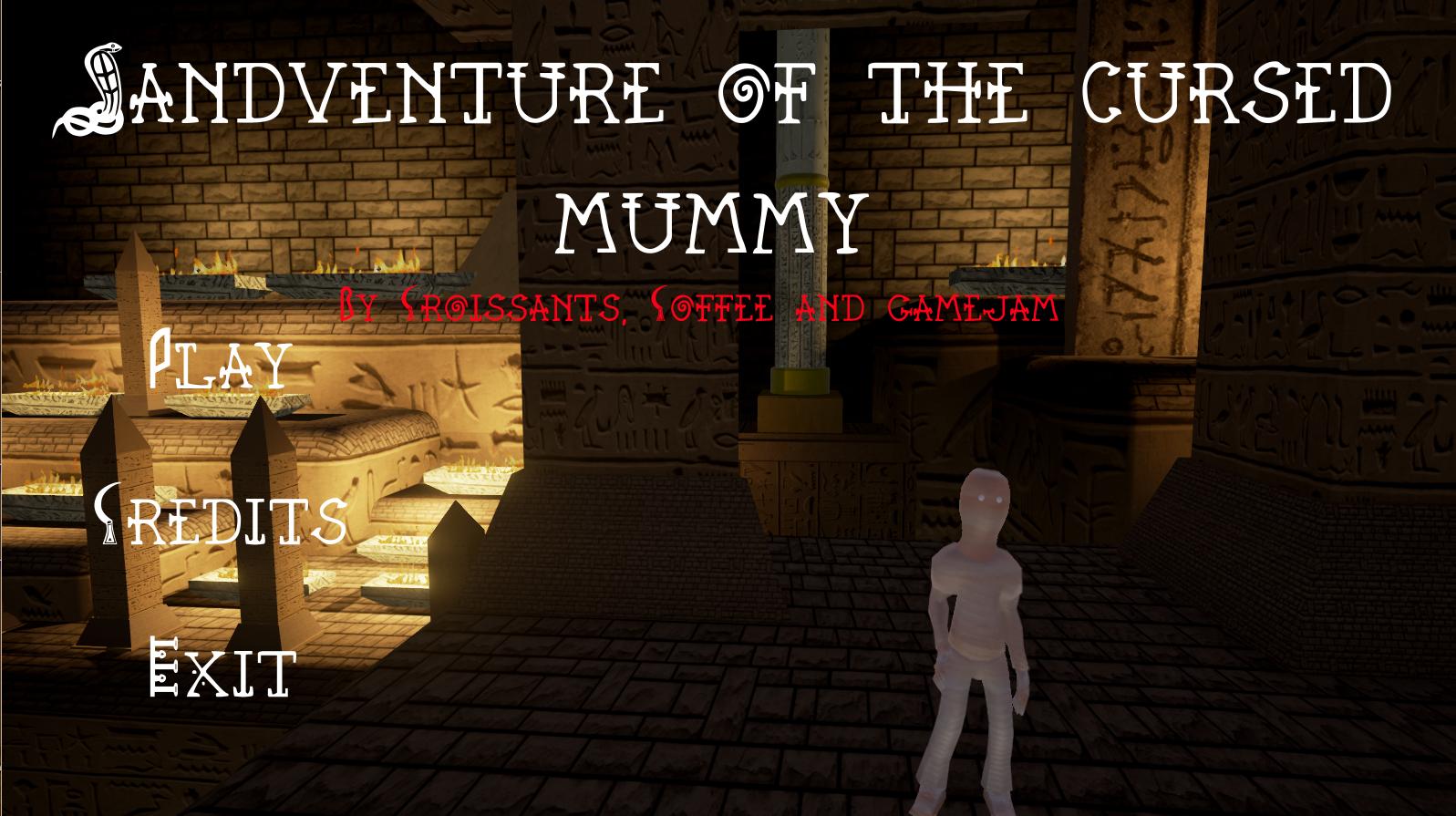 Sandventures of the cursed mummy is a side scroller with a special mechanic. You play as an explorer turned mummy and try to get out of the pyramids that you are trapped in. You can use your mummy bandage as a rope to swing across parts of the levels.

All assets except some of the textures(we have bought some on textures.com) were created by us.
We had a boss level, but sadly we didn’t finish it on time.

Controls:
You can see the controls ingame.
move with A and D.
Jump with W or spacebar.
use mummy bandage swiniging with Right Click.

Name of your submission: Minion Run
Link to a download of your game: https://drive.google.com/file/d/0B72v6ZoTO3PaT2pBT0tnR2dlYVk/view 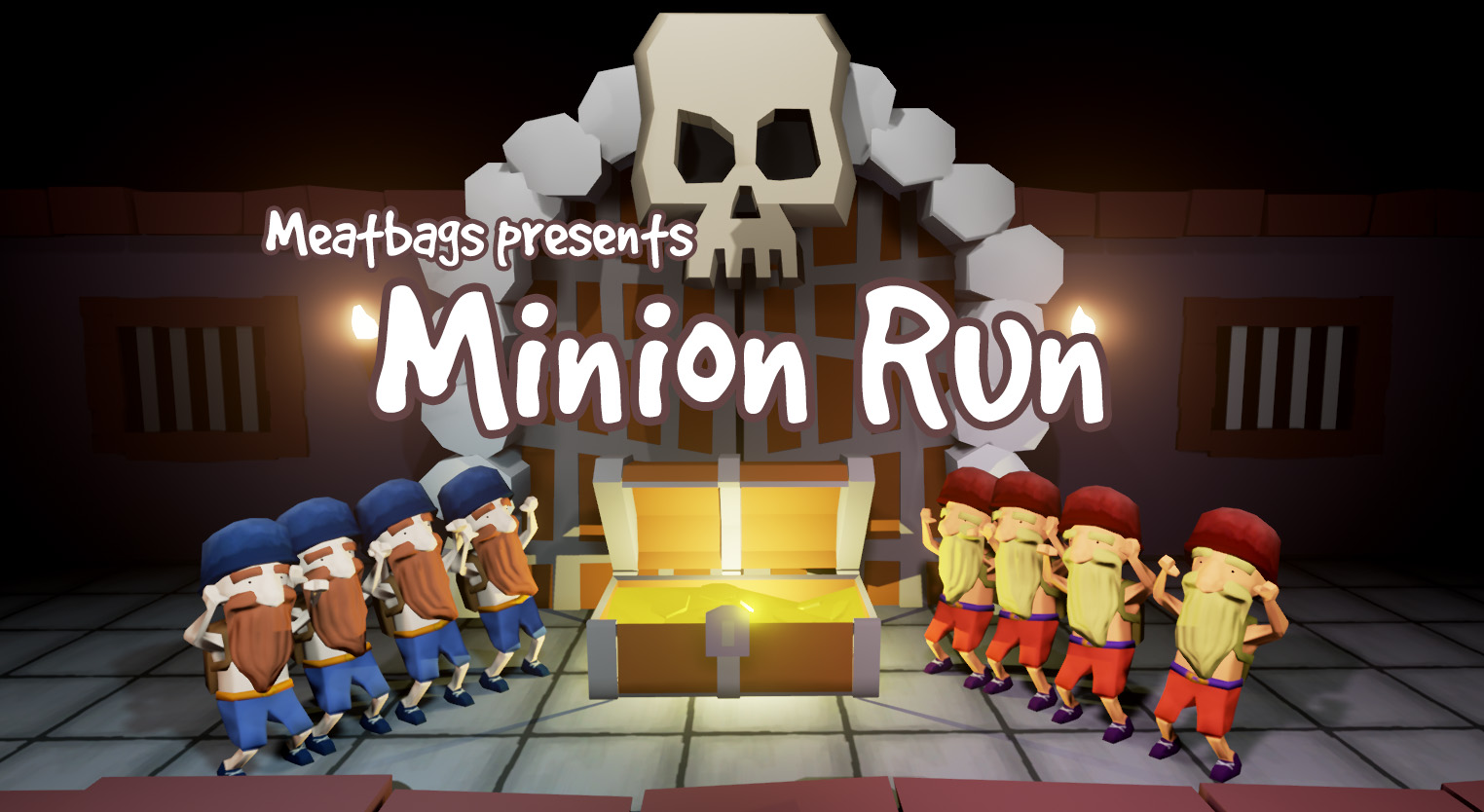 All the assets and code were done by us during the span of this game jam.

Two teams, one gamemaster each. The team with the most treasures at the end of a round wins. Gamemasters need to try and take down enemy minions (not your own minions no matter how fun that might be) using traps that they’ve placed.

Gamemasters -
Place traps by clicking on tiles
You can tell what team you’re on by placing a trap and seeing what colour the tile is.
All traps (except the pit trap which places you underground) needs to be manually triggered to kill a minion on it. To manually trigger them, click on it.

Minions -
Avoid traps, grab treasure chests and bring them back to your starting point.
WASD to move/T to taunt/Space to jump

You wake up in a hospital room. You have no clue whats going on, but you feel the need to escape. Dont let the staff catch you!
[Spoiler Alert: Then end is the beginning]

For some odd reason the cooking failed, and I didnt have time to run it again. So the link is to the project zip. It should open right up to the correct map. UE4 is also glitching and telling me that their is an error in one of the main blueprints. But if you hit build again, it runs just fine. So if you open the game and its just a flat plane with two angry people running at you, open the actor thats a massive billboard in the middle of the map, hit build, and play the game. Thanks for understanding! First GameJam!

WARNING!
THIS IS A POST DEADLINE GAME JAM FIX. If people are curious, what happens, they can try this fixed version. I detected a game breaking bug in the game, which didn’t occur in the editor. I apologize for the inconvenience.

Playthrough of the fixed version: 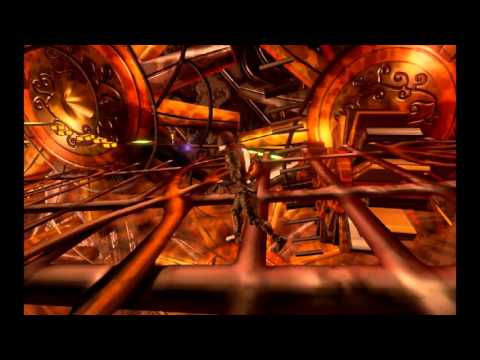 (If the level is too difficult to finish, you can try to open the map “BurningRuins” with the command line).

**Summary: **
Your parents died a while ago and a mysterious man wants to give you your rightful heritage. What exactly did your parents leave you behind?

The controls are pretty simple:

Spacebar: Jump
(While jumping, you can hold down the space bar to get much quicker back on the ground.)

As you may have seen on my previous game jam submissions, each month I challenge myself to focus on something new. This month, my focus was “game feel.” I received feedback from most of my other submissions and found that most of the time while there was something cool about my games, they weren’t by and large “fun.” Hopefully this month you will not be disappointed!

100% of assets were designed by myself. I even wrote the music track today!

A+D to move left right.
Mouse to look.
Left mouse to shoot.
G to switch weapons.
E to use (opens doors and activates lifts)
L to turn off your headlight. (If you’re brave?!)

Download < link >](Dropbox - FreshLemonade_FallingAsera.rar - Simplify your life)
I was having trouble building Shipping last month so this month I did development build. This way you can also setup your custom resolution!
How: Press ` (tilda) to open the console. Type in “setRes [dimensionX]x[dimensionY]” eg: setres 1366x768. Add an f after for fullscreen and w for windowed.

Feel free to have fun playing the game. Ammo is unlimited, a lot of stuff is destroy-able!

The basic premise of the game (if the intro is too garbled to understand) Is that the people of Earth have lost a battle against the “AI” and are retreating into space to forever leave earth and make a new start on a colony. However there is an AI space base in the way and you are teleported in to disable it. As always there are things get abandoned due to lack of time. The character sprite doesn’t have a run animation, and one of the enemies blinking animation bugged out in the last few hours for some reason haha. There shouldn’t be any gameplay related bugs though. Feel free to let me know if you find some! Originally the idea was that as you progressed you would actually “level down” thus starting in the beginning with a boss fight, and working towards the “finish” in what would normally be a start area. This is also why the game progresses from right to left. Thanks for playing!

Shaving Day : The Shave After Tomorrow

Description:
You and your team are faced with a giant demon that you cannot defeat. Before annihilation you use your time crystal to travel back to the start of your adventure to level up and be stronger when facing the demon.

Warning: The game is unfinished, I tried to do too much. The final boss does not fight nor can be beaten. The AI unpolished and somewhat broken. You are invincible and cannot die. Leveling system not implemented. 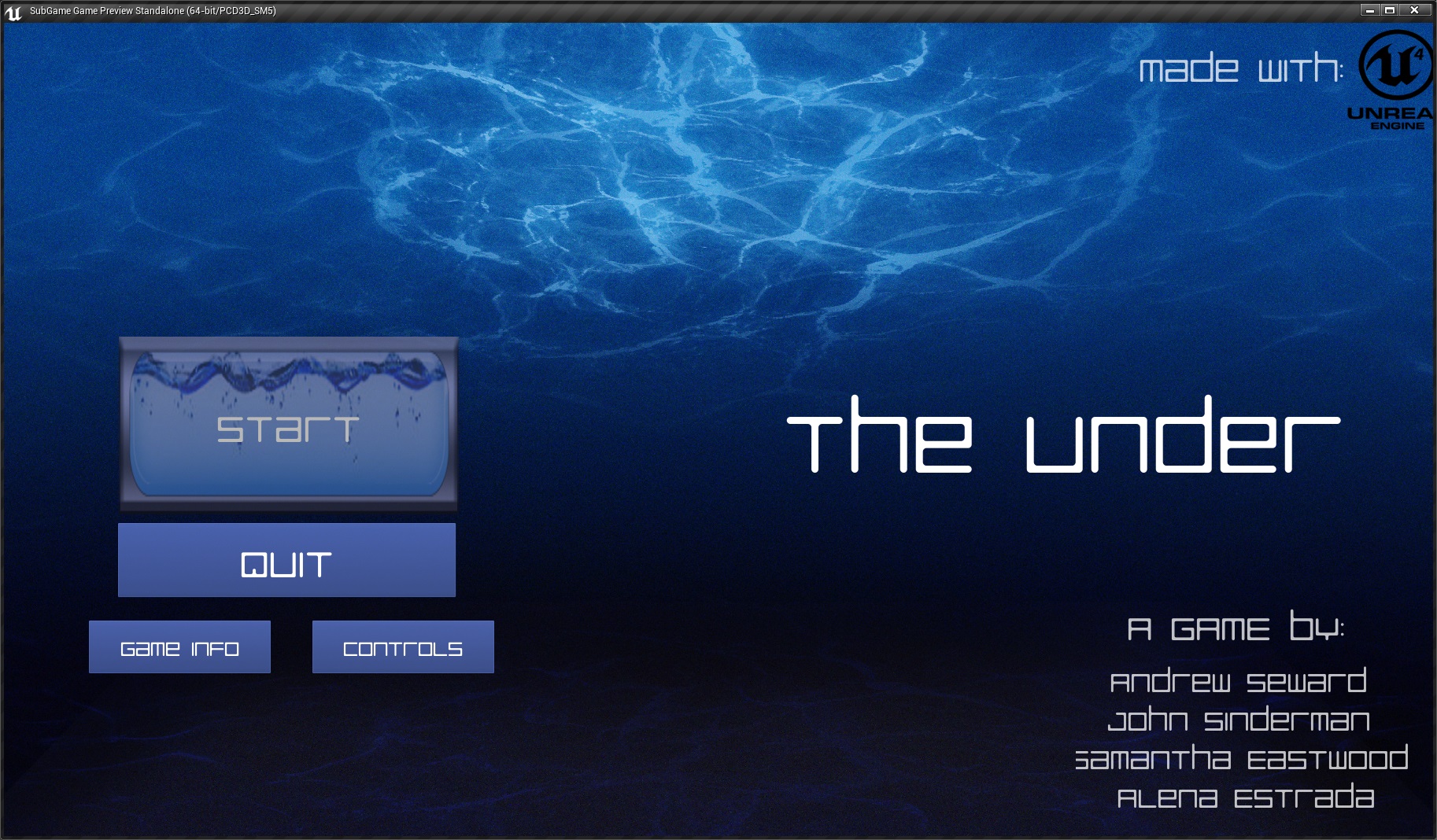 Download Link:
HERE
(Note: At this time, the only supported resolution is 16:9.)

Hope you enjoy! It’s (Most of our) our first! 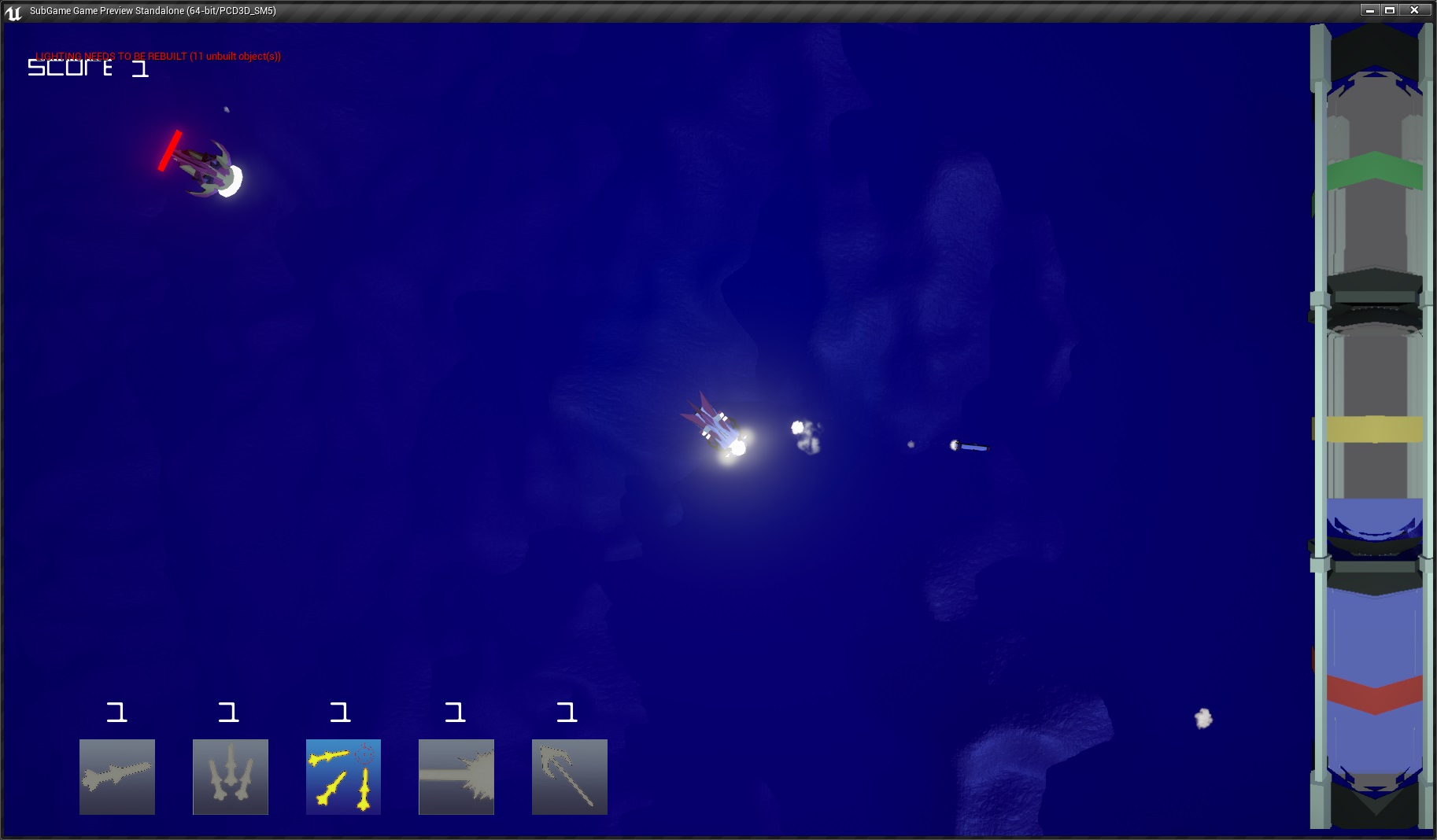 So you tried to save money by buying cheap candles this year & burned down the tree!
The Tree has to be lit before everyone wakes up, but light the bad candles & you’ll burn down the tree! Again!

Game: Beginners End
You and your little brother is alone after an apocalyptic event. Your only hope for survival is to loot old buildings for food and resources. Where you start is where you need to end. Enter locations and solve puzzles to survive. What the location have to loot is indicated on the wall where you start. The goal item is the most important with the collectables next to win a level, bonus stuff is … bonus. It’s almost Christmas and you must collect goal items to make it a little bit better for your little brother in this dead world.

Not nearly done with everything and there is only one level, but need to submit.

Information: Mild dreams is FPS adventure game, where you explore the difference between reality and dreams. Spirit of this place must save this place from evil… even after another victory.

P.S
My first game ever made
P.P.S.
Finally! Resolved all issues occured in packaging. Sorry for the late sub, had problems with packaging and fixing stuff to work in build… sigh…
Formerly from team KawaiiSoft but now jamming on my own.

I made a Ludum Dare game with Unreal over the weekend. It’s called “Berry Thorny”. Ludum Dare already had two themes so I wasn’t able to follow the theme, but other then that it’s legit.

Team Name: KilledByAPixel, only one person 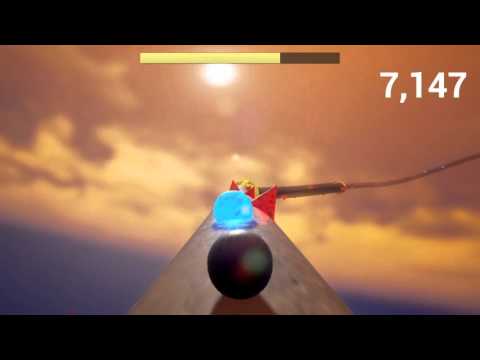 Also, here’s the project file if anyone’s interested in how I did it. A word of warning though, I did so many things the wrong way.

Things that I finished:
Flip your vehicle and get points.
Split screen.
Vehicle sounds.
Placing environmental rocks.
Adding grass and trees, then removing grass and trees when they wouldn’t bake.
Modeled a lame palm frond kind of car.

Things planed and not finished:
“Grow” a car by “polenating” (ramming) other cars.
When the round begins use your genes to choose car attributes like tire friction, power, and colors.

At least the score kinda works, for the first player.
It was fun! 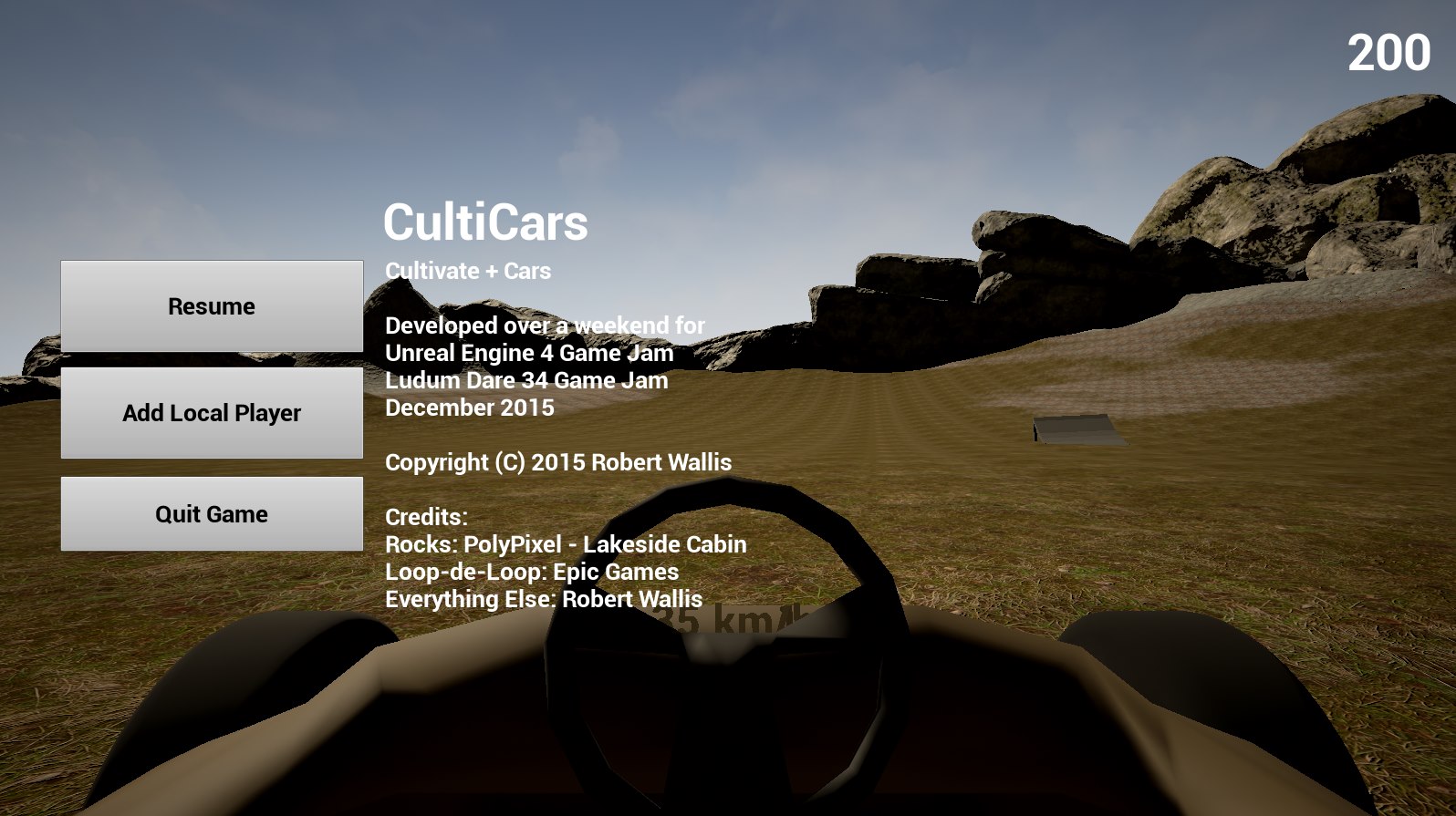