Hi, In UDK I managed to get some help from a tutorial on how I could use only a certain part of a texture sheet as a tiling texture. To circumvent the texture sheet limits within a material I put 2x2 normal maps within the same sheet.
This let me use a lot more landscape layers and worked perfectly, but I can’t get it to work in UE4.

I’d love to get some help with this as I’m pretty much stuck at the moment with the landscape that we’re trying to port over from our UDK game we are developing.

Looking for the same question I’ve stumble with this question. And also with this doc that explains how to achieve the desired result:

A wide variety of functions designed to aid in working with textures, such as reprojecting UVs, cropping, and many more.

I know that the thread is old, but I hope that this will shine some light in another person looking for the same thing

Sorry but that unfortunately doesn’t solve the problem. It’s useful if you only want to crop it but not if you want it to tile as well. It doesn’t actually crop it, just resize it and pushes parts of it outside of the texture space.

“This function does not actually perform a true cropping operation such as one might be used to in image editing packages such as Photoshop. Rather, it remaps the existing texture to new coordinates in UV texture space, which is a lot more like scaling than cropping. However, the function is still highly useful for generating masks and adding color to texture regions.”

There is this old UDK solution:
UDK Texture Packing. I’ve reproduced the nodes in UE4, it seems to work.

But there is a cave in: There will be a little bleeding in the textures (visible in the preview). You’ll have to account for it with a little padding in each subtexture and a lot of tweaking in the values of Start X/Y and End X/Y (there is a in-depth explanation in the link) 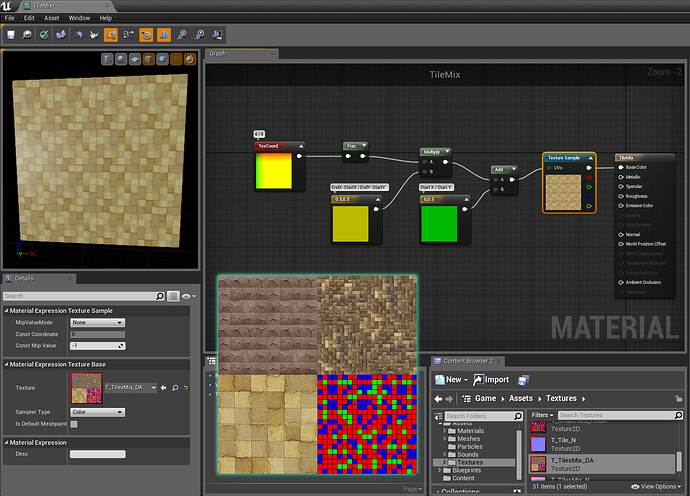 First of all; Sorry for the late answer, I never got the notification (or missed it) that you wrote again so I didn’t notice.

Thank you so much for informing me about this though!
Back when UE4 was released the old UDK way of doing it didn’t work (If I remember correctly the Tex2dGrad string didn’t work) and I never noticed that they had changed anything that would make it work now.
This will make it a lot easier to build more advanced landscape materials again!