Hello everyone, this is an RPG Template that I’m releasing. This template will be updated frequently as long as there are items in the backlog. I will also be providing support. The project will be submitted to the Marketplace upon hitting v1.0.

The Sellfy link for purchase is here:
https://sellfy.com/p/NeVW/
Pricing is set at $79.99 until submission to Marketplace where the price will be set at $89.99
We offer an alternative revenue model where we take 1% of your revenue and the upfront cost is $9.99. Please contact me via PM for details on this revenue model.

Items Currently Available within the Template

If you have any other features you’d like me to add, reply and I’ll see if I can add it.

Q&A
Why was there such a big gap in updates?
There was a lot of work in the QA Process which had to be resolved. Thankfully everything is stable and operates how it should for almost everyone.

How can I get a hold of the C++ Version? I need the optimization in my project.
Thanks to Epic changing their policy, I can create a plugin now for release on the marketplace.

When is x feature going to be supported?
All features slated for v1.0 have been finalized and completed. Any further features will have to wait for the next version.

What about Paper2D?
All classes in theory are compatible with Paper2D. I’m not an expert in creating sprites so I’m not including those.

What about your Motion Captured Animations?
Due to current restrictions on the project from where this template came in the first place, I cannot include these animations until the current project is done.

I have an idea for a feature. Can you add it in?
Sure, just PM me with your idea and I’ll add it to the backlog. Not all features will be in C++

Are you planning on submitting it for marketplace release?
Yeah, it will be submitted this Friday on the 29th of August. If you need it immediately you can purchase it from my storefront.

In honor of v1.0 being released I will be holding a Twitch Stream on Sunday August 30th at 7:30PM to give a quick overview of the RPG Framework along with answering questions. I hope to see everyone there!

I’ve gone ahead and uploaded the first video showing off the project. I’ll be uploading a much longer video next week. I’m kind of short on time today, otherwise I would have shown off more of the template. 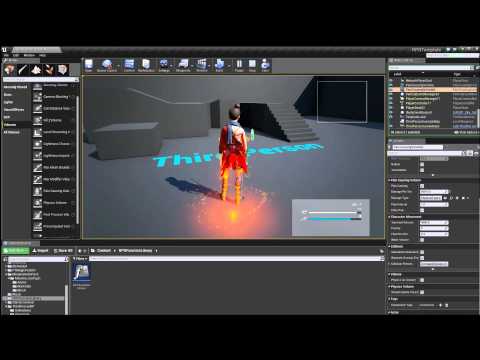 If you plan on extending any of my Character blueprints in this project, please work off a child blueprint for the time being or duplicate the MyCharacterJill blueprint. This allows for you the merge the updates.

All buyers will get access to my git repository where they can get cutting edge updates outside of the master branch. Tutorial videos on how to use our framework will in both English and Japanese will also be provided for all buyers.

Great to see someone else is taking up the challenge of a RPG template.

That said - I personally would like to see Cooperative play (2 - 4 player) support for the Action RPG part of your Template.

EDIT: Totally forgot to say this - But please comment your Blueprint code. I mainly buy Blueprints to learn and Expand on them

Hi srkibria sounds ambitious (in a good way). There are several independent systems in the marketplace that attempt to meet the demand, but, I believe many are holding out for unified RPG Framework. Any plans for a Quest & Dialog, Narrative Systems? I concur with Co-op Multiplayer support.

Hey HeadClot, I’ll work on that. I don’t have a timeline for that but I will add it in. I am working on commenting my Blueprint code right now so that it’s easy to follow. I mainly work in C++, but I’m migrating everything into Blueprints to make it easy for people to follow.

TechLord, I already have a dialogue system in place which uses CSVs to drive dialogue. I’ll add in a Quest system. I want it to be a one stop solution for anyone creating an RPG. If there’s anything else anyone would like to add, I’ll put it in.

Great to see someone else is taking up the challenge of a RPG template.

That said - I personally would like to see Cooperative play (2 - 4 player) support for the Action RPG part of your Template.

EDIT: Totally forgot to say this - But please comment your Blueprint code. I mainly buy Blueprints to learn and Expand on them

For me Split Screen would be best.

However I would not mind Single screen Cooperative play

Ok I’ve added that to my backlog. I’ll update this with more details as I get further along.

I think that in the “extra items”, the quest system is the most important. Once that is implemented, and the other items are implemented, it would be a good framework for release. The added options, animations and meshes, could very well be added to the marketplace as separate items.

One thing I have been thinking about for awhile, is a “build your own skills” for the players. For example:

This would then branch out into a few choices, for example, melee would have a “dual wield”, 1h, 1h/shield, etc… Let’s take magic though:

Something else that I feel would be pretty important would be a “Character select” screen that allows for customized characters that derives the morphs from morph targets. Of course, everything should be replicate-able, and if possible, allow seamless integration into the mmorpg template by CodeSpartan.

That already exists within my current template. I can add skill trees to the template which seems like something you mentioned.
Can you elaborate on Choice 5? What do you mean by this? Do you want the actual particle effects and decals?

The only thing that doesn’t exist right now is the the “Character Select” screen you mentioned. I’ll add that to the list, but I’d have to do more research on how that’s done. I think though I can do that. I’d like to do seamless integration into the mmorpg template by CodeSpartan, but that’s something I can only do once I’ve talked with him about this. I’ll talk with him once the template is in a more complete state.

The effects in choice 5 are status effects. What I mean as far as creating these types of skills is to allow the player to create them, not only the developer, as I’m not sure how much of this could be exposed to the player.

Status effects, for example, bleed/burn/dot are X damage over Y time… I suppose that for each dot damage type, a different particle effect/decal would be used. Other things though would be mezz effect (Zzzz or somethign above the character’s head?) etc…

Alright got it. I’ve updated the original post to reflect that.

Any pictues? :3 would be awesome

If everything is and does what is maintained in the first post I’d buy it.

maybe. There has to be enough showcase like the other threads. Youtube videos with documentation would do best for presenting.

Just a thought - Would it be possible to add Paper2D Support for this?

I’ll be adding videos soon showing off the system, probably at the end of this week. I can add in Paper2D support.

pls make the video as long as u can get it! As much info as possible! And then hopely u can add a tutorial on how exactly to add it in a normal template project. Thats what im missing with the others…

The idea is that the template will be used as the base for the project. I hope that makes sense. Making videos right now on how to implement the functionality of the template is probably a bad idea, since things are still in development. I’d say that’s around 3 weeks off at this point. The template is fully in blueprints (but I’m debating adding in the C++ code currently used for anyone that wants something more optimized). I’ll detail how to add characters and such closer to the launch of the template.

Much thx many wow and more nice :3