Hey
I’m working on my game and I noticed something.
I have a main blueprint character, and I created a child out of it, and for some reason the Child BP doesn’t save the marked boolean after I go out and come in the engine it just restarts the value of the Main blueprint Character boolean
any idea how i can change it so it would save the boolean value?

anyone? i really need help with it i cant keep woirk on the game without it

If you exit the game and go to the editor and exit the editor and go into the game, all variables and such are reset to whatever defaults they start with. If you want to have the child save that information, you would have to script it to save the data when exiting and load that same data when spawned.

Another way to get around the save/load thing is to store the data in a blueprint that does not get reset until the game processing has terminated. That would be the GameInstance blueprint, I believe.

i dont think you understood me, its not like the varibles are npt working in game, but the boםlean in the details tab is keep restarting to the same Boolean (Wave 1) and not stay for example in (Wave 2 or Wave 3) 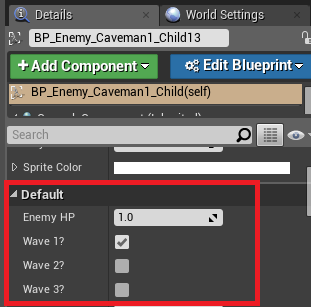 This is an old bug that completely stops some blueprint related work flow.
If it is a small project you have, and you can replicate it happening, I suggest you create a bug report on answerhub, with repro steps and providing the project.

If you post your parent blueprint we might be able to get to the bottom of this but perhaps somewhere in your parent you are setting the Wave info and enemy hp and it is overriding any details you put in the editor/child? What is in your construction script on Parent/Child?

I’ve had this bug before. It’s infuriating. Also one that clears all structs (which started happening after I used structs to fill in a lot of data…).

I’ve read it’s related to renaming parents but I’m unsure. Since reading that I avoid renaming anything, and no problems since.

This is a very late response, but I’ve noticed that making a development build in visual studio code (shortcut control + shift + B) fixes a lot of issues for me with blueprints having issues that are caused by reloading the project
Alternatively, you can add a variable in the blueprint, give it the value that you want, and then set the variable from c++ in the event graph (it might need to have this UPROPERTY(EditDefaultsOnly, BlueprintReadWrite, meta = (AllowPrivateAccess = “true”)) above it)