I was wondering if I can create my characters from scratch, if so how can I do it

Yes, you can, you can create everything from scratch. For characters, you first need a 3D program, Blender is free, then there’s stuff like Modo, 3ds Max, and Maya.
You would model and animate your character in the 3D program and export to UE4. There’s many character creation tutorials out there to look at.

Which is better and how do u export characters?

Which is better and how do u export characters?

I personally would recommend you blender -> free and nearly as good as the other ones.

You will have to create the character mesh - add a rigg to it - create your animations - click on export - choose fbx - import the fbx file into the UE4
e.g one way how you can do it: UE4 Blender Character creation & animation tutorial 1 - YouTube

That’s a lot but sounds good

Mostly you start with a cube -> Blender Character Creation: Modelling - YouTube (this tutorial will explain you everything)

I use makehuman to create the base mesh of the body of the character… and export it as an .mhx (I think) and import into blender then I take a sphere or cylinder and lay it exactly over the body parts like legs (for making pants) or torso (for making shirt). then edit the vertices so it looks like a pant (or shirt).

After that I just delete the vertices of the body above which the shirt or pants lie (for better optimisation) and then texture the clothes… rig the character . (you can use the mixamo auto rigger as its really easy to use and gets rigging done in like, 2 minutes

and also as of now, mixamo offers 10 free auto rigs for free users

PS : – A tip ! When you export the base from makehuman, make sure the body has a skeleton selected (a simple one will do too). Then BEFORE making the clothing make sure to move its arms so its in an almost perfect T-Pose. This is important as if you rig your character in mixamo from the default pose of makehuman (in which the arms are a little relaxed or something). Its going to have many problems, whereas if you rig it from the perfect T-Pose, the rigging will be almost perfect

Then animate the character (for my first time I saw the tutorials by ‘Darren Lille’ on youtube… its pretty useful. Use these for animations. or if you don’t want to make animations. you can use the free ones from mixamo (I doubt those will help though, n I prefer making your own animations)
After you’re done with animations. export all of them one by one as a .bvh file. Then download your rigged character again from mixamo. Except this time. choose ‘FBX for Unreal Engine 4’ .
Now import the downloaded file into UE4 and then import the .bvh next (I’ve not tried this part YET but I suppose it’ll work)
Cheers bro

For prototyping, you could try Mixamo Fuse. It’s free on Steam.

I got it to work. I was wondering if I can put clothes on my person or do I have to go blender to do that

I got it to work. I was wondering if I can put clothes on my person or do I have to go blender to do that

Make the clothes in blender? Then import them? Also, try wings3d. It’s a great FREE easy to use program. But you will need to do rigging inside of blender. But, it’s great for inanimate objects. 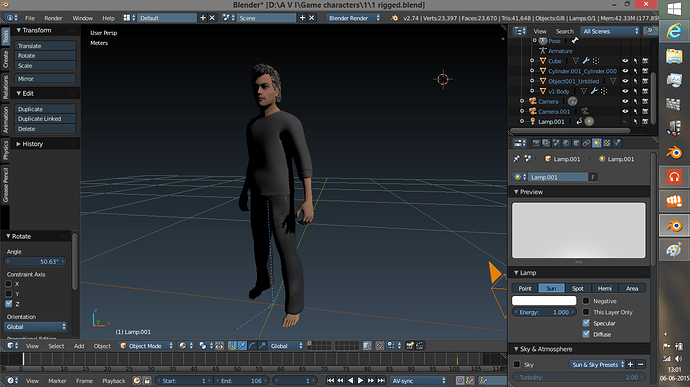 This is the guy I created from the same process as I mentioned here… I find it the easiest but if you have problems in making clothes, there are some clothes inside makehuman as well but if you want your character to look good, you should make your own (PS - Its not that hard)… Also, Wings3D is great too ! And Plus, there’s sculptris too (I haven’t used it for clothes but its a great sculpting tool, AND its free

Thanks TheVirtualDude! I forgot to add scuptris! It such a great program!

I recommend Maya LT. You can pay 30/month to license it and Autodesk gives free student editions(for 3 years) so you can get familiar before you buy.

I was gonna try to make dragon wings along with clothes

the process to make dragon wings will be similar to making clothes I think… BUT if you want dragon wings that means you need to create some bones of your own if you want the wings to be moving as the auto rigger only rigs your character with a normal human skeleton… not dragons, not dogs, not robots, not chuck Norris… :v
But I don’t think creating bones and weighting them for just the wings will be that hard. so just watch a good rigging tutorial, understand the basics. and create the additional bones you require, trust me dude its not that hard. Just keep trying you’ll get there… my first character looked like a hybrid of a horse, human and alien :v :v :v

Thanks. I’ll see what I can do

Honestly you’re probably better off working with Mixamo Fuse or a similar program if your intent is to try and learn UE4 development. You can’t pick up a modeling software and go from barely putting two squares together to a fully fleshed out & detailed character within a month. The learning curve in any sort of artistic process is just simply not that accelerated. Feel free to spend all the time you want learning it if that is the path you want, but to learn UE4 you should use stock assets or assets that were generated from templates.