I’m trying to make one of the sliding style games i.e. tribes ascend to practice, but I haven’t found out how to get the collision capsule to follow the player’s hmd. This is how I have my pawn setup: 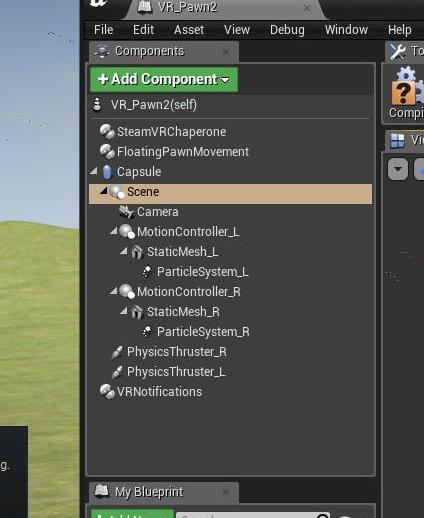 The thrusters are placed on the motioncontrollers every tick, my reasoning being that it applies thrust to its parent.
However, collision stays stuck in the center of the chaperone, not following the player. I’m stuck as to how I should continue.

The whole editor.
Using 4.14.1
Using Mordentral’s VRexpansionplugin, the editor crashes when trying to enable physics on the VRRoot component.

What do you mean enable physics on the root component? As in simulate it? Why would you try and do that to a character root? I don’t doubt it crashed.

If you are trying to do tribes style movement with a character you would want to input the thrust vector into the movement input (addimpulse or addforce), not simulate physics and actually add physics thrust.

The VRCharacter also does a ton of tricky things that might not like simulation (setting its physics world location directly). The SimpleChar would do you better likely.

That being said a standard pawn with a floating movement component could be made to work for you as you want to customize the movement anyway, you would just have to run your own traces.