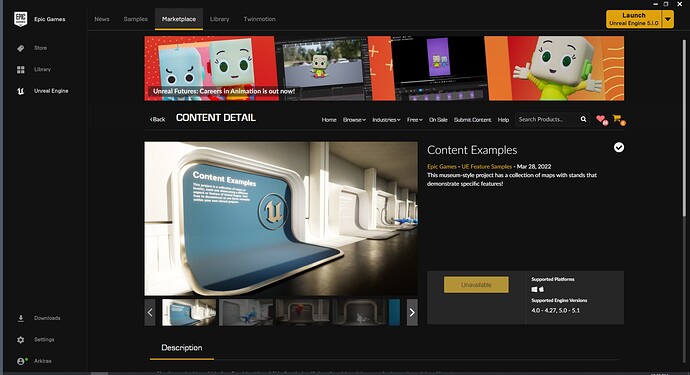 How can I fix this? I’ve downloaded the content examples at least a dozen times and never encountered anything like this before.

Hey there @Arkiras! That’s a bit odd. It does show you have it in your vault with that check mark. Worse case scenario we might need to go to the vault cache and delete the files for it so you can redownload it. Generally the unavailable button comes up when there’s in issue with the internal location it’s in, otherwise it should show create project. Another way this occurs is if you don’t have a compatible engine version with the version you had downloaded, so if the 4.27 version is still in your vault cache, you may need to toss it so you can download an updated variant, though this is not intended. Unless you hadn’t downloaded it before, then we may need to put a ticket in with the marketplace team.

Hey, thank you for the response. I have resolved this by reading through this thread it seemed to be an issue with the shopping cart (???).

All I did was just opened my shopping cart which had zero items in it. A minute later the issue was gone and I was able to download the content examples project again.

I am really baffled as to why this happened, or if opening the shopping cart even did anything or if the timing was just coincidental…

Sometimes it’s actually related to the metadata of acquiring an item on the shop. Without getting into too many details, it’s supposed to display either create a project, unavailable, or buy/download for free etc. Unavailable is the fallback if you can’t do any of the primaries. It likely had that you attempted to readd it to your vault while it was already in there and caused a snafu. Glad you got it sorted, whenever you have that occur again, it’s good to run the full gambit, and worse case you delete the local cache and when it looks for it, it will allow you to redownload from the vault directly.

I had the same problem, i had to grab and “buy” another free thing from the marketplace to get it switching from “unavailable” to being able to create a project. Just opening the shopping cart wasn´t enough in my case.
Maybe it would be a good idea to add a check for this to the launcher? We have the option for changing the location, we have the option to search for errors, maybe add a function to quickly check (and repair) the paths or have it check, if that stuff still is, where it has to be to be useable