Currently using UE 4.19.2 . The attached screenshots are from a new project and default level with an unbound post processing volume. Changing the colors of the lens flare tints in the post process volume settings does nothing to the lens flare colors. Am I doing something wrong here?

I can confirm. This is a bug. It also unchecking all the tint checkboxes if any of them is unchecked. Exist in 4.18 and 4.20.
You should make a post in bug reports section.

Could it be GPU related? 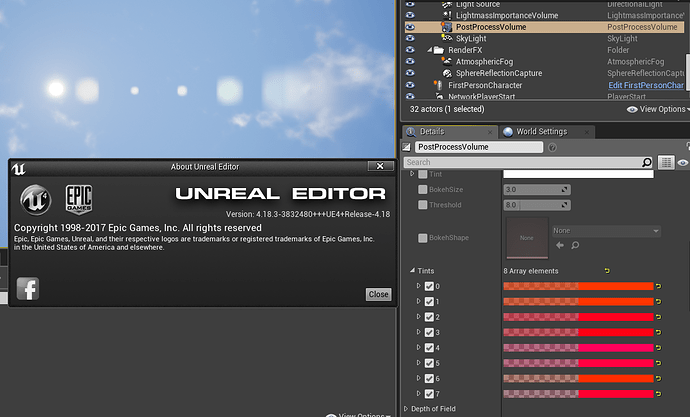 It’s possible! What GPU are you running? What driver version?

Double check the post process volume has “Unbound” enabled (in 4.19 and higher its renamed to “Infinite Extent - Unbound”).

It’s possible that it’s being overridden somewhere in blueprint. Do you have any blueprint nodes making changes to any of the PP volume properties?

Open up your character’s blueprint, select the Camera component and make the same changes to it’s settings. Does it show up with your colors in game?

So after some follow-up testing, it appears that if you create a project in 4.17 (like I did) and then migrate the project forward to newer engine versions, the feature works as shown in my previous screenshots. Trying to do this in a new level in an engine version after 4.17 does not work, so I have logged this bug as UE-60645.

I made the issue public, but it might take a while before you can track the report’s status as the issue is reviewed by our development staff. Please be aware that this issue may not be prioritized or fixed soon.

I’ve recently switched to 1080Ti. and issue still there.

Great job with the tracking it down. I think I need to recreate my legacy projects i’m using for testing in newer engine.

The team at my studio has been asking about this issue, so I’ve been investigating it. We’re using a custom-built version of 4.19.2 that we’ve compiled from source. This might get a little technical, but if you’re compiling the engine from source, you might be able to use this fix.

While running the engine in debug, it looks like the tints are being set, but internally, the flag that says you have overridden them is never getting set to true. I believe this is being caused by the LensFlareTints array in the PostProcessSettings struct being a native array and how the UPROPERTY macro is interacting with it. The fix I found was to change the array to using a TArray in Scene.h:

And then changing Scene.cpp to reflect this:

and so on for the other 7 tints.

This seems to have fixed the issue for us. Instead of having 8 separate checkboxes for lens flare tints, you end up with just one to override them all.