Hi everyone, I followed the “Set up Android” steps from the documentation, using the version of AndroidWorks that ships with the engine but I can´t seem to be able to debug the application once it´s launched on my Android phone . Here are the steps I take to deploy my C+±based game to the device:

I have tried to connect to My Oneplus X but it seems impossible.

Please do help me a little bit with this.

Also to use 2013, if you aren’t already, you’ll need to use a version of the engine built from source. You can find more information about another user’s experience attempting to use this as well here: How do we re-enable Android Debugging in 4.10? - Feedback for Unreal Engine team - Unreal Engine Forums

Is this still the case? Everything looks good in VS2015 except the GDB server startup. 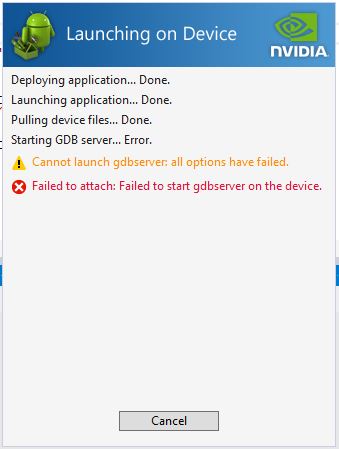 I can log but debugging is gonna be a sloooow process this way!

Hi Matthew, Thanks for your response.

I’m trying to debug the CPU on a Pixel XL. Looks like 99% or my code is behaving as expected on Android but getting the last 1% working using logging only will be painful. Guess I’ll try VS 2017.

Now getting the following error when I try to run / build the DebugGame Android sku:

File doesn’t exist afaik - there is a cpu_features.c file. So perhaps I’m missing some followup patch on the original installation.

That was just a matter of setting permissions on the folder, followed by another one (Program Files (x86)\Microsoft Visual Studio\2017\Community\Apps\apache-ant-1.9.3\bin).

Still missing something though - I can build the android debug build but don’t have any device options. Perhaps need to reinstall tegra or something to get working in VS2017?

A reinstall of tegra nsight didn’t help - looking at their documentation I don’t see VS2017 on the supported version list. Also - looking at the VS2017 Android overview they talk about debugging the ARM platform which is not present in UE4 (Android). I guess the ARM settings would need to be transposed to Android.

I apologize for the delay but are you still experiencing this issue? If so, please let me know and I’ll attempt to continue investigating this issue. In the meantime, I’ll be marking this issue as resolved for tracking purposes.

Never did get debugging - using output to diagnose problems and it’s a bit painful. I’m still on 4.17 fwiw.

A set of official instructions on how to debug C++ on an Android device would be golden!