While I can test if a particular object implements an Interface in blueprints I cannot cast that object to that interface and use it as that interface. Under the circumstances I am overriding functions within the blueprints I will NOT have the concrete version of that object, they are being sent in as base objects such as AActor or UObject.

I’m building the system of interfaces to orchestrate how seemingly unrelated Actor objects communicate with each other. I’ve build the interface functions to take in any AActor object and test of that Actor has the appropriate interface for performing actions on. This works beautifully in C++. However Blueprint seems to be a different beast.

So Lets say I have two Interfaces:

Basically I have certain functions that will be overriden in blueprint. Because the interactions can happen between Actor and Actor or Actor and Pawn, or UObject and Actor and Pawn. Since these are the basic Subclasses of all UE4 objects the interfaces expect the least common denominator of the three (somethings will never be on things that are not actors so the least common denominator is Actor). So in blueprint I need away to cast an UObject, Actor, or Pawn to the desired Interface to work with it… however that functionality does not seem to exist…

I will be looking into this issue. I did have some clarification questions for you, though.

I am currently using the 4.5 version of the engine installed from launcher.

To Create a new Interface I usually directly add the .h and .cpp files to my project from inside Visual Studio, Aptly named “MyGameInterface.h”

The following is a direct copy of the InteractableActorInterface.h

The following is a direct copy of the InteractableActorInterface.cpp

I apologize the next part get’s a bit wordy, I am more than willing to answer any questions if you have any.

Currently most of the implementation of the blueprint is occuring in C++ on the base object level. Then the rest of the work will be done in blueprint as concrete objects are made from these base C++ classes with functionality added at specific points.

Every “InteractableActor” in the game implements this interface, be it another NPC, A Trigger button, a Pickup Item, or a Treasure Chest. The idea is when the Player get close enough to interact with one of these things in the game world a message “Press E to [Open, Pickup, steal, etc]” appears. They Press the E button and they perform a what ever interaction the object is designated to perform.

To attempt to really clarify these are the exact steps. Trying to provide as much information as I can hopefully this is me just not knowing what I’m doing haha.

Ok, so the issue here is that you aren’t marking your functions up correctly so that they can be exposed to Blueprint.
Once that is done you will see some Interface Message nodes that show up in the context menu that will transparently handle casting to the interface class and calling functions from it.

If you want to define a default implementation in native code you should take a look at BlueprintNativeEvent instead of BlueprintImplementableEvent:

Note the absence of virtual - marking the function up as Implementable involves the generated code including a stub that calls the correct Blueprint functionality.

I really wanted it to be so Twiddle haha. I tried it out but my Interface is a Pure Virtual Class with no implementation. If i decorate the function with BlueprintImplementableEvent or Callable I get an Error

error: In InteractingAgentInterface: BlueprintImplementableEvents in Interfaces must not be declared virtual.

Because this interface needs to be implementable in C++ the functions must be virtual. I don’t really have plans on implementing these interfaces IN blueprint but I need Blueprint to Cast to them… seems to be a tricky thing to do.

Have you tried BlueprintNativeEvent, and implementing Func_Implementation as a function that contains the actual functionality? I’m just running a test to see if you can implement Func_Implementation in a derived class, but if that works I think it would give you the functionality you desire without having to explicitly mark your original function as virtual.
It looks like if you use BlueprintNativeEvent, then the auto-generated prototype for your FuncName_Implementation function does have the virtual keyword, so I think you should be good with that.

Eg: this is part of some autogenerated code from UHT:

You’ll probably need to provide an empty stub rather than a pure virtual function in your interface in order to keep the autogenerated thunk that calls it happy, but nevertheless, I don’t see how it wouldn’t work.

Unfortuantly I do not think this will work. I answered a very similar question with someone trying to Override the Implementation of a BlueprintNativeEvent. Currently the way I have been handeling Overriding of a C++ function that I also want to possibily be overriden in a Blueprint is to create two functions

I do know that there seems to “possibly” be a way to create your own custom thunk in UE4 using one of the function specifies… I think it is CustomThunk lol but I have absolutely no idea how that works or how to do it.

What was the actual issue that you encountered when trying it?
There is CustomThunk, yes, but I don’t see why you couldn’t override the Implementation thunk if it’s marked as virtual… I will try it myself soon, but I’m hip-deep in squishing another bug at present.

I was not able to test it at the moment, But I am not sure if you can override an Implementable function even if it is marked virtual. I helped someone else with that same issue where he was trying to override an BlueprintNativeEvent but his C++ sub classed override was not being called. That was the solution I came up with. granted that was version 4.4 but we where having issues with it. I thought it was just how the UBT worked.

Good news - it works.
I just added the following to a Character subclass:

I got the text as well as a breakpoint in the parent class’ function being hit.

You gotta make sure you’re overriding FunctionName**_Implementation** rather than just FunctionName. I suspect this might be why your previous attempt failed.

That is good news. I’ll give it a shot, though it urks me to utilize an implemented class… I come from a long ancient line of “Multiple inheritance is evil” disciplines and it’s a bit ingrained… I have an exception for Pure Virtual Classes because of the lighter overhead. but if it works it works. I’d still like to see a Pure Abstract Class work with this in the future though. UE4 may need a new UFUNCTION Decorator to indicate such a thing.

If you look at the definition for BlueprintNativeEvent, it is documented there that you’ll be actually implementing FuncName_Implementation and leaving FuncName to the code generation.
I should also note - I didn’t actually test with a pure virtual base - so perhaps you should try that and see how you go. I merely tested that a subclass can override the _Implementation function from a parent, but in my test case Character did have an empty stub already.

using a Pure Virtual Base Class with a BlueprintNativeEvent function does not work nor does it work for BlueprintImplementableEvent because it is composed of Pure Virtual Functions. You have to make the interface basic virtual functions that do not require overriding in the sub classes, which is what I want out of the C++ sub classes. I want to force a developer using the system to have to implement the interface explicitly.

However It is a philosophical problem really for me. I like the C# specification of One base class and all the interfaces you want and I tend to carry that over utilizing Abstract Base Classes composed entirely of Pure Virtual Functions with no properties or fields and it MUST be implemented by the inheriting class… I’ve no idea if there is a performance benefit or penalty for it but it feels cleaner haha.

A new Specifier like BlueprintInterfaceEvent specifically for Abstract Base Classes would be nice. Technically the BlueprintNativeEvent does cover it but it’s a bit… non-intuitive from the C++ side… maybe I’m asking too much haha but it would be nice.

Actually though if you really wanted to get crazy with it you could build two interfaces… one for C++ implementation and one for Blueprint… but that’s probably overkill, over engineering, over thinking, and most likely over complicating it… haha

Well, the issue is that any tags you provide like BlueprintImplementable, BlueprintNativeEvent etc, are used for automatic code generation, meaning that under-the-hood you are always getting some sort of concrete class being created regardless. If nothing else, the thunk that BlueprintNativeEvent creates has a concrete implementation which is calling your Func_Implementation function, so you’ll never be able to have a pure virtual class that does this, only an abstract one.

I think some of the philosophical dissonance you are experiencing comes down to the fact that C++ doesn’t have the concept of an interface as a first party object in the same way that C# does. As far as performance overhead goes, I’d say that factoring in C#'s compile-to-MSIL-then-interpret-bytecode-at-runtime approach, you’ll probably see a similar overhead with interfaces vs multiple inheritance in the sense that there’s still a vtable that helps to resolve function calls at runtime.

If you really want to force the developer to override your base implementation, my suggestion is to create a macro like CHECK_INTERFACE_IMPLEMENTED() that you can place in your base class.
This macro would simply throw an exception with ‘func x not implemented/overridden’.

I see from a quick look through the code base that AssertionMacros.h already has

So my advice would be to use the approach I already mentioned, and simply put calls to unimplemented() in your default implementation.

All Agreed. But to be fair I thought that was what the UInterface was for, To be a representation of the IInterface within the blueprint system that defines the actual interface…

Take a look at this question one of my students asked a while back. It clarifies a little bit of the difference between the UInterface and IInterface. The latter is the thing which is actually used by the compiler to extend the vtable.

Well that makes since. While I still stand that the use of a Pure Virtual Class would be preferable… Using an Abstract Base Class and overriding the Implementation function is the way to go with UE4.

I finally got a chance to try this out but the results where quite upsetting. The Interface was implemented and compiled in C++ but I still was unable to Cast To it via Blueprints. Worst, in blueprints the normal functions defined in the interface where not accessible… only options for the"Implementation" functions where there. My Implementation follows

In the Blueprints attempting to cast to IInteractingAgentInterface 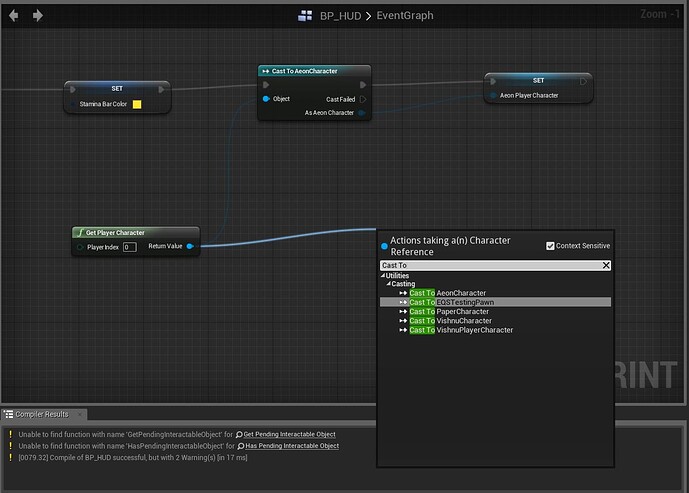 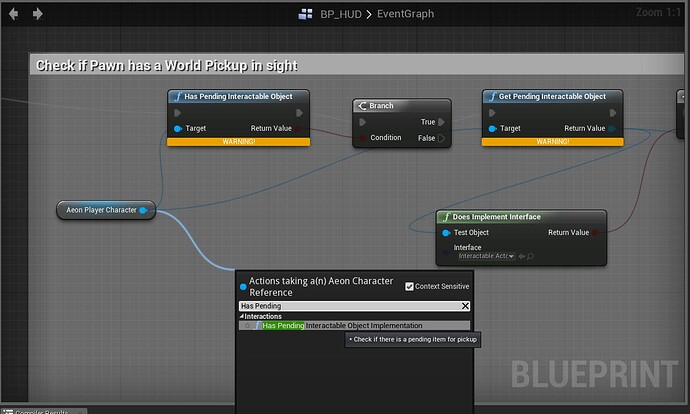 The warning on both those nodes says It cannot find that function.