Calibrating weapons and objects to the skeleton in Advanced Locomotion System v4?

I made a post about calibrating the left hand of the character to the gun’s barrel or something, but this new forum doesn’t seem to show it. I fear the question got deleted. It had a lot of good people give a lot of good answers but when I got around to implimenting them, I find that the thread doesn’t exist anymore! So here, I try again.

The gun is being placed nicely in my right hand. It’s the left hand, if there is a way to fix the left hand to the gun so that it remains stuck regardless of the movement. Currently, my left hand drifts faster in the direction of the gun is being moved and doesn’t look like it’s holding the gun.

@Amanda.Schade
Not the first topic to have disappeared.
It doesn’t even show within his recent interactions for us. Can you/someone see if it is possible to recover the missing data?

@Zarrar2802
I left at, I’ll be making a tutorial on it as time permits.
Unfortunately I worked 16 hours yesterday, and it’s not looking much better through next week…

The short of it is:
You need to properly setup so that you place the IK bone (ik_hand_l in this case) programmatically where needed.

“Where needed” should be handled by something on the weapon either a socket or a bone in the weapon.
(Note that a complex rig will also have a weapon bone so that weapon movement can be animated for complex stuff like reloads: imagine a crossbow where you have to use your foot to hold and pull up the string with 2 hands for instance, or a shotgun where the the muzzle breaks vs a pump as part of the character bones)

You read the location of the socket and move the IK bone to it.

Then, you use the IK nodes of choice (Fabrik, ccid, or just the hand ik stuff like content examples) to solve the Ik chain into place with minimal “bad” rotations.

That’s basically the base for it.
From then on your IK will work, and you can actually use animations to trigger it on and off with custom curves.

@Zarrar2802 - During the import some topics/posts didn’t make it across and we’re working to have them restored asap. So sorry to hear one of yours got caught in it - we appreciate you all taking your time to help and support each other and want to make sure that info can stay for others to learn from.

I’ll try to implement that, but a tutorial would be really nice. Thanks though <3

Okay I’ll wait, I hope that post gets imported back soon

Hello, did you finally find any tutorial on this? or how did you solve the problem?

Not really, I don’t think my older post got migrated and as for the IK, I haven’t touched that in a while. Have been working on other stuff for my game. Though I feel maybe the problem may be with the weighting of my skeleton to the bones. Haven’t looked into it yet but you should try the method recommended by @MostHost_LA

As a simple solution I have manually modified the Effector Location of the TwoBoneIK of left hand so it is like adding an offset to the original location, as I have kept the bone space. I’ve got the correct position for the rifle overlay, but now all the overlays which use the left hand IK have that offset. Next step will be implementing a function which sets the correct Effector Location based on the current overlay.

I tried implementing it with the weapon socket but the animations looked horrible. 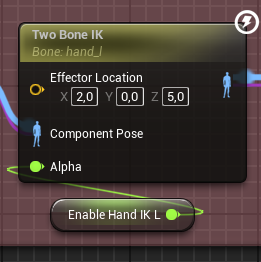